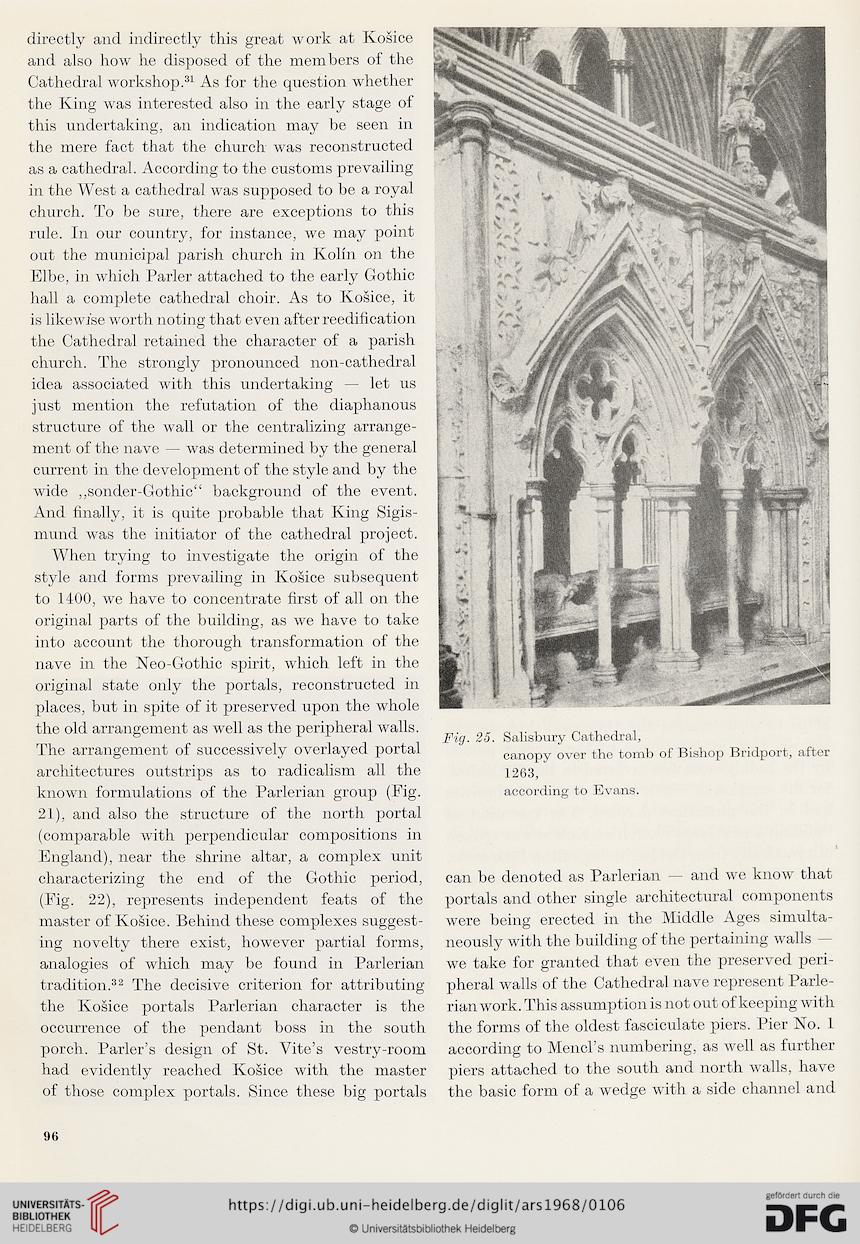 Information about OCR text
directly and indirectly this great work at Košice
and also how he disposed of the members of the
Cathédral workshop.31 As for the question whether
the King was interested also in the early stage of
this undertaking, an indication may be seen in
the mere fact that the church was reconstructed
as a cathédral. According to the customs prevailing
in the West a cathédral was supposed to be a royal
church. To be sure, there are exceptions to this
rule. In our country, for instance, we may point
out the municipal parish church in Kolín on the
Elbe, in which Parler attached to the early Gothic
hall a complété cathédral choir. As to Košice, it
is likewïse worth noting that even after reedification
the Cathédral retained the character of a parish
church. The strongly pronounced non-cathedral
idea associated with this undertaking — let us
just mention the réfutation of the diaphanous
structure of the wall or the centralizing arrange-
ment of the nave — was determined by the general
current in the development of the style and by the
wide „sonder-Gothic“ background of the event.
And finally, it is quite probable that King Sigis-
mund was the initiator of the cathédral project.
When trying to investigate the origin of the
style and forms prevailing in Košice subséquent
to 1400, we hâve to concentrate first of ail on the
original parts of the building, as we hâve to take
into account the thorough transformation of the
nave in the Neo-Gothic spirit, which left in the
original state only the portais, reconstructed in
places, but in spite of it preserved upon the whole
the old arrangement as well as the peripheral walls.
The arrangement of successively overlayed portai
architectures outstrips as to radicalism ail the
known formulations of the Parlerian group (Fig.
21), and also the structure of the north portai
(comparable with perpendicular compositions in
England), near the shrine altar, a complex unit
characterizing the end of the Gothic period,
(Fig. 22), represents independent feats of the
master of Košice. Behind these complexes suggest-
ing novelty there exist, however partial forms,
analogies of which may be found in Parlerian
tradition.32 The décisive criterion for attributing
the Košice portais Parlerian character is the
occurrence of the pendant boss in the south
porch. Parler’s design of St. Vite’s vestry-room
had evidently reached Košice with the master
of those complex portais. Since these big portais


Fig. 25. Salisbury Cathédral,
eanopy over the tomb of Bishop Bridport, after
1263,
according to Evans.

can be denoted as Parlerian — and we know that
portais and other single architectural components
were being erected in the Middle Ages simulta-
neously with the building of the pertaining walls -
we take for granted that even the preserved peri-
pheral walls of the Cathédral nave represent Parle-
rian work. This assumption is not out of keeping with
the forms of the oldest fasciculate piers. Pier No. 1
according to Mencl’s numbering, as well as further
piers attached to the south and north walls, hâve
the basic form of a wedge with a side channel and