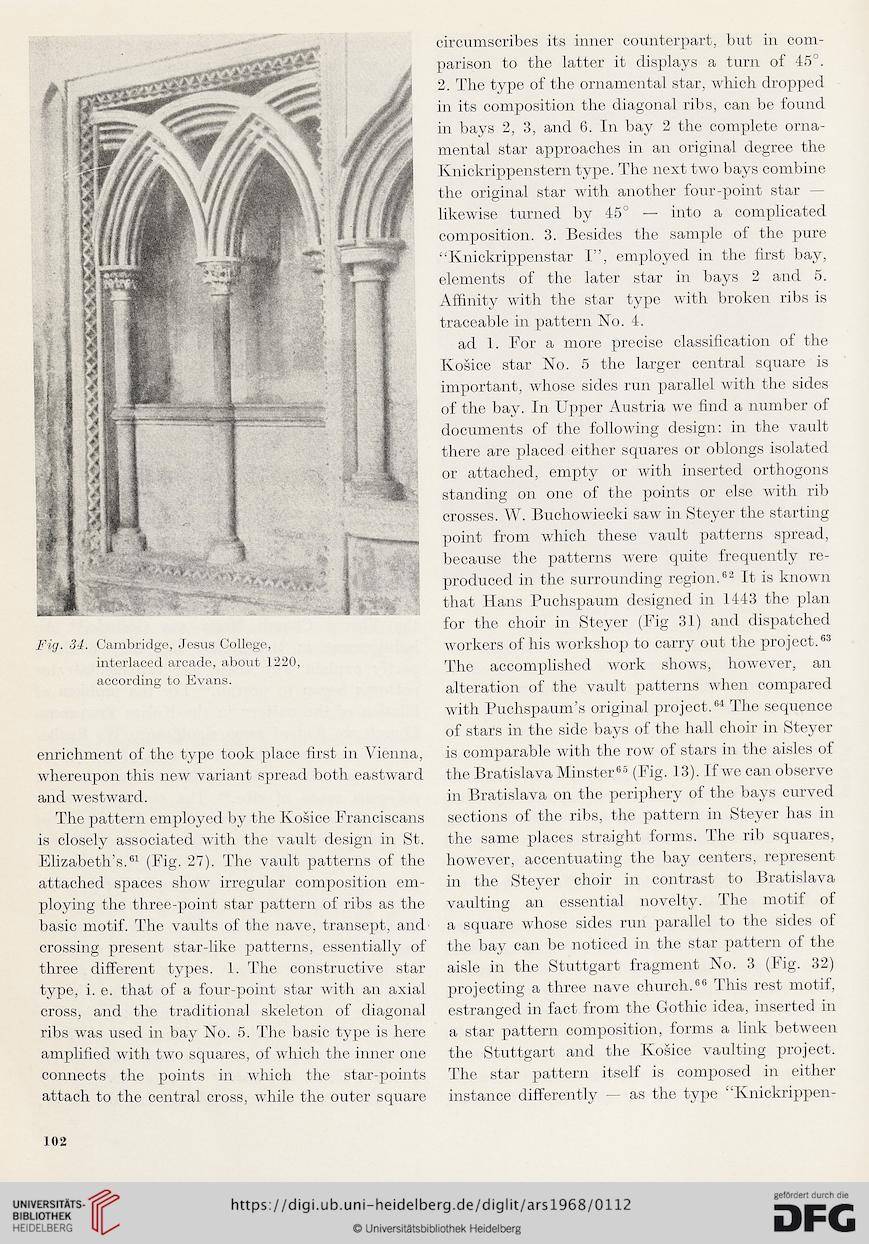 Fig. 34. Cambridge, Jesus College,
interlaced arcade, about 1220,
according to Evans.

enrichment of the type took place first in Vienna,
whereupon this new variant spread both eastward
and westw ard.
The pattern employed by the Košice Franciscans
is dosely associated with the vault design in St.
Elizabeth’s.61 (Fig. 27). The vault patterns of the
attached spaces show irregulär composition em-
ploying the three-point star pattern of ribs as the
basic motif. The vaults of the nave, transept, and
Crossing present star-like patterns, essentially of
three different types. 1. The constructive star
type, i. e. that of a four-point star with an axial
cross, and the traditional skeleton of diagonal
ribs was ušed in bay No. 5. The basic type is here
amplified with two squares, of which the inner one
connects the points in which the star-points
attach to the central cross, while the outer square

circumscribes its inner counterpart, but in com-
parison to the latter it displays a turu of 45°.
2. The type of the ornamental star, which dropped
in its composition the diagonal ribs, can be found
in bays 2, 3, and 6. In bay 2 the complété orna-
mental star approaches in an original degree the
Knickrippenstern type. The next two bays combine
the original star with another four-point star -
likewise turned by 4-5° — into a complicated
composition. 3. Besides the sample of the pure
“Knickrippenstar I”, employed in the first bay,
éléments of the later star in bays 2 and 5.
Affinity with the star type with broken ribs is
traceable in pattern No. 4.
ad 1. For a more précisé classification of the
Košice star No. 5 the larger central square is
important, whose sides run parallel with the sides
of the bay. In Upper Austria we find a number of
documents of the foliowing design: in the vault
there are placed. either squares or oblongs isolated
or attached, empty or with inserted orthogons
standing on one of the points or else with rib
crosses. W. Buchowiecki saw in Steyer the starting
point from which these vault patterns spread,
because the patterns were quite frequently re-
produced in the surrounding region.62 It is known
that Hans Puchspaum designed in 1443 the plan
for the choir in Steyer (Fig 31) and dispatched
workers of his workshop to carry out the project.63
The accomplished work shows, however, an
alteration of the vault patterns when compared
with Puchspaum’s original project.64 The sequence
of stars in the side bays of the hall choir in Steyer
is comparable with the row of stars in the aisles of
the Bratislava Minster65 (Fig. 13). If we can observe
in Bratislava on the periphery of the bays curved
sections of the ribs, the pattern in Steyer has in
the same places straight forms. The rib squares,
however, accentuating the bay centers, represent
in the Steyer choir in contrast to Bratislava
vaulting an essential novelty. The motif of
a square whose sides run parallel to the sides of
the bay can be noticed in the star pattern of the
aisle in the Stuttgart fragment No. 3 (Fig. 32)
projecting a three nave church.66 This rest motif,
estranged in fact from the Gothic idea, inserted in
a star pattern composition, forms a link between
the Stuttgart and the Košice vaulting project.
The star pattern itself is composed in either
instance differently — as the type “Knickrippen-