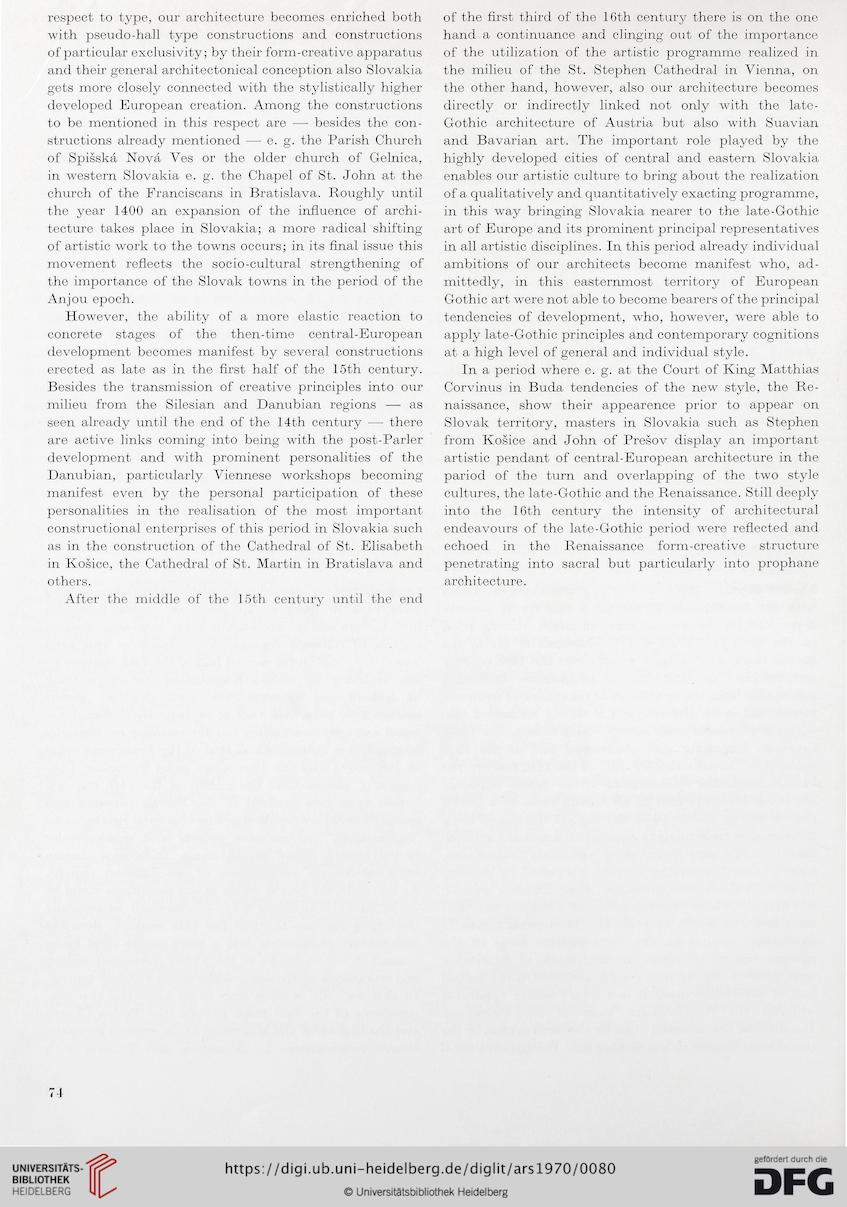 Information about OCR text
respect to type, our architecture becomes enriched both
with pseudo-hall type constructions and constructions
of particular exclusivity; by their form-creative apparatus
and their general architectonical conception also Slovakia
gets more dosely connected with the stylistically higher
developed European création. Among the constructions
to be mentioned in this respect are — besides the con-
structions already mentioned — e. g. the Parish Church
of Spišská Nová Ves or the older church of Gelnica,
in western Slovakia e. g. the Chapel of St. John at the
church of the Franciscans in Bratislava. Roughly until
the year 1400 an expansion of the influence of archi-
tecture takes place in Slovakia; a more radical shifting
of artistic work to the towns occurs; in its final issue this
movement reflects the socio-cultural strengthening of
the importance of the Slovák towns in the period of the
Anjou epoch.
However, the ability of a more elastic reaction to
concrète stages of the then-time central-European
development becomes manifest by several constructions
erected as late as in the first half of the 15th Century.
Besides the transmission of Creative principles into our
milieu from the Silesian and Danubian régions — as
seen already until the end of the 14th Century — there
are active links coming into being with the post-Parler
development and with prominent personalities of the
Danubian, particularly Viennese workshops becoming
manifest even by the personal participation of these
personalities in the réalisation of the most important
constructional enterprises of this period in Slovakia such
as in the construction of the Cathédral of St. Elisabeth
in Košice, the Cathédral of St. Martin in Bratislava and
others.
After the middle of the 15th Century until the end

of the first third of the 16th Century there is on the one
hand a continuance and clinging out of the importance
of the utilization of the artistic programme realized in
the milieu of the St. Stephen Cathédral in Vienna, on
the other hand, however, also our architecture becomes
directly or indirectly linked not only with the late-
Gothic architecture of Austria but also with Suavian
and Bavarian art. The important role played by the
highly developed cities of central and eastern Slovakia
enables our artistic culture to bring about the realization
of a qualitatively and quantitatively exacting programme,
in this way bringing Slovakia nearer to the late-Gothic
art of Europe and its prominent principal représentatives
in ail artistic disciplines. In this period already individual
ambitions of our architects become manifest who, ad-
mittedly, in this easternmost territory of European
Gothic art were not able to become bearers of the principal
tendencies of development, who, however, were able to
apply late-Gothic principles and contemporary cognitions
at a high level of general and individual style.
In a period where e. g. at the Court of King Matthias
Corvinus in Buda tendencies of the new style, the Re-
naissance, show their appearence prior to appear on
Slovák territory, masters in Slovakia such as Stephen
from Košice and John of Prešov display an important
artistic pendant of central-European architecture in the
pariod of the turn and overlapping of the two style
cultures, the late-Gothic and the Renaissance. Still deeply
into the 16th Century the intensity of architectural
endeavours of the late-Gothic period were reflected and
echoed in the Renaissance form-creative structure
penetrating into sacral but particularly into prophane
architecture.