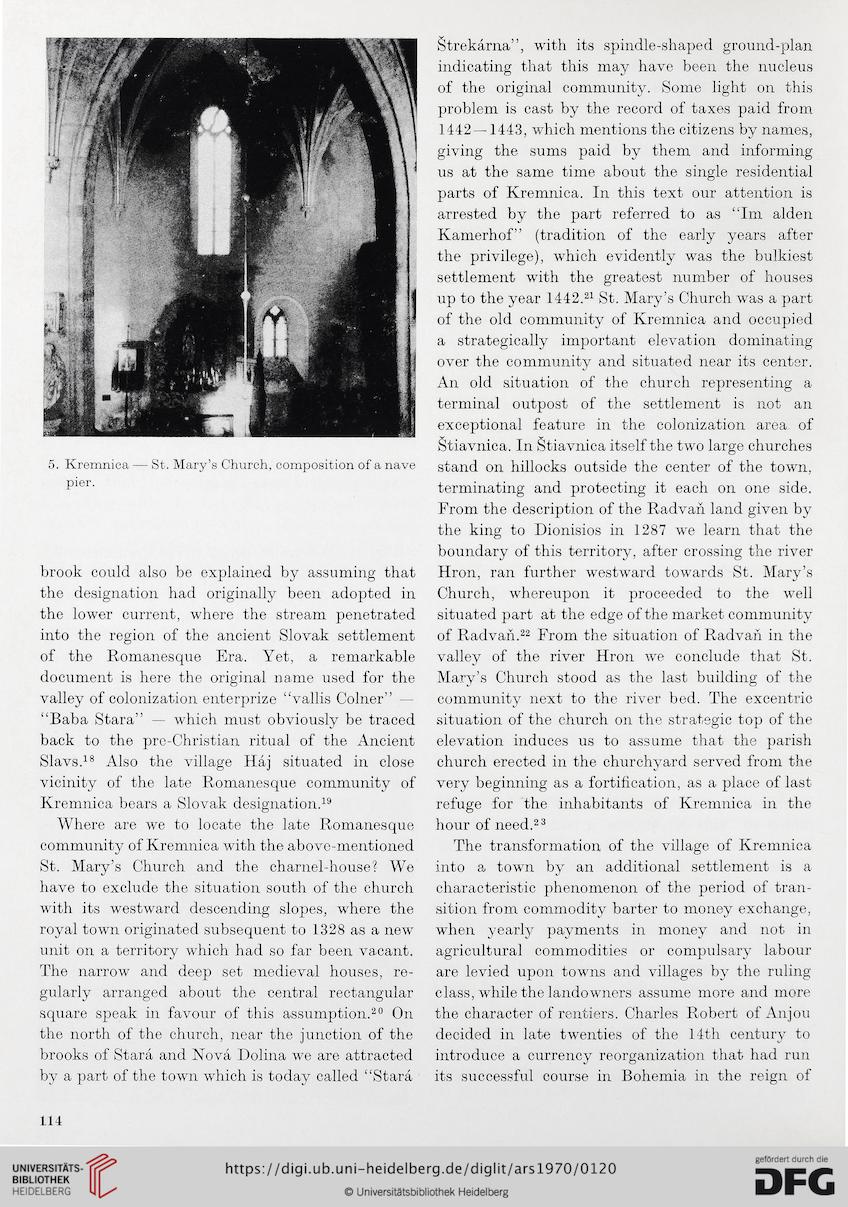 brook could also be explained by assuming that
the désignation had originally been adopted in
the lower current, where the stream penetrated
into the region of the ancient Slovák settlement
of the Romanesque Era. Yet, a remarkable
document is here the original name used for the
valley of colonization enterprize “vallis Colner” —
“Baba Stara” — which must obviously be traced
back to the pro-Christian ritual of the Ancient
Slavs.18 Also the village Háj situated in close
vicinity of the late Romanesque community of
Kremnica bears a Slovák désignation.19
Where are we to locate the late Romanesque
community of Kremnica with the above-mentioned
St. Mary’s Church and the charnel-house? We
hâve to exclude the situation south of the church
with its westward descending slopes, where the
royal town originated subséquent to 1328 as a new
unit on a territory which had so far been vacant.
The narrow and deep set medieval houses, re-
gu] arly arranged about the central rectangular
square speak in favour of this assumption.20 On
the north of the church, near the junction of the
brooks of Stará and Nová Dolina we are attracted
by a part of the town which is today called “Stará

Štrekárna”, with its spindle-shaped ground-plan
indicating that this may hâve been the nucléus
of the original community. Some light on this
problém is cast by the record of taxes paid from
1442—1443, which mentions the citizens by names,
giving the sums paid by them and informing
us at the same time about the single residential
parts of Kremnica. In this text our attention is
arrested by the part referred to as “Im alden
Kamerhof” (tradition of the early years after
the privilège), which evidently was the bulkiest
settlement with the greatest number of houses
up to the year 1442.21 St. Mary’s Church was a part
of the old community of Kremnica and occupied
a strategically important élévation dominating
over the community and situated near its center.
An old situation of the church representing a
terminal outpost of the settlement is not an
exceptional feature in the colonization area of
Štiavnica. In Štiavnica itself the two large churches
stand on hillocks outside the center of the town,
terminating and protecting it each on one side.
From the description of the Radvaň land given by
the king to Dionisios in 1287 we learn that the
boundary of this territory, after Crossing the river
Hron, ran further westward towards St. Mary’s
Church, whereupon it proceeded to the well
situated part at the edge of the market community
of Radvaň.22 From the situation of Radvaň in the
valley of the river Hron we conclude that St.
Mary’s Church stood as the last building of the
community next to the river bed. The excentric
situation of the church on the strategie top of the
élévation induces us to assume that the parish
church erected in the churchyard served from the
very beginning as a fortification, as a place of last
refuge for the inhabitants of Kremnica in the
hour of need.23
The transformation of the village of Kremnica
into a town by an additional settlement is a
characteristic phenomenon of the period of tran-
sition from commodity harter to money exchange,
when yearly payments in money and not in
agricultural Commodities or compulsary labour
are levied upon towns and villages by the ruling
class, while the landowners assume more and more
the character of rentiers. Charles Robert of Anjou
decided in late twenties of the 14th Century to
introduce a currency reorganization that had run
its successful course in Bohemia in the reign of