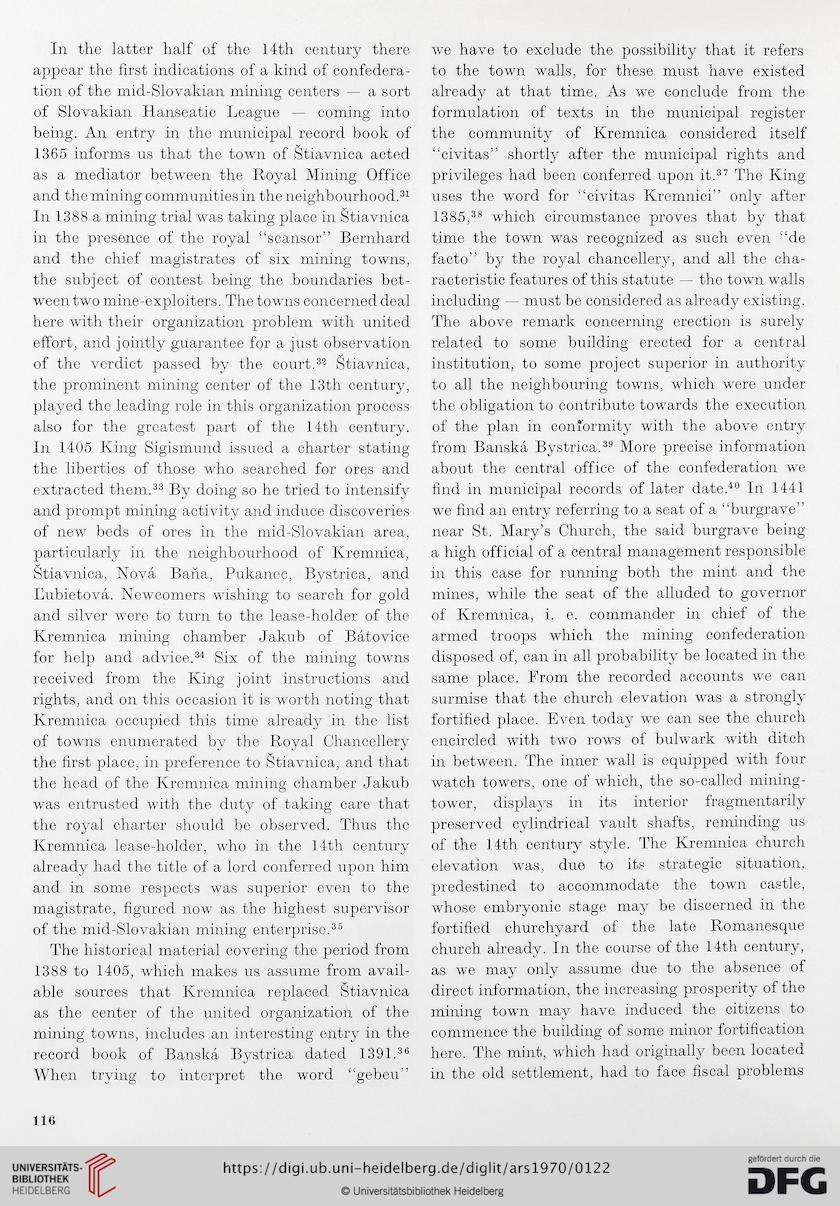 Information about OCR text
In the latter half of the 14th Century there
appear the first indications of a kind of confédéra-
tion of the mid-Slovakian mining centers — a sort
of Slovakian Hanseatic League — coming into
being. An entry in the municipal record book of
1365 informs us that the town of Štiavnica acted
as a mediator between the Royal Mining Office
and the mining communities in the neighbourhood.31
In 1388 a mining trial was taking place in Štiavnica
in the presence of the royal “scansor” Bernhard
and the chicf magistrates of six mining towns,
the subject of contest being the boundaries bet-
wecn two mine-exploiters. The towns concerned deal
here with their Organization problém with united
effort, and jointly guarantee for a just observation
of the verdict passed by the court.32 Štiavnica,
the prominent mining center of the 13th Century,
played the leading role in this Organization process
also for the groatest part of the 14th Century.
In 1405 King Sigismund issued a charter stating
the liberties of those who searched for ores and
extracted them.33 By doing so he tried to intensify
and prompt mining activity and induce discoveries
of new beds of ores in the mid-Slovakian area,
particularly in the neighbourhood of Kremnica,
Štiavnica, Nová Baňa, Pukanec, Bystrica, and
Eubietová. Newcomers wishing to search for gold
and silver were to turn to the lease-holder of the
Kremnica mining chamber Jakub of Bátovice
for help and ad vice.34 Six of the mining towns
received from the King joint instructions and
rights, and on this occasion it is worth noting that
Kremnica occupied this time already in the list
of towns enumerated by the Royal Chancellery
the first place, in preference to Štiavnica, and that
the hcad of the Kremnica mining chamber Jakub
was entrusted with the duty of taking care that
the royal charter should be observed. Thus the
Kremnica lease-holder, who in the 14th Century
already had the title of a lord conferred upon him
and in some respects was superior even to the
magistráte, figured now as the highest Supervisor
of the mid-Slovakian mining enterprise.35
The historical material covering the period from
1388 to 1405, which makes us assume from avail-
able sources that Kremnica replaced Štiavnica
as the center of the united organization of the
mining towns, indu des an interesting entry in the
record book of Banská Bystrica dated 1391.36
When trying to interpret the word “geben"

we háve to exelude the possibility that it refers
to the town walls, for these must háve existed
already at that time. As we conclude from the
formulation of texts in the municipal register
the community of Kremnica considered itself
“civitas” shortly after the municipal rights and
privilèges had been conferred upon it.37 The King
uses the word for “civitas Kremnici’’ only after
1385,38 which circumstance proves that by that
time the town was recognized as such even “de
facto” by the royal chancellery, and all the cha-
racteristic features of this statute — the town walls
including — must be considered as already existing.
The above remark concerning érection is surely
related to some building erected for a central
institution, to some project superior in authority
to all the neighbouring towns, which were under
the obligation to contribute towards the execution
of the plan in conformity with the above entry
from Banská Bystrica.39 More précisé information
about the central office of the confédération we
find in municipal records of later date.40 In 1441
we find an entry referring to a seat of a “burgrave”
near St. Mary’s Church, the said burgrave being
a high official of a central management responsible
in this case for running both the mint and the
mines, while the seat of the alluded to governor
of Kremnica, i. e. commander in chief of the
armed troops which the mining confédération
disposed of, can in ail probability be located in the
game place. From the recorded accounts we can
surmise that the church élévation was a strongly
fortified place. Even today we can see the church
encircled with two rows of bulwark with ditch
in between. The inner wall is equipped with four
watch towers, one of which, the so-called mining-
tower, displays in its inferior fragmentarily
preserved cylindrical vault shafts, reminding us
of the 14th Century style. The Kremnica church
élévation was, due to its strategie situation,
predestined to accommodate the town castle,
whose embryonic stage may be discerned in the
fortified churchyard of the late Romanesque
church already. In the course of the 14th Century,
as we may only assume due to the absence of
direct information, the increasing prosperity of the
mining town may hâve induced the citizens to
commence the building of some minor fortification
here. The mint, which had originally been located
in the old settlement, had to face fiscal problems