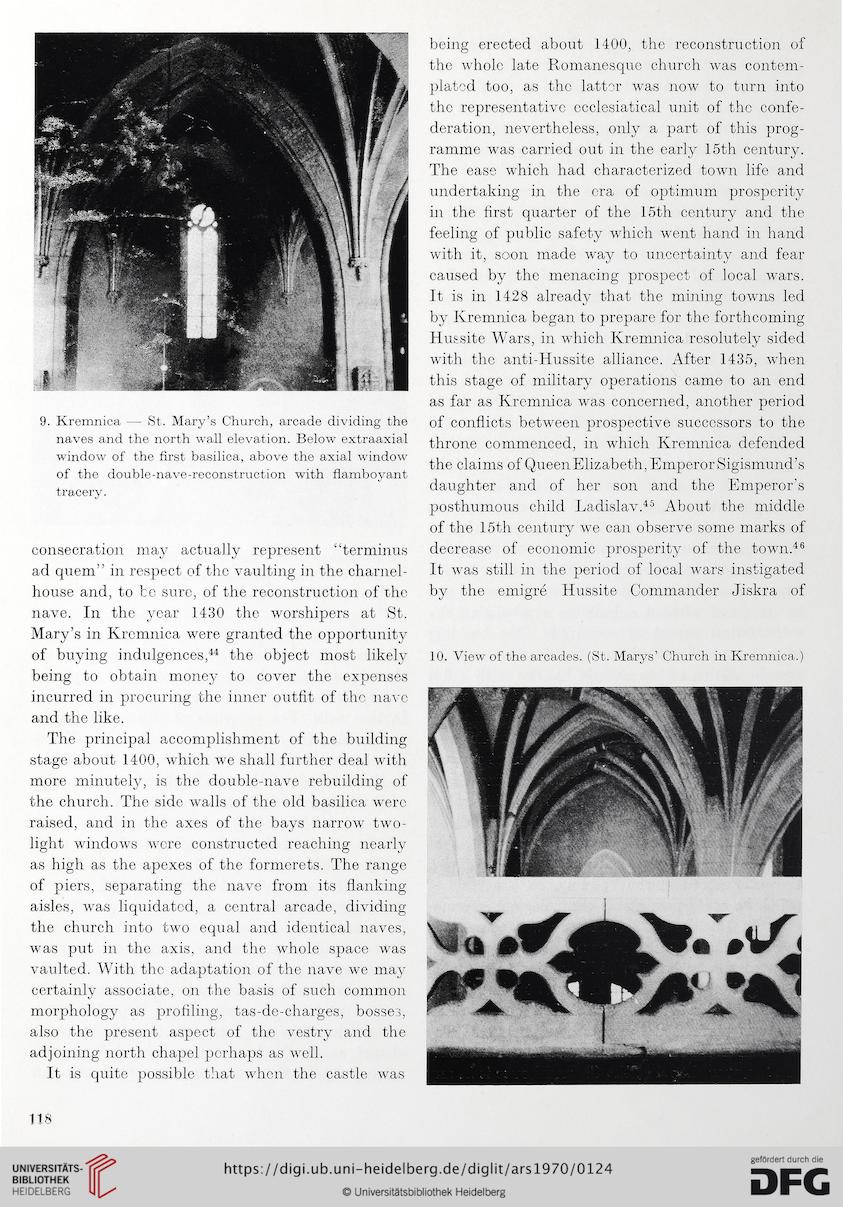 9. Kremnica — St. Mary’s Church, arcade dividing the
naves and the north wall élévation. Below extraaxial
window of the first basilica, above the axial window
of the double-nave-reconstruction with flamboyant
tracer y.

consécration may actually represent “terminus
ad quem” in respect of the vaulting in the charnel-
house and, to te sure, of the reconstruction of the
nave. In the ycar 1430 the worshipers at St.
Mary’s in Kremnica were granted the opportunity
of buying indulgences,44 the object most likely
being to obtain money to cover the expenses
incurred in procuring the inner outfit of the navo
and the like.
The principal accomplishment of the building
stage about 1400, which we shall further deal with
more minutely, is the double-nave rebuilding of
the church. The sidc walls of the old basilica were
raised, and in the axes of the bays narrow two-
light Windows were constructed reaching nearly
as high as the apexes of the formerets. The range
of piers, separating the nave from its flanking
aisles, was liquidated, a central arcade, dividing
the church into two equal and identical naves,
was put in the axis, and the whole space was
vaulted. With the adaptation of the nave we may
certainly associate, on the basis of such common
morphology as profiling, tas-de-charges, bosses,
also the present aspect of the vestry and the
adjoining north chapel perhaps as well.
It is quite possible that whon the castle was

being erected about 1400, the reconstruction of
the whole late Romanesque church was contem-
plated too, as the lattor was now to turn into
the représentative ccclesiatical unit of the confé-
dération, nevertheless, only a part of this prog-
ramme was carried out in the early 15th Century.
The ease which had characterized town life and
undertaking in the era of optimum prosperity
in the first quarter of the 15th Century and the
feeling of public safety which went hand in hand
with it, soon made way to uncertainty and fear
caused by the menacing prospect of local wars.
It is in 1428 already that the mining towns led
by Kremnica began to préparé for the fortheoming
Hussite Wars, in which Kremnica resolutely sided
with the anti-Hussite alliance. After 1435, when
this stage of military operations came to an end
as far as Kremnica was concerned, another period
of conflicts between prospective successors to the
throne commenced, in which Kremnica defended
the daims of Queen Elizabeth, EmperorSigismund’s
daughter and of her son and the Emperor’s
posthumous child Ladislav.45 About the middle
of the 15th Century we can observe some marks of
decrease of économie prosperity of the town.46
It was still in the period of local wars instigated
by the émigré Hussite Commander Jiskra of