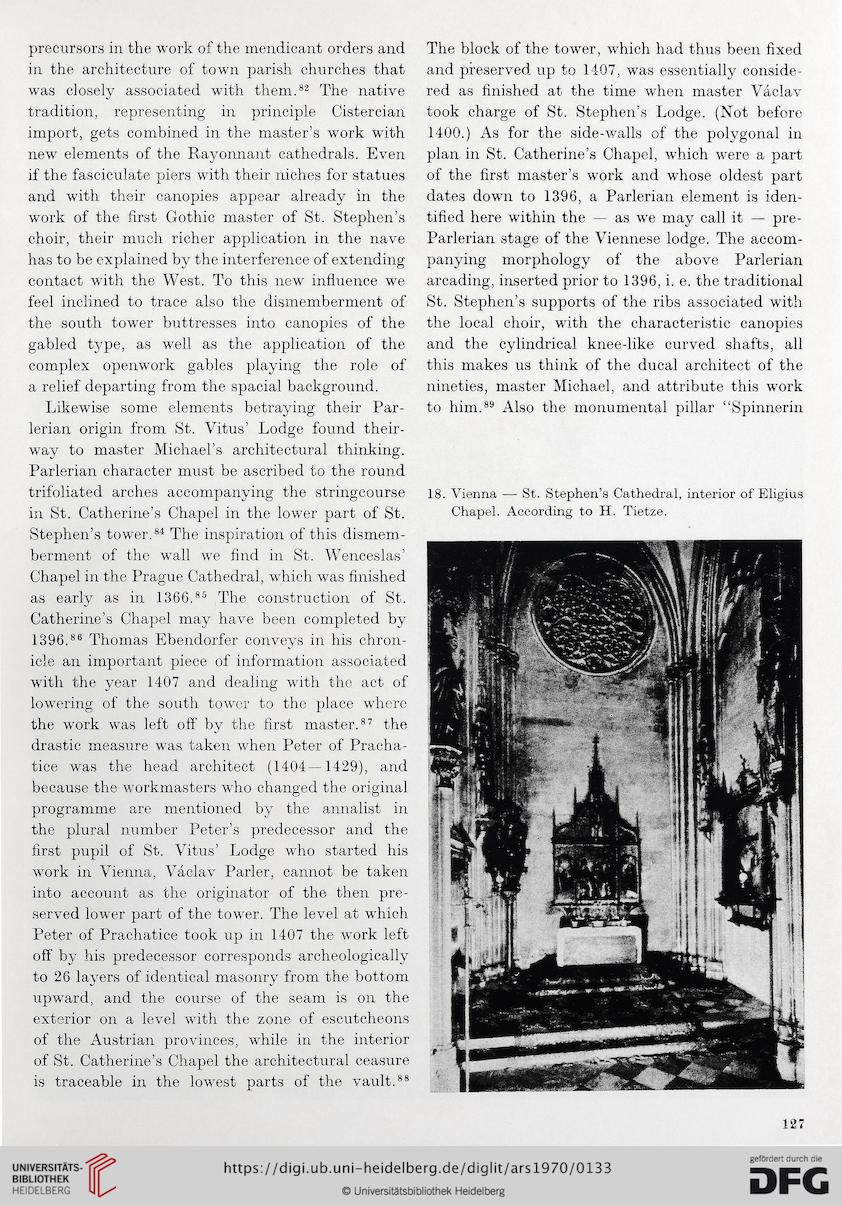 Hinweise zum OCR-Text
precursors in the work of the mendicant orders and
in the architecture of town parish churches that
was dosely associated with them.82 The native
tradition, representing in principle Cistercian
import, gets combined in the master’s work with
new éléments of the Rayonnant cathedrals. Even
if the fasciculate piers with their niches for statues
and with their canopies appear already in the
work of the Hrst Gothic master of St. Stephen’s
choir, their much richer application in the navě
has to be explained by the interference of extending
contact with the West. To this new influence we
feel inclined to trace also the dismemberment of
the south tower buttresses into canopies of the
gabled type, as well as the application of the
complex openwork gables playing the role of
a relief departing from the spacial background.
Likewise some elements betraying their Par-
lerian origin from St. Vitus’ Lodge found their -
way to master Michael’s architectural thinking.
Parlerian character must be ascribed to the round
trifoliated arches accompanying the stringcourse
in St. Catherine’s Chapel in the lower part of St.
Stephen’s tower.84 The inspiration of this dismem-
berment of the wall we find in St. Wenceslas’
Chapel in the Prague Cathédral, which was finished
as early as in 1366.85 The construction of St.
Catherine’s Chapel may have been completed by
1396.86 Thomas Ebendorfer conveys in his chron-
icle an important piece of information associated
with the year 1407 and dealing with the act of
lowering of the south tower to the place whcro
the work was left off by the first master.87 the
drastic measure was taken when Peter of Pracha-
tice was the head architect (1404—1429), and
because the workmasters who changed the original
programme are mentioned by the annalist in
the plural number Peter’s predecessor and the
first pupil of St. Vitus’ Lodge who started his
work in Vienna, Václav Parler, cannot be taken
into account as the originator of the then pre-
served lower part of the tower. The level at which
Peter of Prachatice took up in 1407 the work left
off by his predecessor corresponds archeologically
to 26 layers of identical masonry from the bottom
upward, and the course of the seam is on the
exterior on a level with the zone of escutcheons
of the Austrian provinces, while in the inferior
of St. Catherine’s Chapel the architectural ceasure
is traceable in the lowest parts of the vault.88

The block of the tower, which had thus been fixed
and přeserved up to 1407, was essentially conside-
red as finished at the time when master Václav
took charge of St. Stephen’s Lodge. (Not before
1400.) As for the side-walls of the polygonal in
plan in St. Catherine’s Chapel, which were a part
of the first master’s work and whose oldest part
dates down to 1396, a Parlerian element is iden-
tified here within the — as we may call it — pre-
Parlerian stage of the Viennese lodge. The accom-
panying morphology of the above Parlerian
arcading, inserted prior to 1396, i. e. the traditional
St. Stephen’s supports of the ribs associated with
the local choir, with the characteristic canopies
and the cylindrical knee-like curved shafts, all
this makes us think of the ducal architect of the
nineties, master Michael, and attribute this work
to him.89 Also the monumental pillar “Spinnerin