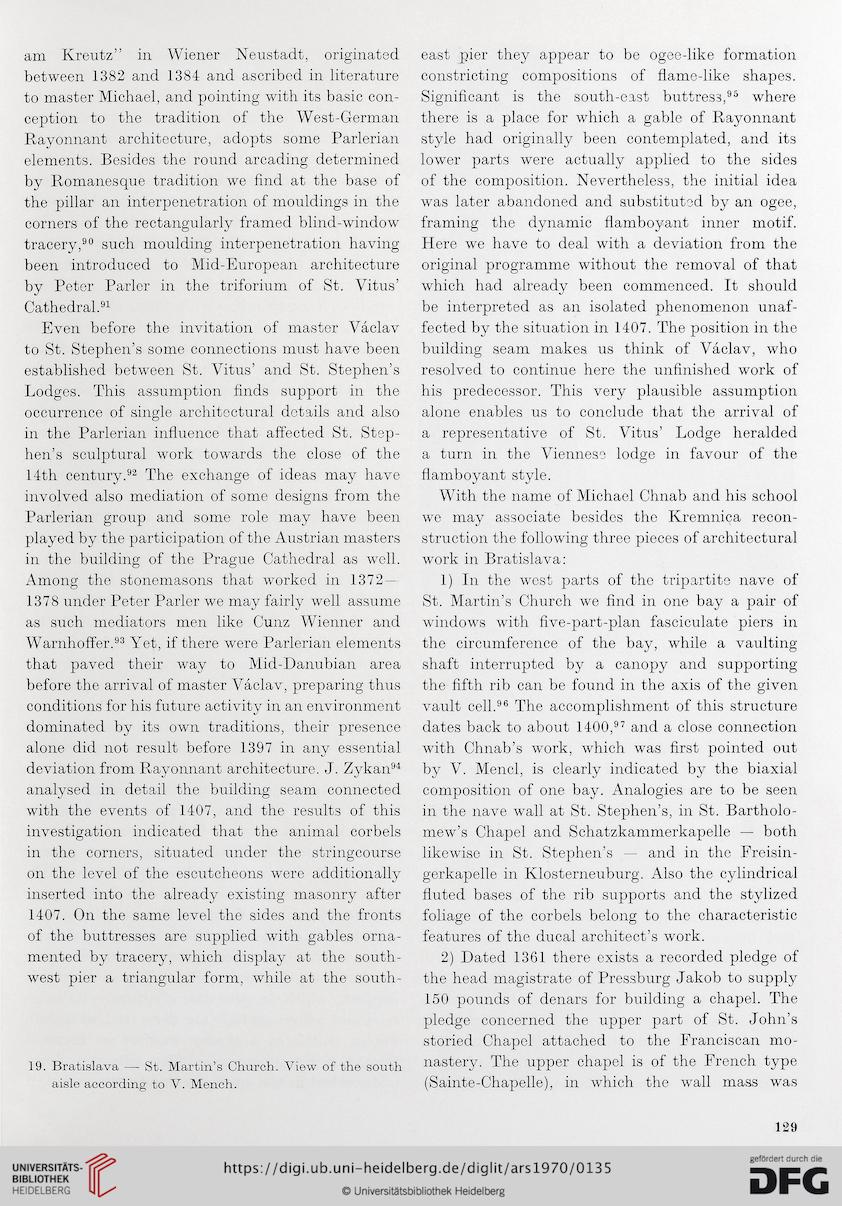 Information about OCR text
am Kreutz” in Wiener Neustadt, originated
between 1382 and 1384 and ascribcd in literatuře
to master Michael, and pointing with its basic con-
ception to the tradition of the West-German
Rayonnant architecture, adopts some Parlerian
éléments. Besides the round arcading determined
by Romanesque tradition we find at the base of
the pillar an interpénétration of mouldings in the
corners of the rectangularly framed blind-window
tracery,90 such moulding interpénétration having
been introduced to Mid-European architecture
by Peter Parier in the triforium of St. Vitus’
Cathedra!.91
Even before the invitation of master Václav
to St. Stephen’s some connections must have been
established between St. Vitus’ and St. Stephen’s
Lodgcs. This assumption finds support in the
occurrence of single architectural details and also
in the Parlerian influence that affected St. Step-
hen’s sculptural work towards the close of the
14th Century.92 The exchange of ideas may have
involved also médiation of some designs from the
Parlerian group and some role may have been
played by the participation of the Austrian masters
in the building of the Prague Cathédral as well.
Among the stonemasons that workcd in 1372 —
1378 under Peter Parier we may fairly well assume
as such mediators men like Cunz Wienner and
Warnhoffer.93 Yet, if there were Parlerian elements
that pavěd their way to Mid-Danubian area
before the arrivai of master Vaclav, preparing thus
conditions for his future activity in an environment
dominated by its own traditions, their presence
alone did not result before 1397 in any essential
déviation from Rayonnant architecture. J. Zykan94
analysed in detail the building seam connected
with the events of 1407, and the results of this
investigation indicated that the animal corbels
in the corners, situated under the stringcourse
on the level of the escutcheons were additionally
inserted into the already existing masonry after
1407. On the same level the sides and the fronts
of the buttresses are supplied with gables orna-
mented by tracery, which display at the South-
west pier a triangular form, while at the south-

19. Bratislava — St. Martin’s Church. View of the south
aisle according to V. Mench.

east pier they appear to be ogeo-like formation
constricting compositions of flamc-like shapes.
Significant is the south-east buttress,95 where
there is a place for which a gable of Rayonnant
style had originally been contemplated, and its
lower parts were actually applied to the sides
of the composition. Nevertheless, the initial idea
was later abandoned and substituted by an ogee,
framing the dynamic flamboyant inner motif.
Here we have to deal with a déviation from the
original programme without the removal of that
which had already been commenced. It should
be interpreted as an isolated phenomenon unaf-
fected by the situation in 1407. The position in the
building seam makes us think of Václav, who
resolved to continue here the unfinished work of
his predecessor. This very plausible assumption
alone enables us to conclude that the arrivai of
a représentative of St. Vitus’ Lodge heralded
a turn in the Viennese lodge in favour of the
flamboyant style.
With the name of Michael Chnab and his school
we may associate besides the Kremnica recon-
struction the following three pièces of architectural
work in Bratislava:
1) In the west parts of the tripartite nave of
St. Martin’s Church we find in one bay a pair of
Windows with five-part-plan fasciculate piers in
the circumference of the bay, while a vaulting
shaft interrupted by a canopy and supporting
the fifth rib can be found in the axis of the given
vault cell.96 The accomplishment of this structure
dates back to about 1400,97 and a close connection
with Chnab’s work, which was first pointed out
by V. Mencl, is clearly indicated by the biaxial
composition of one bay. Analogies are to be seen
in the nave wall at St. Stephen’s, in St. Bartholo-
mew’s Chapel and Schatzkammerkapelle — both
likewise in St. Stephen’s — and in the Freisin-
gerkapelle in Klosterneuburg. Also the cylindrical
fluted bases of the rib supports and the stylized
foliage of the corbels belong to the characteristic
features of the ducal architect’s work.
2) Dated 1361 there exists a recorded pledge of
the head magistráte of Pressburg Jakob to supply
150 pounds of denars for building a chapel. The
pledge concerned the upper part of St. John’s
storied Chapel attached to the Franciscan mo-
nastery. The upper chapel is of the French type
(Sainte-Chapelle), in which the wall mass was