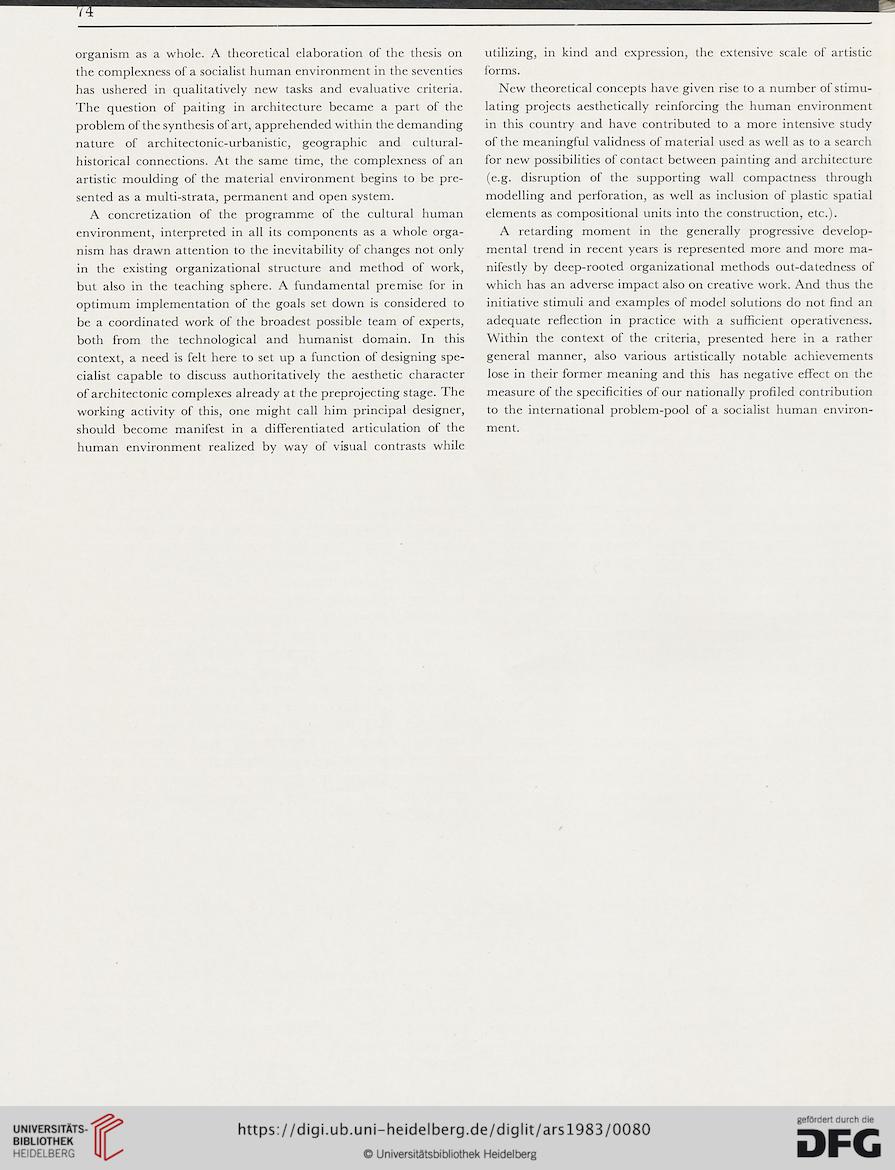 Information about OCR text
organisai as a whole. A theoretical élaboration of the thesis on
the complexness of a socialist human environment in the seventies
has ushered in qualitatively new tasks and évaluative criteria.
The question of paiting in architecture became a part of the
problém of the synthesis of art, apprehended within the demanding
nature of architectonic-urbanistic, géographie and cultural-
historical connections. At the same time, the complexness of an
artistic moulding of the material environment begins to be pre-
sented as a multi-strata, permanent and open systém.
A concretization of the programme of the cultural human
environment, interpreted in ail its components as a whole orga-
nisai has drawn attention to the inevitability of changes not only
in the existing organizational structure and method of work,
but also in the teaching sphere. A fundamental premise for in
optimum implémentation of the goals set down is considered to
be a coordinated work of the broadest possible team of experts,
both from the technological and humanist domain. In this
context, a need is felt here to set up a function of designing spe-
cialist capable to discuss authoritatively the aesthetic character
of architectonie complexes already at the preprojecting stage. The
working activity of this, one might call him principal designer,
should become manifest in a differentiated articulation of the
human environment realized by way of visual contrasts while

utilizing, in kind and expression, the extensive scale of artistic
forms.
New theoretical concepts hâve given rise to a number of stimu-
lating projects aesthetically reinforcing the human environment
in this country and hâve contributed to a more intensive study
of the meaningful validness of material used as well as to a search
for new possibilities of contact between painting and architecture
(e.g. disruption of the supporting wall compactness through
modelling and perforation, as well as inclusion of plastic spatial
éléments as compositional units into the construction, etc.).
A retarding moment in the generally progressive develop-
mental trend in recent years is represented more and more ma-
nifestly by deep-rooted organizational methods out-datedness of
which has an adverse impact also on créative work. And thus the
initiative Stimuli and examples of model solutions do not find an
adéquate reflection in practice with a sufficient operativeness.
Within the context of the criteria, presented here in a rather
general männer, also various artistically notable achievements
lose in their former meaning and this has negative effect on the
measure of the specificities of our nationally profiled contribution
to the international problem-pool of a socialist human environ-
ment.