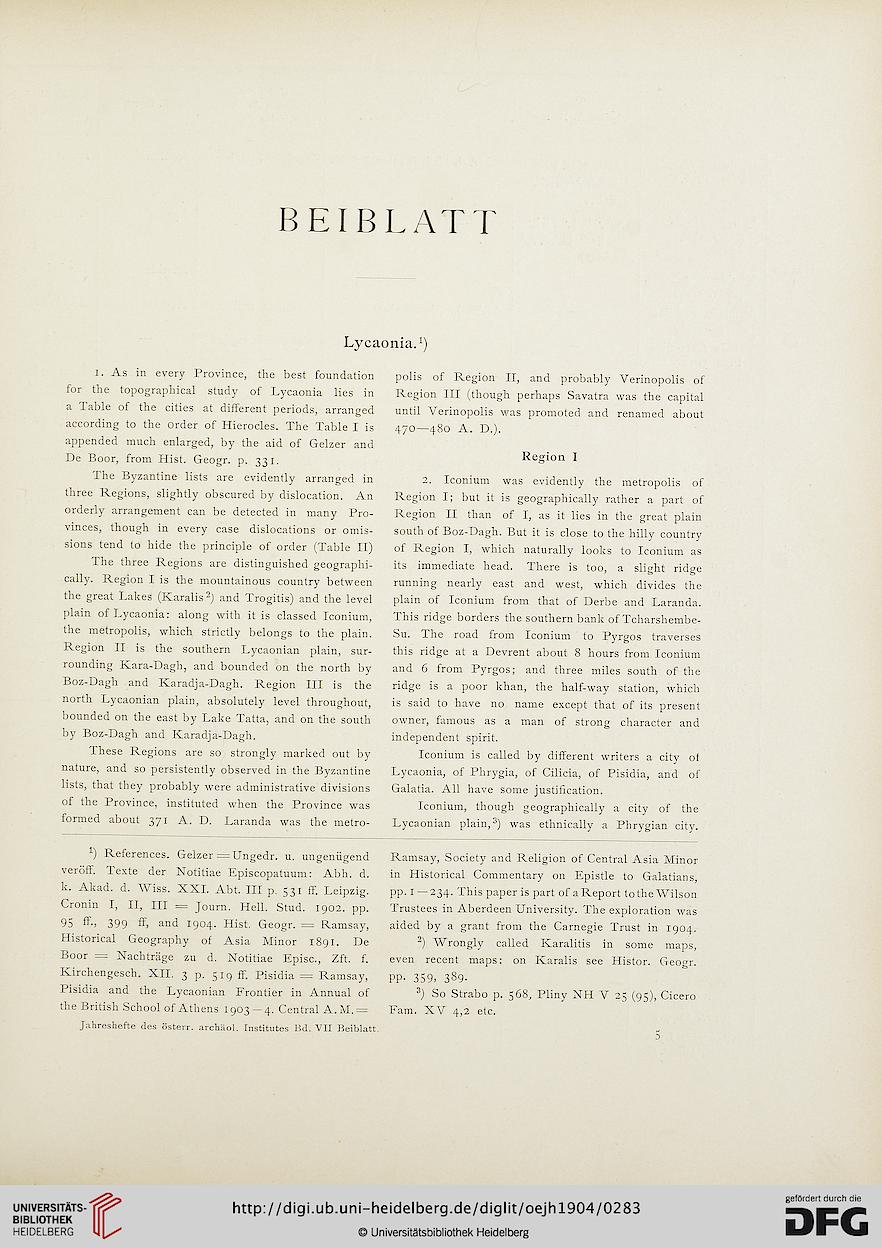 I. As in every Province, the best foundation
for the topographical study of Lycaonia lies in
a Table of the cities at different periods, arranged
according to the Order of Hierocles. The Table I is
appended much enlarged, by the aid of Gelzer and
De Boor, from Hist. Geogr. p. 331.

The Byzantine lists are evidently arranged in
three Regions, slightly obscured by dislocation. An
orderly arrangement can be detected in many Pro-
vinces, though in every case dislocations or omis-
sions tend to hide the principle of order (Table II)

The three Regions are distinguished geographi-
cally. Region I is the mountainous country between
the great Lakes (KLaralis 2) and Trogitis) and the level
plain of Lycaonia: along with it is classed Iconium,
the metropolis, which strictly belongs to the plain.
Region II is the southern Lycaonian plain, sur-
rounding Kara-Dagh, and bounded on the north by
Boz-Dagh and Karadja-Dagh. Region III is the
north Lycaonian plain, absolutely level throughout,
bounded on the east by Lake Tatta, and on the south
by Boz-Dagh and Karadja-Dagh.

These Regions are so strongly marked out by
nature, and so persistently observed in the Byzantine
lists, that they probably were administrative divisions
of the Province, instituted when the Province was
formed about 371 A. D. Laranda was the metro-

polis of Region II, and probably Yerinopolis of
Region III (though perhaps Savatra was the capital
until Verinopolis was promoted and renamed about
470—480 A. D.).

2. Iconium was evidently the metropolis of
Region I; but it is geographically rather a part of
Region II than of I, as it lies in the great plain
south of Boz-Dagh. But it is close to the hilly country
of Region I, which naturally looks to Iconium as
its immediate head. There is too, a slight ridge
running nearly east and west, which divides the
plain of Iconium from that of Derbe and Laranda.
This ridge borders the southern bank of Tcharshembe-
Su. The road from Iconium to Pyrgos traverses
this ridge at a Devrent about 8 hours from Iconium
and 6 from Pyrgos; and three miles south of the
ridge is a poor khan, the half-way station, which
is said to have no name except that of its present
owner, famous as a man of strong character and
independent spirit.

Iconium is called by different writers a city of
Lycaonia, of Phrygia, of Cilicia, of Pisidia, and of
Galatia. All have some justification.

Iconium, though geographicaliy a city of the
Lycaonian plain, 3) was ethnically a Pbrygian city.

Ramsay, Society and Religion of Central Asia Minor
in Historical Commentary on Epistle to Galatians,
pp. I —234. This paper is part of aReport totheWilson
Trustees in Aberdeen University. The exploration was
aided by a grant from the Carnegie Trust in 1904.