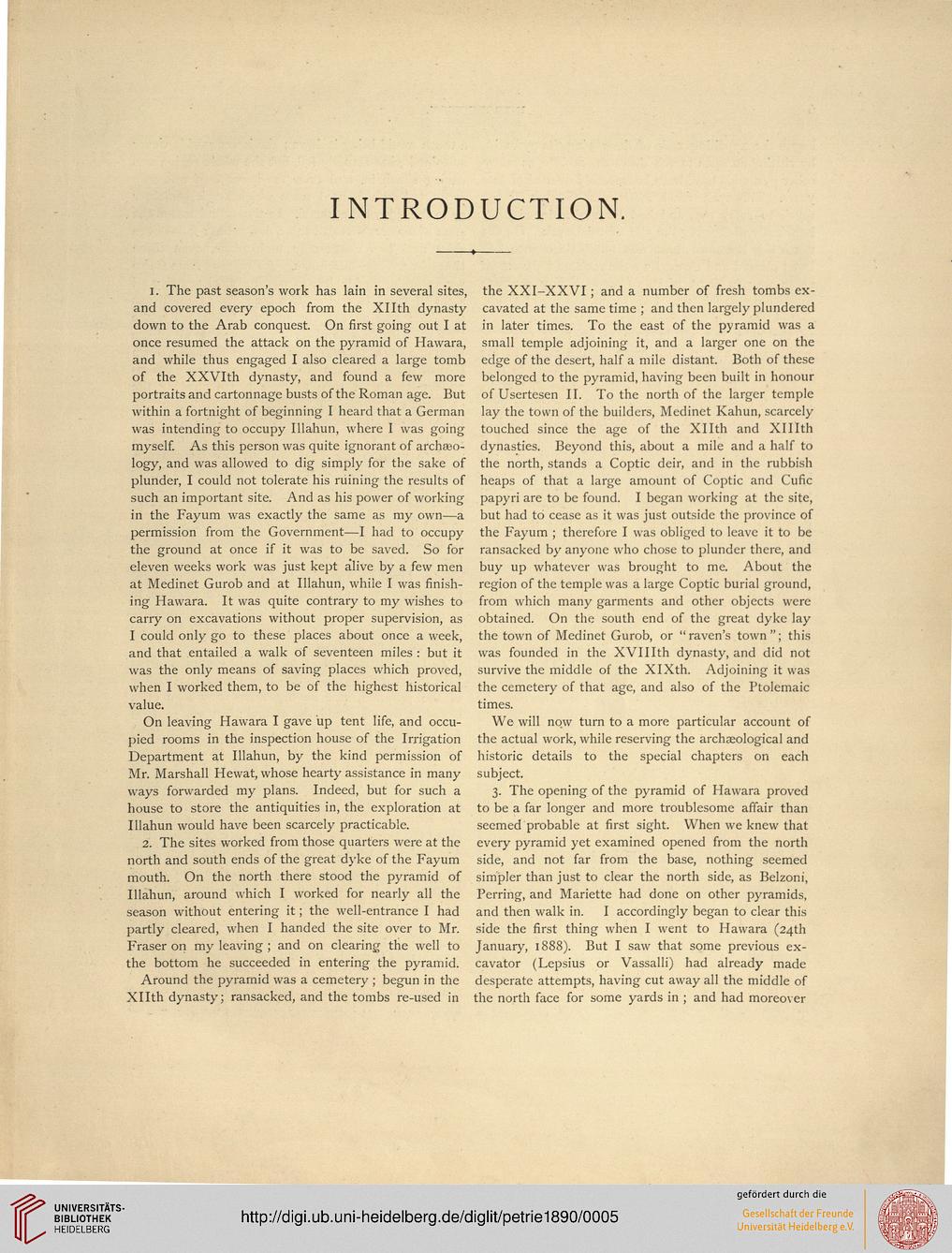 I. The past season's work has lain in several sites,
and covered every epoch from the Xllth dynasty
down to the Arab conquest. On first going out I at
once resumed the attack on the pyramid of Hawara,
and while thus engaged I also cleared a large tomb
of the XXVIth dynasty, and found a few more
portraits and cartonnage busts of the Roman age. But
within a fortnight of beginning I heard that a German
was intending to occupy Illahun, where I was going
myself. As this person was quite ignorant of archeo-
logy, and was allowed to dig simply for the sake of
plunder, I could not tolerate his ruining the results of
such an important site. And as his power of working
in the Fayum was exactly the same as my own—a
permission from the Government—I had to occupy
the ground at once if it was to be saved. So for
eleven weeks work was just kept alive by a few men
at Medinet Gurob and at Illahun, while I was finish-
ing Hawara. It was quite contrary to my wishes to
carry on excavations without proper supervision, as
I could only go to these places about once a week,
and that entailed a walk of seventeen miles : but it
was the only means of saving places which proved,
when I worked them, to be of the highest historical
value.

On leaving Hawara I gave up tent life, and occu-
pied rooms in the inspection house of the Irrigation
Department at Illahun, by the kind permission of
Mr. Marshall Hewat, whose hearty assistance in many
ways forwarded my plans. Indeed, but for such a
house to store the antiquities in, the exploration at
Illahun would have been scarcely practicable.

2. The sites worked from those quarters were at the
north and south ends of the great dyke of the Fayum
mouth. On the north there stood the pyramid of
Illahun, around which I worked for nearly all the
season without entering it; the well-entrance I had
partly cleared, when I handed the site over to Mr.
Fraser on my leaving ; and on clearing the well to
the bottom he succeeded in entering the pyramid.

Around the pyramid was a cemetery ; begun in the
Xllth dynasty; ransacked, and the tombs re-used in

the XXI-XXVI; and a number of fresh tombs ex-
cavated at the same time ; and then largely plundered
in later times. To the east of the pyramid was a
small temple adjoining it, and a larger one on the
edge of the desert, half a mile distant. Both of these
belonged to the pyramid, having been built in honour
of Usertesen II. To the north of the larger temple
lay the town of the builders, Medinet Kahun, scarcely
touched since the age of the Xllth and XHIth
dynasties. Beyond this, about a mile and a half to
the north, stands a Coptic deir, and in the rubbish
heaps of that a large amount of Coptic and Cufic
papyri are to be found. I began working at the site,
but had to cease as it was just outside the province of
the Fayum ; therefore I was obliged to leave it to be
ransacked by anyone who chose to plunder there, and
buy up whatever was brought to me. About the
region of the temple was a large Coptic burial ground,
from which many garments and other objects were
obtained. On the south end of the great dyke lay
the town of Medinet Gurob, or " raven's town "; this
was founded in the XVIIIth dynasty, and did not
survive the middle of the XlXth. Adjoining it was
the cemetery of that age, and also of the Ptolemaic
times.

We will now turn to a more particular account of
the actual work, while reserving the archaeological and
historic details to the special chapters on each
subject.

3. The opening of the pyramid of Hawara proved
to be a far longer and more troublesome affair than
seemed probable at first sight. When we knew that
every pyramid yet examined opened from the north
side, and not far from the base, nothing seemed
simpler than just to clear the north side, as Belzoni,
Perring, and Mariette had done on other pyramids,
and then walk in. I accordingly began to clear this
side the first thing when I went to Hawara (24th
January, 1888). But I saw that some previous ex-
cavator (Lepsius or Vassalli) had already made
desperate attempts, having cut away all the middle of
the north face for some yards in ; and had moreover