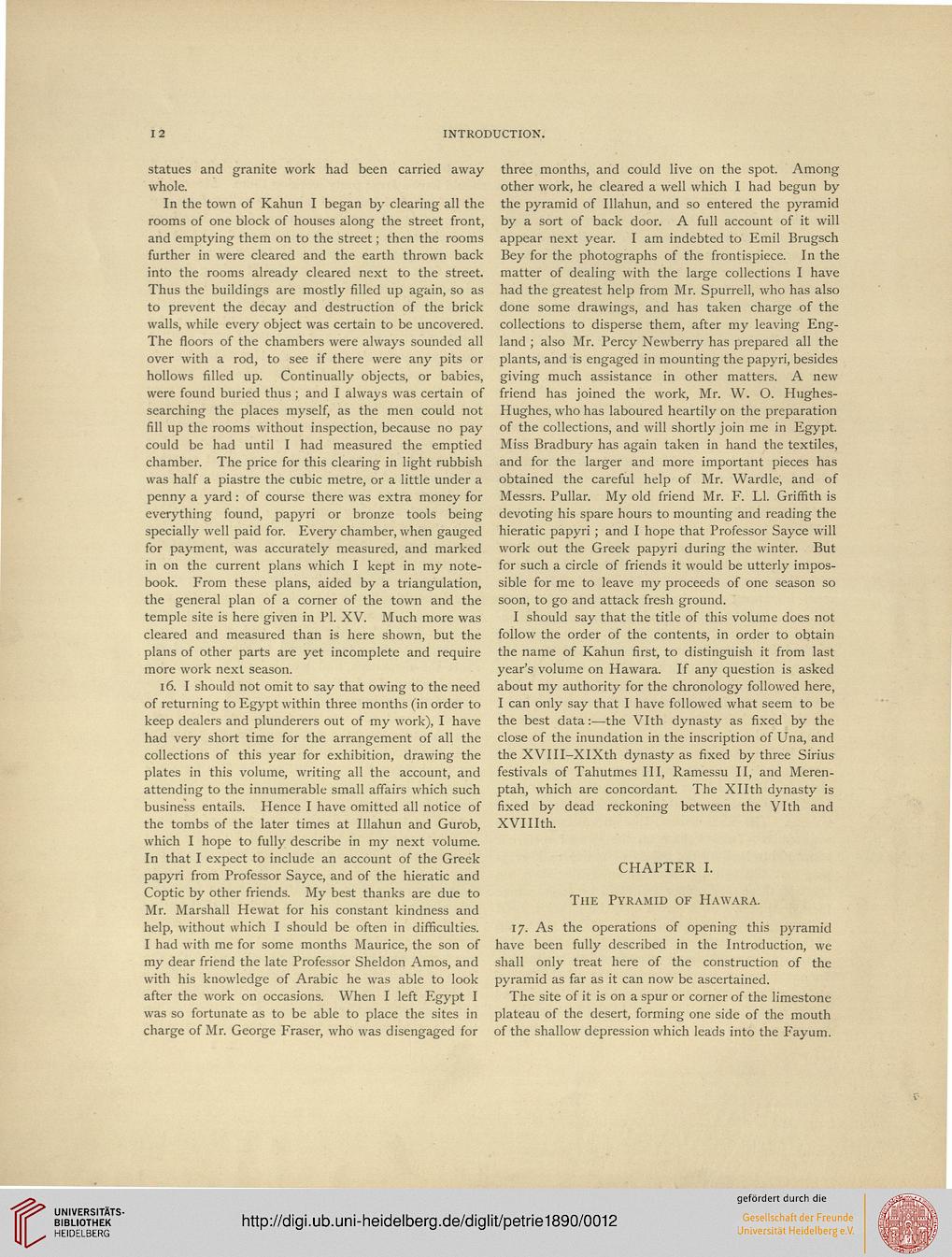 statues and granite work had been carried away
whole.

In the town of Kahun I began by clearing all the
rooms of one block of houses along the street front,
and emptying them on to the street; then the rooms
further in were cleared and the earth thrown back
into the rooms already cleared next to the street.
Thus the buildings are mostly filled up again, so as
to prevent the decay and destruction of the brick
walls, while every object was certain to be uncovered.
The floors of the chambers were always sounded all
over with a rod, to see if there were any pits or
hollows filled up. Continually objects, or babies,
were found buried thus ; and I always was certain of
searching the places myself, as the men could not
fill up the rooms without inspection, because no pay
could be had until I had measured the emptied
chamber. The price for this clearing in light rubbish
was half a piastre the cubic metre, or a little under a
penny a yard: of course there was extra money for
everything found, papyri or bronze tools being
specially well paid for. Every chamber, when gauged
for payment, was accurately measured, and marked
in on the current plans which I kept in my note-
book. From these plans, aided by a triangulation,
the general plan of a corner of the town and the
temple site is here given in PI. XV. Much more was
cleared and measured than is here shown, but the
plans of other parts are yet incomplete and require
more work next season.

16. I should not omit to say that owing to the need
of returning to Egypt within three months (in order to
keep dealers and plunderers out of my work), I have
had very short time for the arrangement of all the
collections of this year for exhibition, drawing the
plates in this volume, writing all the account, and
attending to the innumerable small affairs which such
business entails. Hence I have omitted all notice of
the tombs of the later times at Illahun and Gurob,
which I hope to fully describe in my next volume.
In that I expect to include an account of the Greek
papyri from Professor Sayce, and of the hieratic and
Coptic by other friends. My best thanks are due to
Mr. Marshall Hewat for his constant kindness and
help, without which I should be often in difficulties.
I had with me for some months Maurice, the son of
my dear friend the late Professor Sheldon Amos, and
with his knowledge of Arabic he was able to look
after the work on occasions. When I left Egypt I
was so fortunate as to be able to place the sites in
charge of Mr. George Fraser, who was disengaged for

three months, and could live on the spot. Among
other work, he cleared a well which I had begun by
the pyramid of Illahun, and so entered the pyramid
by a sort of back door. A full account of it will
appear next year. I am indebted to Emil Brugsch
Bey for the photographs of the frontispiece. In the
matter of dealing with the large collections I have
had the greatest help from Mr. Spurrell, who has also
done some drawings, and has taken charge of the
collections to disperse them, after my leaving Eng-
land ; also Mr. Percy Newberry has prepared all the
plants, and is engaged in mounting the papyri, besides
giving much assistance in other matters. A new
friend has joined the work, Mr. W. O. Hughes-
Hughes, who has laboured heartily on the preparation
of the collections, and will shortly join me in Egypt.
Miss Bradbury has again taken in hand the textiles,
and for the larger and more important pieces has
obtained the careful help of Mr. Wardle, and of
Messrs. Pullar. My old friend Mr. F. LI. Griffith is
devoting his spare hours to mounting and reading the
hieratic papyri ; and I hope that Professor Sayce will
work out the Greek papyri during the winter. But
for such a circle of friends it would be utterly impos-
sible for me to leave my proceeds of one season so
soon, to go and attack fresh ground.

I should say that the title of this volume does not
follow the order of the contents, in order to obtain
the name of Kahun first, to distinguish it from last
year's volume on Hawara. If any question is asked
about my authority for the chronology followed here,
I can only say that I have followed what seem to be
the best data:—the Vlth dynasty as fixed by the
close of the inundation in the inscription of Una, and
the XVIII-XIXth dynasty as fixed by three Sirius
festivals of Tahutmes III, Ramessu II, and Meren-
ptah, which are concordant. The Xllth dynasty is
fixed by dead reckoning between the Vlth and
XVIIIth.

The Pyramid of Hawara.

17. As the operations of opening this pyramid
have been fully described in the Introduction, we
shall only treat here of the construction of the
pyramid as far as it can now be ascertained.

The site of it is on a spur or corner of the limestone
plateau of the desert, forming one side of the mouth
of the shallow depression which leads into the Fayum.