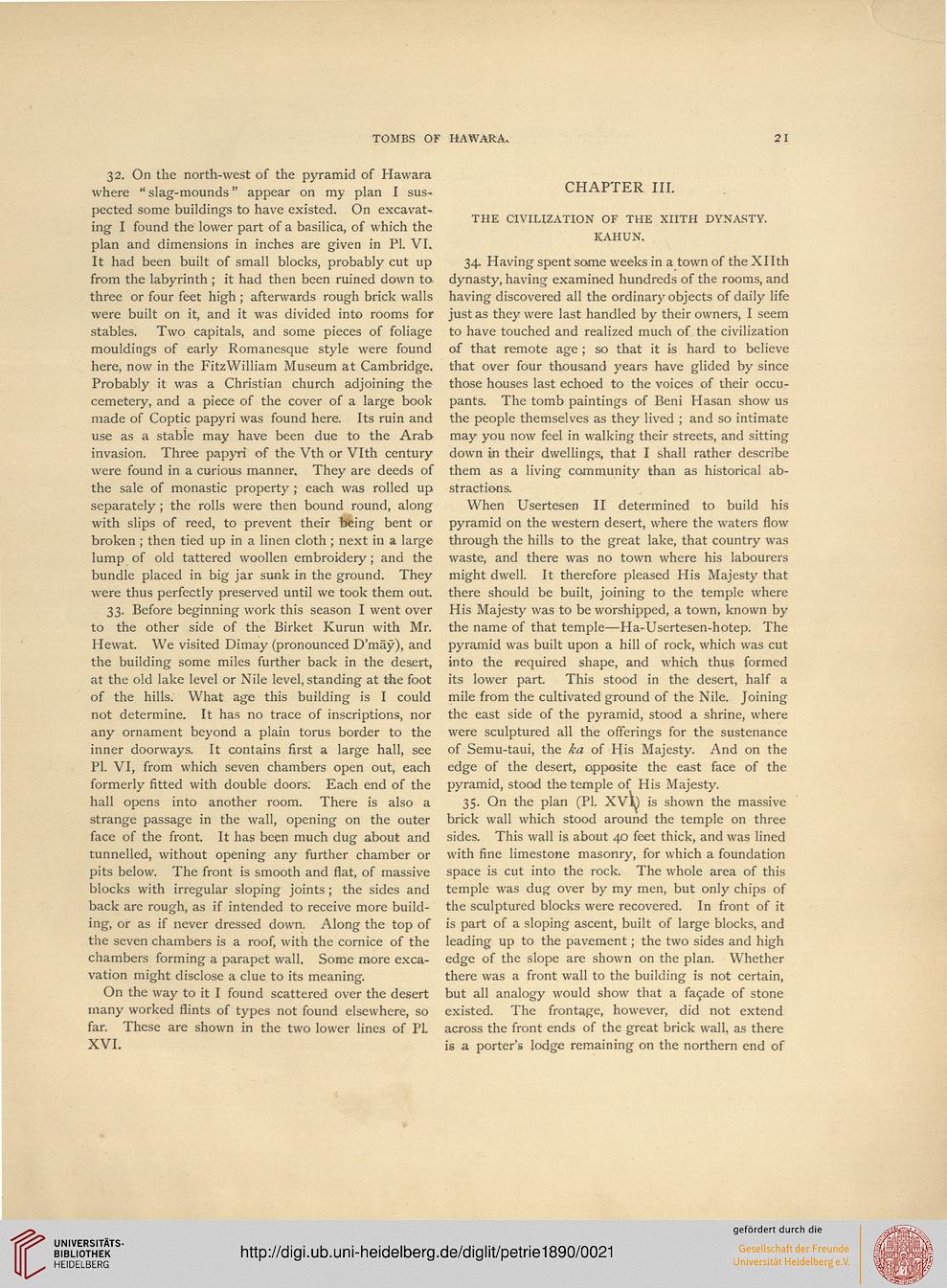 32. On the north-west of the pyramid of Hawara
where "slag-mounds" appear on my plan I sus-
pected some buildings to have existed. On excavat-
ing I found the lower part of a basilica, of which the
plan and dimensions in inches are given in PI. VL
It had been built of small blocks, probably cut up
from the labyrinth ; it had then been ruined down to.
three or four feet high ; afterwards rough brick walls
were built on it, and it was divided into rooms for
stables. Two capitals, and some pieces of foliage
mouldings of early Romanesque style were found
here, now in the FitzWilliam Museum at Cambridge.
Probably it was a Christian church adjoining the
cemetery, and a piece of the cover of a large book
made of Coptic papyri was found here. Its ruin and
use as a stable may have been due to the Arab
invasion. Three papyri of the Vth or Vlth century
were found in a curious manner. They are deeds of
the sale of monastic property j each was rolled up
separately; the rolls were then bound round, along
with slips of reed, to prevent their being bent or
broken ; then tied up in a linen cloth ; next in a large
lump of old tattered woollen embroidery; and the
bundle placed in big jar sunk in the ground. They
were thus perfectly preserved until we took them out.

33. Before beginning work this season I went over
to the other side of the Birket Kurun with Mr.
Hewat. We visited Dimay (pronounced D'may), and
the building some miles further back in the desert,
at the old lake level or Nile level, standing at the foot
of the hills. What age this building is I could
not determine. It has no trace of inscriptions, nor
any ornament beyond a plain torus border to the
inner doorways. It contains first a large hall, see
PI. VI, from which seven chambers open out, each
formerly fitted with double doors. Each end of the
hall opens into another room. There is also a
strange passage in the wall, opening on the outer
face of the front. It has been much dug about and
tunnelled, without opening any further chamber or
pits below. The front is smooth and flat, of massive
blocks with irregular sloping joints ; the sides and
back are rough, as if intended to receive more build-
ing, or as if never dressed down. Along the top of
the seven chambers is a roof, with the cornice of the
chambers forming a parapet wall. Some more exca-
vation might disclose a clue to its meaning.

On the way to it I found scattered over the desert
many worked flints of types not found elsewhere, so
far. These are shown in the two lower lines of PL
XVI.

THE CIVILIZATION OF THE XIITH DYNASTY.
KAHUN.

34. Having spent some weeks in a town of the Xllth
dynasty, having examined hundreds of the rooms, and
having discovered all the ordinary objects of daily life
just as they were last handled by their owners, I seem
to have touched and realized much of the civilization
of that remote age ; so that it is hard to believe
that over four thousand years have glided by since
those houses last echoed to the voices of their occu-
pants. The tomb paintings of Beni Hasan show us
the people themselves as they lived ; and so intimate
may you now feel in walking their streets, and sitting
down in their dwellings, that I shall rather describe
them as a living community than as historical ab-
stractions.

When Usertesen II determined to build his
pyramid on the western desert, where the waters flow
through the hills to the great lake, that country was
waste, and there was no town where his labourers
might dwell. It therefore pleased His Majesty that
there should be built, joining to the temple where
His Majesty was to be worshipped, a town, known by
the name of that temple—Ha-Usertesen-hotep. The
pyramid was built upon a hill of rock, which was cut
into the required shape, and which thus formed
its lower part. This stood in the desert, half a
mile from the cultivated ground of the Nile. Joining
the east side of the pyramid, stood a shrine, where
were sculptured all the offerings for the sustenance
of Semu-taui, the ka of His Majesty. And on the
edge of the desert, apposite the east face of the
pyramid, stood the temple of His Majesty.

35. Qn the plan (PI. XVa) is shown the massive
brick wall which stood around the temple on three
sides. This wall is about 40 feet thick, and was lined
with fine limestone masonry, for which a foundation
space is cut into the rock. The whole area of this
temple was dug over by my men, but only chips of
the sculptured blocks were recovered. In front of it
is part of a sloping ascent, built of large blocks, and
leading up to the pavement; the two sides and high
edge of the slope are shown on the plan. Whether
there was a front wall to the building is not certain,
but all analogy would show that a facade of stone
existed. The frontage, however, did not extend
across the front ends of the great brick wall, as there
is a porter's lodge remaining on the northern end of