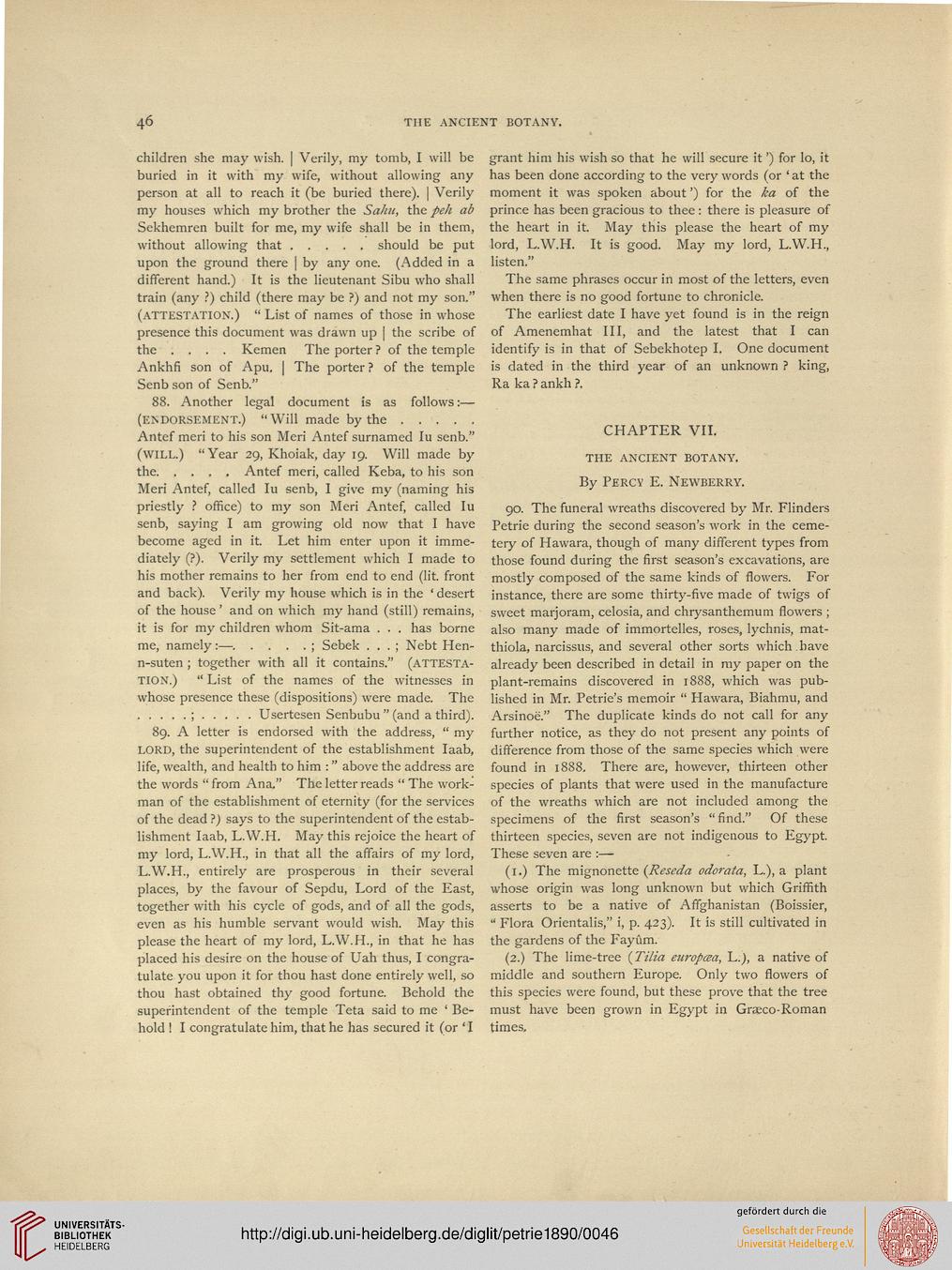 children she may wish. | Verily, my tomb, I will be
buried in it with my wife, without allowing any
person at all to reach it (be buried there). | Verily
my houses which my brother the Sahu, the peh ab
Sekhemren built for me, my wife shall be in them,

without allowing that.....should be put

upon the ground there | by any one. (Added in a
different hand.) It is the lieutenant Sibu who shall
train (any ?) child (there may be ?) and not my son."
(ATTESTATION.) " List of names of those in whose
presence this document was drawn up | the scribe of
the .... Kemen The porter ? of the temple
Ankhfi son of Apu. | The porter? of the temple
Senb son of Senb."

88. Another legal document is as follows:—

Meri Antef, called Iu senb, I give my (naming his
priestly ? office) to my son Meri Antef, called Iu
senb, saying I am growing old now that I have
become aged in it. Let him enter upon it imme-
diately (?). Verily my settlement which I made to
his mother remains to her from end to end (lit. front
and back). Verily my house which is in the ' desert
of the house' and on which my hand (still) remains,
it is for my children whom Sit-ama . . . has borne
me, namely:—. . . . . ; Sebek . . . ; Nebt Hen-
n-suten ; together with all it contains." (ATTESTA-
TION.) " List of the names of the witnesses in
whose presence these (dispositions) were made. The
.....;.....Usertesen Senbubu " (and a third).

89. A letter is endorsed with the address, " my
LORD, the superintendent of the establishment Iaab,
life, wealth, and health to him :" above the address are
the words " from Ana." The letter reads " The work-
man of the establishment of eternity (for the services
of the dead ?) says to the superintendent of the estab-
lishment Iaab, L.W.H. May this rejoice the heart of
my lord, L.W.H., in that all the affairs of my lord,
L.W.H., entirely are prosperous in their several
places, by the favour of Sepdu, Lord of the East,
together with his cycle of gods, and of all the gods,
even as his humble servant would wish. May this
please the heart of my lord, L.W.H., in that he has
placed his desire on the house of Uah thus, I congra-
tulate you upon it for thou hast done entirely well, so
thou hast obtained thy good fortune. Behold the
superintendent of the temple Teta said to me ' Be-
hold ! I congratulate him, that he has secured it (or ' I

grant him his wish so that he will secure it') for lo, it
has been done according to the very words (or ' at the
moment it was spoken about') for the ka of the
prince has been gracious to thee : there is pleasure of
the heart in it. May this please the heart of my
lord, L.W.H. It is good. May my lord, L.W.H.,
listen."

The same phrases occur in most of the letters, even
when there is no good fortune to chronicle.

The earliest date I have yet found is in the reign
of Amenemhat III, and the latest that I can
identify is in that of Sebekhotep I. One document
is dated in the third year of an unknown ? king,
Ra ka ? ankh ?.

90. The funeral wreaths discovered by Mr. Flinders
Petrie during the second season's work in the ceme-
tery of Hawara, though of many different types from
those found during the first season's excavations, are
mostly composed of the same kinds of flowers. For
instance, there are some thirty-five made of twigs of
sweet marjoram, celosia, and chrysanthemum flowers ;
also many made of immortelles, roses, lychnis, mat-
thiola, narcissus, and several other sorts which.have
already been described in detail in my paper on the
plant-remains discovered in 1888, which was pub-
lished in Mr. Petrie's memoir " Hawara, Biahmu, and
Arsinoe." The duplicate kinds do not call for any
further notice, as they do not present any points of
difference from those of the same species which were
found in 1888. There are, however, thirteen other
species of plants that were used in the manufacture
of the wreaths which are not included among the
specimens of the first season's "find." Of these
thirteen species, seven are not indigenous to Egypt.
These seven are :—

(1.) The mignonette {Reseda odorata, L), a plant
whose origin was long unknown but which Griffith
asserts to be a native of Afghanistan (Boissier,
" Flora Orientalis," i, p. 423). It is still cultivated in
the gardens of the Fayum.

(2.) The lime-tree {Tilia enropcea, L.), a native of
middle and southern Europe. Only two flowers of
this species were found, but these prove that the tree
must have been grown in Egypt in Graeco-Roman
times.