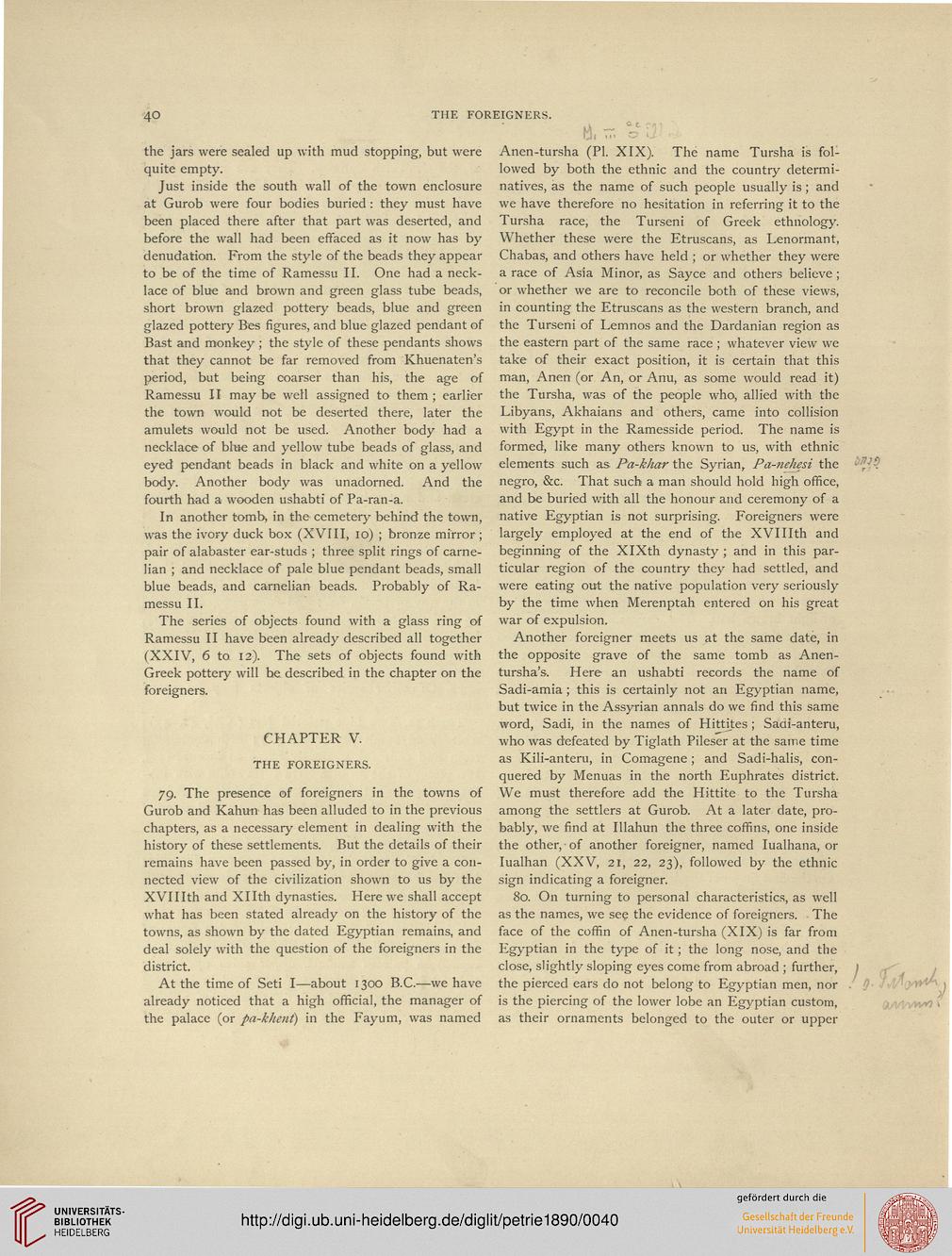 the jars were sealed up with mud stopping, but were
quite empty.

Just inside the south wall of the town enclosure
at Gurob were four bodies buried: they must have
been placed there after that part was deserted, and
before the wall had been effaced as it now has by
denudation. From the style of the beads they appear
to be of the time of Ramessu II. One had a neck-
lace of blue and brown and green glass tube beads,
short brown glazed pottery beads, blue and green
glazed pottery Bes figures, and blue glazed pendant of
Bast and monkey ; the style of these pendants shows
that they cannot be far removed from Khuenaten's
period, but being coarser than his, the age of
Ramessu II may be well assigned to them ; earlier
the town would not be deserted there, later the
amulets would not be used. Another body had a
necklace of blue and yellow tube beads of glass, and
eyed pendant beads in black and white on a yellow
body. Another body was unadorned. And the
fourth had a wooden ushabti of Pa-ran-a.

In another tomb, in the cemetery behind the town,
was the ivory duck box (XVIII, 10) ; bronze mirror;
pair of alabaster ear-studs ; three split rings of carne-
lian ; and necklace of pale blue pendant beads, small
blue beads, and carnelian beads. Probably of Ra-
messu II.

79. The presence of foreigners in the towns of
Gurob and Kahun has been alluded to in the previous
chapters, as a necessary element in dealing with the
history of these settlements. But the details of their
remains have been passed by, in order to give a con-
nected view of the civilization shown to us by the
XVIIIth and Xllth dynasties. Here we shall accept
what has been stated already on the history of the
towns, as shown by the dated Egyptian remains, and
deal solely with the question of the foreigners in the
district.

At the time of Seti I—about 1300 B.C.-—we have
already noticed that a high official, the manager of
the palace (or pa-khent) in the Fayum, was named

Anen-tursha (PI. XIX). The name Tursha is fol-
lowed by both the ethnic and the country determi-
natives, as the name of such people usually is; and
we have therefore no hesitation in referring it to the
Tursha race, the Turseni of Greek ethnology.
Whether these were the Etruscans, as Lenormant,
Chabas, and others have held ; or whether they were
a race of Asia Minor, as Sayce and others believe;
or whether we are to reconcile both of these views,
in counting the Etruscans as the western branch, and
the Turseni of Lemnos and the Dardanian region as
the eastern part of the same race ; whatever view we
take of their exact position, it is certain that this
man, Anen (or An, or Anu, as some would read it)
the Tursha, was of the people who, allied with the
Libyans, Akhaians and others, came into collision
with Egypt in the Ramesside period. The name is
formed, like many others known to us, with ethnic
elements such as Pa-khar the Syrian, Pa-7iehesi the
negro, &c. That such a man should hold high office,
and be buried with all the honour and ceremony of a
native Egyptian is not surprising. Foreigners were
largely employed at the end of the XVIIIth and
beginning of the XlXth dynasty ; and in this par-
ticular region of the country they had settled, and
were eating out the native population very seriously
by the time when Merenptah entered on his great
war of expulsion.

Another foreigner meets us at the same date, in
the opposite grave of the same tomb as Anen-
tursha's. Here an ushabti records the name of
Sadi-amia ; this is certainly not an Egyptian name,
but twice in the Assyrian annals do we find this same
word, Sadi, in the names of Hittites ; Sadi-anteru,
who was defeated by Tiglath Pileser at the same time
as Kili-anteru, in Comagene; and Sadi-halis, con-
quered by Menuas in the north Euphrates district.
We must therefore add the Hittite to the Tursha
among the settlers at Gurob. At a later date, pro-
bably, we find at Illahun the three coffins, one inside
the other, of another foreigner, named Iualhana, or
Iualhan (XXV, 21, 22, 23), followed by the ethnic
sign indicating a foreigner.

80. On turning to personal characteristics, as well
as the names, we see the evidence of foreigners. The
face of the coffin of Anen-tursha (XIX) is far from
Egyptian in the type of it; the long nose, and the
close, slightly sloping eyes come from abroad ; further,
the pierced ears do not belong to Egyptian men, nor
is the piercing of the lower lobe an Egyptian custom,
as their ornaments belonged to the outer or upper