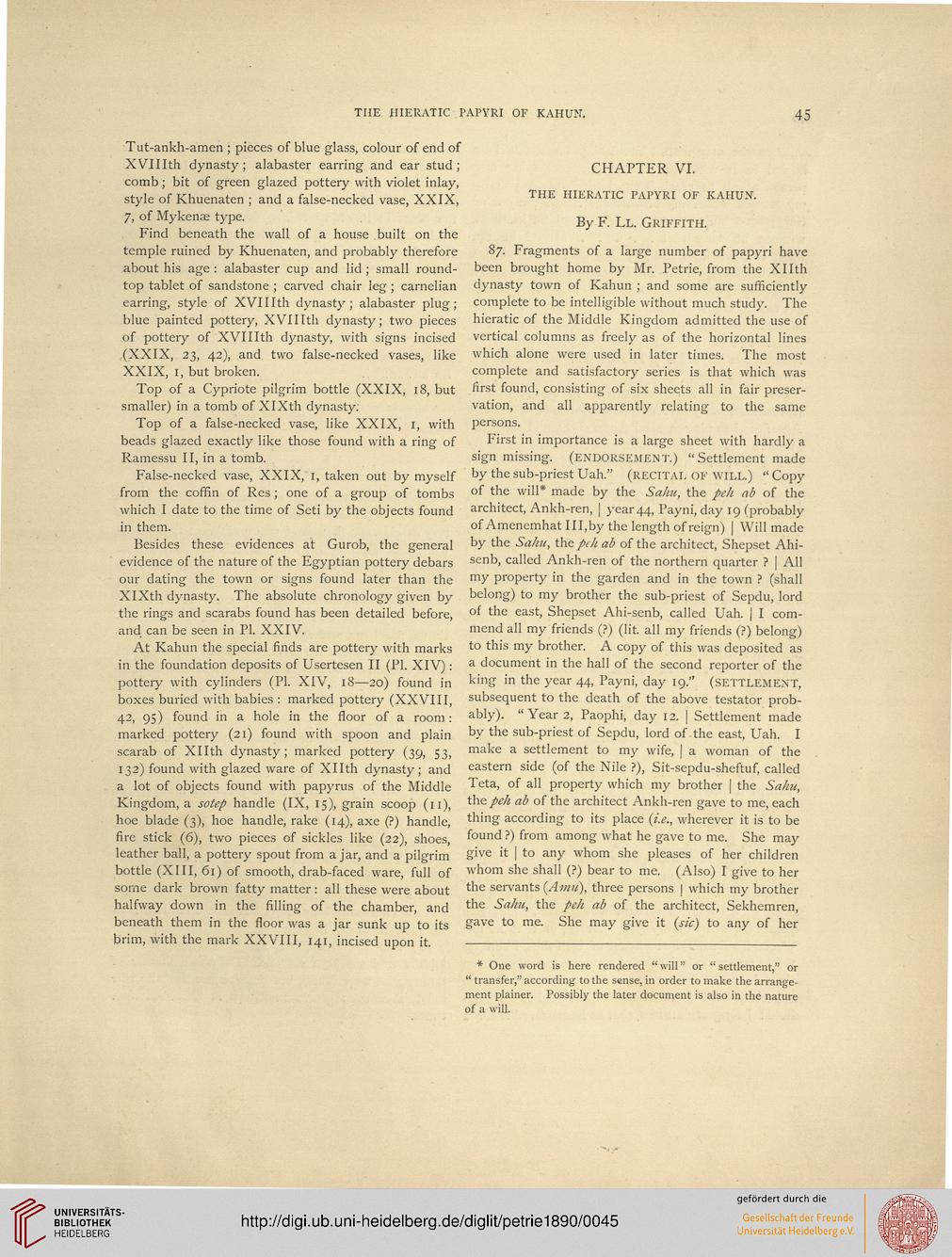 Information about OCR text
THE HIERATIC PAPYRI OF KAHUN.

Find beneath the wall of a house built on the
temple ruined by Khuenaten, and probably therefore
about his age : alabaster cup and lid ; small round-
top tablet of sandstone ; carved chair leg; carnelian
earring, style of XVTIIth dynasty; alabaster plug;
blue painted pottery, XVIIIth dynasty; two pieces
of pottery of XVIIIth dynasty, with signs incised
(XXIX, 23, 42), and two false-necked vases, like
XXIX, 1, but broken.

Top of a Cypriote pilgrim bottle (XXIX, 18, but
smaller) in a tomb of XlXth dynasty:

Top of a false-necked vase, like XXIX, 1, with
beads glazed exactly like those found with a ring of
Ramessu II, in a tomb.

False-necked vase, XXIX, 1, taken out by myself
from the coffin of Res; one of a group of tombs
which I date to the time of Seti by the objects found
in them.

Besides these evidences at Gurob, the general
evidence of the nature of the Egyptian pottery debars
our dating the town or signs found later than the
XlXth dynasty. The absolute chronology given by
the rings and scarabs found has been detailed before,
and. can be seen in PL XXIV.

At Kahun the special finds are pottery with marks
in the foundation deposits of Usertesen II (PL XIV) :
pottery with cylinders (PI. XIV, 18—20) found in
boxes buried with babies : marked pottery (XXVIII,
42, 95) found in a hole in the floor of a room:
marked pottery (21) found with spoon and plain
scarab of Xllth dynasty; marked pottery (39, 53,
132) found with glazed ware of Xllth dynasty; and
a lot of objects found with papyrus of the Middle
Kingdom, a sotep handle (IX, 15), grain scoop (11),
hoe blade (3), hoe handle, rake (14), axe (?) handle,
fire stick (6), two pieces of sickles like (22), shoes,
leather ball, a pottery spout from a jar, and a pilgrim
bottle (XIII, 61) of smooth, drab-faced ware, full of
some dark brown fatty matter: all these were about
halfway down in the filling of the chamber, and
beneath them in the floor was a jar sunk up to its
brim, with the mark XXVIII, 141, incised upon it.

THE HIERATIC PAPYRI OF KAHUN.

87. Fragments of a large number of papyri have
been brought home by Mr. Petrie, from the Xllth
dynasty town of Kahun ; and some are sufficiently
complete to be intelligible without much study. The
hieratic of the Middle Kingdom admitted the use of
vertical columns as freely as of the horizontal lines
which alone were used in later times. The most
complete and satisfactory series is that which was
first found, consisting of six sheets all in fair preser-
vation, and all apparently relating to the same
persons.

* One word is here rendered " will" or " settlement," or
" transfer," according to the sense, in order to make the arrange-
ment plainer. Possibly the later document is also in the nature
of a will.