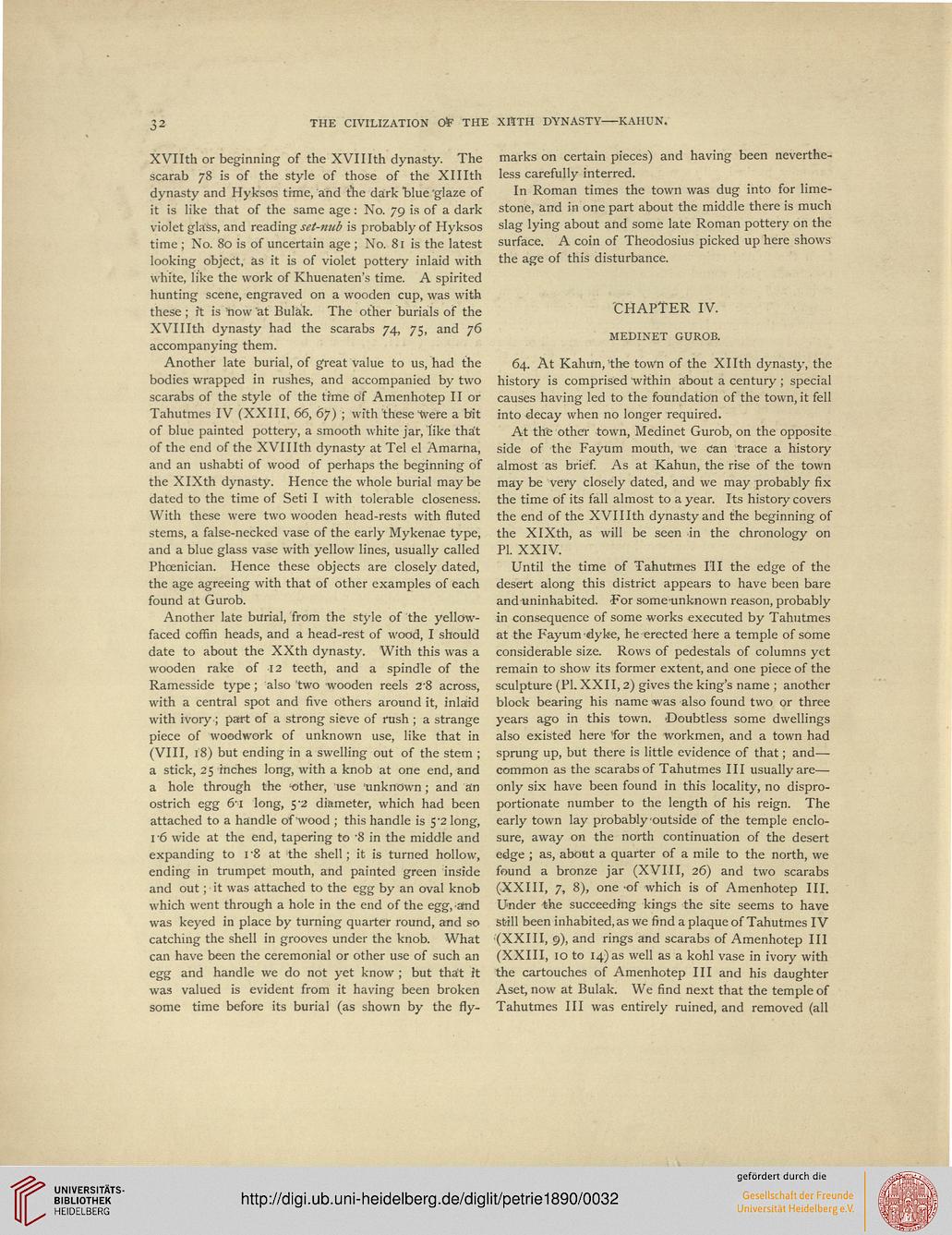 XVIIth or beginning of the XVIIIth dynasty. The
scarab 78 is of the style of those of the XHIth
dynasty and Hyksos time, and t"he dark blue 'glaze of
it is like that of the same age: No. 79 is of a dark
violet glass, and reading set-nub is probably of Hyksos
time ; No. 80 is of uncertain age ; No. 81 is the latest
looking object, as it is of violet pottery inlaid with
white, like the work of Khuenaten's time. A spirited
hunting scene, engraved on a wooden cup, was with
these ; it is "tiow at Bulak. The other burials of the
XVIIIth dynasty had the scarabs 74, 75, and 76
accompanying them.

Another late burial, of great value to us, had the
bodies wrapped in rushes, and accompanied by two
scarabs of the style of the time rif Amenhotep II or
Tahutmes IV (XXIII, 66, 6j) ; with these Tvere a bit
of blue painted pottery, a smooth white jar, like that
of the end of the XVIIIth dynasty at Tel el Amarna,
and an ushabti of wood of perhaps the beginning of
the XlXth dynasty. Hence the whole burial maybe
dated to the time of Seti I with tolerable closeness.
With these were two wooden head-rests with fluted
stems, a false-necked vase of the early Mykenae type,
and a blue glass vase with yellow lines, usually called
Phoenician. Hence these objects are closely dated,
the age agreeing with that of other examples of each
found at Gurob.

Another late burial, from the style of the yellow-
faced coffin heads, and a head-rest of wood, I should
date to about the XXth dynasty. With this was a
wooden rake of 12 teeth, and a spindle of the
Ramesside type; also two wooden reels 2'8 across,
with a central spot and five others around it, inlaid
with ivory.; part of a strong sieve of rush ; a strange
piece of woodwork of unknown use, like that in
(VIII, 18) but ending in a swelling out of the stem ;
a stick, 25 inches long, with a knob at one end, and
a hole through the 'other, use 'unknown; and an
ostrich egg 6-i long, 5'2 diameter, which had been
attached to a handle of'wood ; this handle is 5'2 long,
v6 wide at the end, tapering to '8 in the middle and
expanding to 18 at the shell; it is turned hollow,
ending in trumpet mouth, and painted green inside
and out; it was attached to the egg by an oval knob
which went through a hole in the end of the egg,-and
was keyed in place by turning quarter round, and so
catching the shell in grooves under the knob. What
can have been the ceremonial or other use of such an
egg and handle we do not yet know; but that it
was valued is evident from it having been broken
some time before its burial (as shown by the fly-

marks on certain pieces) and having been neverthe-
less carefully interred.

In Roman times the town was dug into for lime-
stone, and in one part about the middle there is much
slag lying about and some late Roman pottery on the
surface. A coin of Theodosius picked up here shows
the age of this disturbance.

64. At Kahun, the town of the Xllth dynasty, the
history is comprised within about a century ; special
causes having led to the foundation of the town, it fell
into decay when no longer required.

At the other town, Medinet Gurob, on the opposite
side of the Fayum mouth, we dan trace a history
almost as brief. As at Kahun, the rise of the town
may be very closely dated, and we may probably fix
the time of its fall almost to a year. Its history covers
the end of the XVIIIth dynasty and the beginning of
the XlXth, as will be seen in the chronology on
PI. XXIV.

Until the time of Tahutmes HI the edge of the
desert along this district appears to have been bare
and uninhabited. For some-unknown reason, probably
in consequence of some works executed by Tahutmes
at the Fayum dyke, he erected here a temple of some
considerable size. Rows of pedestals of columns yet
remain to show its former extent, and one piece of the
sculpture (PL XXII, 2) gives the king's name ; another
block bearing his name was also found two or three
years ago in this town. -Doubtless some dwellings
also existed here for the Workmen, and a town had
sprung up, but there is little evidence of that; and—
common as the scarabs of Tahutmes III usually are—
only six have been found in this locality, no dispro-
portionate number to the length of his reign. The
early town lay probably outside of the temple enclo-
sure, away on the north continuation of the desert
edge ; as, about a quarter of a mile to the north, we
found a bronze jar (XVIII, 26) and two scarabs
(XXIII, 7, 8), one -of which is of Amenhotep III.
Under the succeeding kings the site seems to have
still been inhabited, as we find a plaque of Tahutmes IV
(XXIII, 9), and rings and scarabs of Amenhotep III
(XXIII, 10 to 14) as well as a kohl vase in ivory with
the cartouches of Amenhotep III and his daughter
Aset, now at Bulak. We find next that the temple of
Tahutmes III was entirely ruined, and removed (all