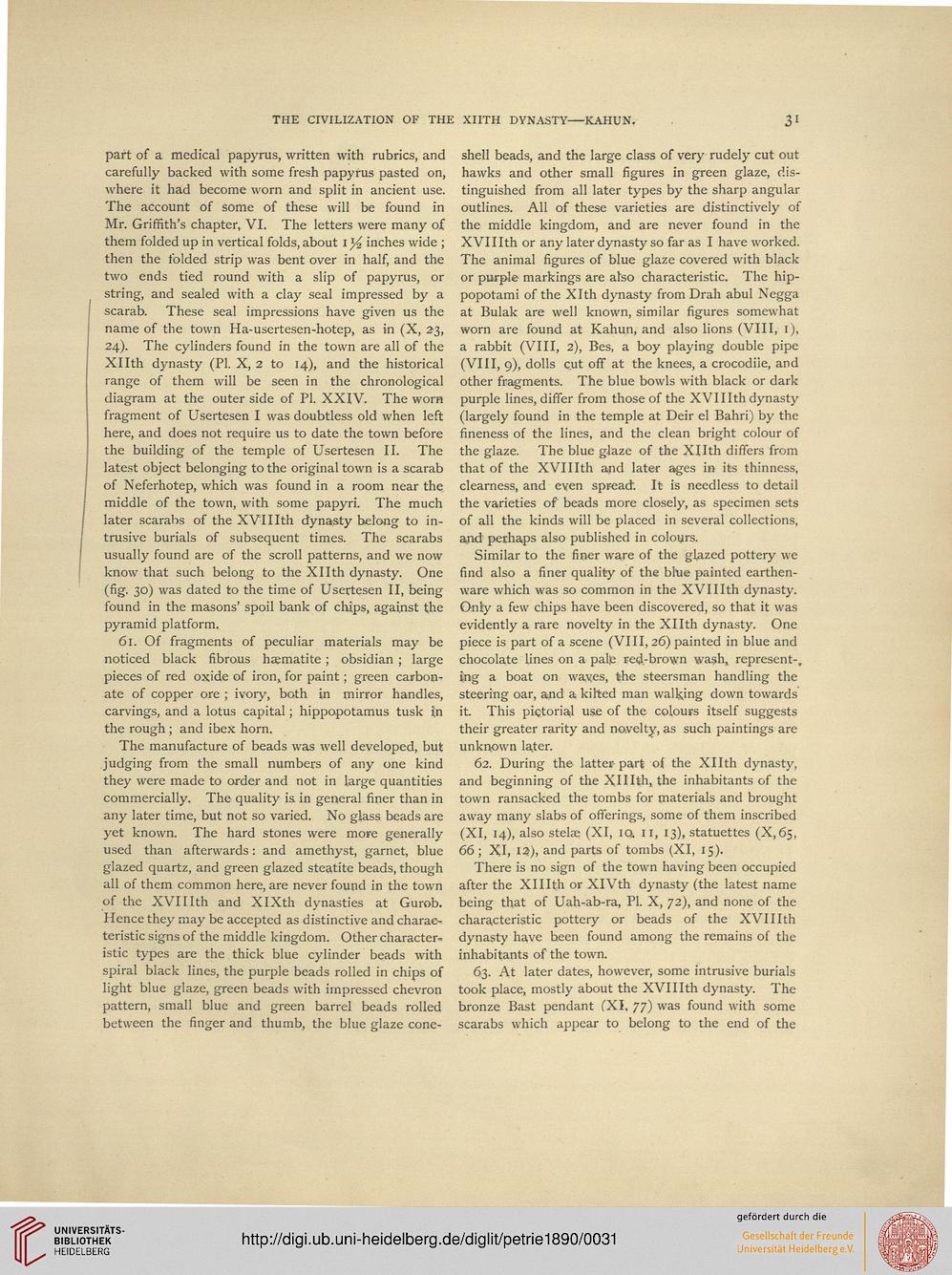 Information about OCR text
THE CIVILIZATION OF THE XIITH DYNASTY----KAHUN.

part of a medical papyrus, written with rubrics, and
carefully backed with some fresh papyrus pasted on,
where it had become worn and split in ancient use.
The account of some of these will be found in
Mr. Griffith's chapter, VI. The letters were many of
them folded up in vertical folds, about I y2 inches wide ;
then the folded strip was bent over in half, and the
two ends tied round with a slip of papyrus, or
string, and sealed with a clay seal impressed by a
scarab. These seal impressions have given us the
name of the town Ha-usertesen-hotep, as in (X, 23,
24). The cylinders found in the town are all of the
Xllth dynasty (PI. X, 2 to 14), and the historical
range of them will be seen in the chronological
diagram at the outer side of PL XXIV. The worn
fragment of Usertesen I was doubtless old when left
here, and does not require us to date the town before
the building of the temple of Usertesen II. The
latest object belonging to the original town is a scarab
of Neferhotep, which was found in a room near the
middle of the town, with some papyri. The much
later scarabs of the XVIIIth dynasty belong to in-
trusive burials of subsequent times. The scarabs
usually found are of the scroll patterns, and we now
know that such belong to the Xllth dynasty. One
(fig. 30) was dated to the time of Usertesen II, being
found in the masons' spoil bank of chips, against the
pyramid platform,

61. Of fragments of peculiar materials may be
noticed black fibrous haematite; obsidian ; large
pieces of red oxide of iron,, for paint; green carbon-
ate of copper ore ; ivory, both in mirror handles,
carvings, and a lotus capital; hippopotamus tusk i;n
the rough ; and ibex horn.

The manufacture of beads was well developed, but
judging from the small numbers of any one kind
they were made to order and not in large quantities
commercially. The quality is in general finer than in
any later time, but not so varied. No glass beads are
yet known. The hard stones were more generally
used than afterwards: and amethyst, garnet, blue
glazed quartz, and green glazed steatite beads, though
all of them common here, are never found in the town
of the XVIIIth and XlXth dynasties at Gurob.
Hence they may be accepted as distinctive and charac-
teristic signs of the middle kingdom. Other character-
istic types are the thick blue cylinder beads with
spiral black lines, the purple beads rolled in chips of
light blue glaze, green beads with impressed chevron
pattern, small blue and green barrel beads rolled
between the finger and thumb, the blue glaze cone-

shell beads, and the large class of very rudely cut out
hawks and other small figures in green glaze, dis-
tinguished from all later types by the sharp angular
outlines. All of these varieties are distinctively of
the middle kingdom, and are never found in the
XVIIIth or any later dynasty so far as I have worked.
The animal figures of blue glaze covered with black
or purple markings are also characteristic. The hip-
popotami of the Xlth dynasty from Drah abul Negga
at Bulak are well known, similar figures somewhat
worn are found at Kahun, and also lions (VIII, 1),
a rabbit (VIII, 2), Bes, a boy playing double pipe
(VIII, 9), dolls cut off at the knees, a crocodile, and
other fragments. The blue bowls with black or dark
purple lines, differ from those of the XVIIIth dynasty
(largely found in the temple at Deir el Bahri) by the
fineness of the lines, and the clean bright colour of
the glaze. The blue glaze of the Xllth differs from
that of the XVIIIth and later ages in its thinness,
clearness, and even spread. It is needless to detail
the varieties of beads more closely, as specimen sets
of all the kinds will be placed in several collections,
and perhaps also published in colours.

Similar to the finer ware of the glazed pottery we
find also a finer quality of the blue painted earthen-
ware which was so common in the XVIIIth dynasty.
Only a few chips have been discovered, so that it was
evidently a rare novelty in the Xllth dynasty. One
piece is part of a scene (VIII, 26) painted in blue and
chocolate lines on a palp red-brown wash, represent-,
ing a boat on waves, the steersman handling the
steering oar, and a kilted man walking down towards
it. This pictorial use of the colours itself suggests
their greater rarity and novelty, as such paintings are
unknown later.

There is no sign of the town having been occupied
after the Xlllth or XlVth dynasty (the latest name
being that of Uah-ab-ra, PI. X, 72), and none of the
characteristic pottery or beads of the XVIIIth
dynasty have been found among the remains of the
inhabitants of the town.

63. At later dates, however, some intrusive burials
took place, mostly about the XVIIIth dynasty. The
bronze Bast pendant (XI, 77) was found with some
scarabs which appear to belong to the end of the