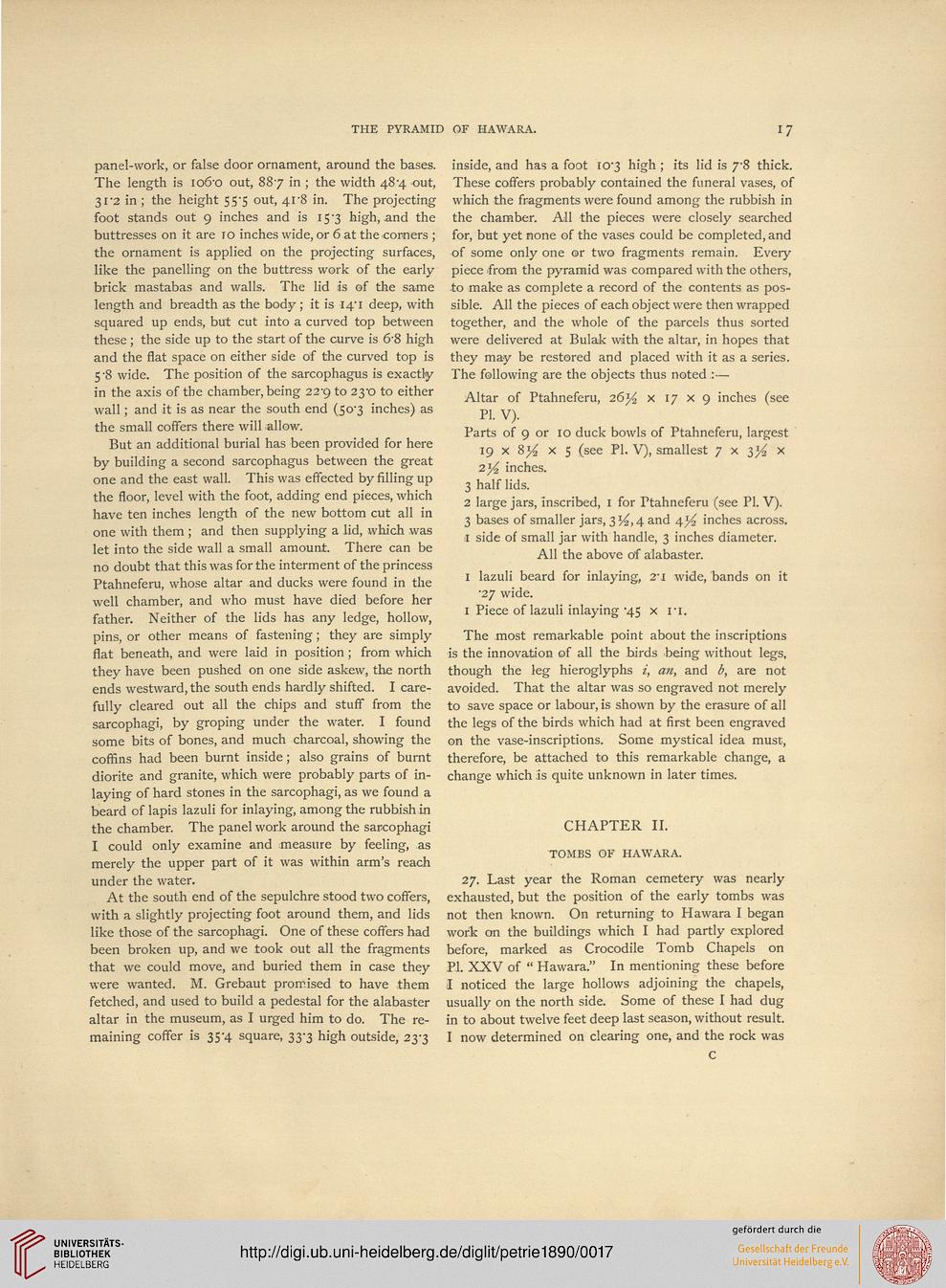 Information about OCR text
THE PYRAMID OF HAWARA.

panel-work, or false door ornament, around the bases.
The length is io6-o out, 887 in ; the width 48-4 out,
312 in ; the height 55*5 out, 41-8 in. The projecting
foot stands out 9 inches and is 15-3 high, and the
buttresses on it are 10 inches wide, or 6 at the corners ;
the ornament is applied on the projecting surfaces,
like the panelling on the buttress work of the early
brick mastabas and walls. The lid is of the same
length and breadth as the body ; it is 14'1 deep, with
squared up ends, but cut into a curved top between
these ; the side up to the start of the curve is &8 high
and the flat space on either side of the curved top is
5'8 wide. The position of the sarcophagus is exactly
in the axis of the chamber, being 22-9 to 23-0 to either
wall; and it is as near the south end (So'3 inches) as
the small coffers there will allow.

But an additional burial has been provided for here
by building a second sarcophagus between the great
one and the east wall. This was effected by filling up
the floor, level with the foot, adding end pieces, which
have ten inches length of the new bottom cut all in
one with them ; and then supplying a lid, which was
let into the side wall a small amount. There can be
no doubt that this was for the interment of the princess
Ptahneferu, whose altar and ducks were found in the
well chamber, and who must have died before her
father. Neither of the lids has any ledge, hollow,
pins, or other means of fastening; they are simply
flat beneath, and were laid in position; from which
they have been pushed on one side askew, the north
ends westward, the south ends hardly shifted. I care-
fully cleared out all the chips and stuff from the
sarcophagi, by groping under the water. I found
some bits of bones, and much charcoal, showing the
coffins had been burnt inside; also grains of burnt
diorite and granite, which were probably parts of in-
laying of hard stones in the sarcophagi, as we found a
beard of lapis lazuli for inlaying, among the rubbish in
the chamber. The panel work around the sarcophagi
I could only examine and measure by feeling, as
merely the upper part of it was within arm's reach
under the water.

At the south end of the sepulchre stood two coffers,
with a slightly projecting foot around them, and lids
like those of the sarcophagi. One of these coffers had
been broken up, and we took out all the fragments
that we could move, and buried them in case they
were wanted. M. Grebaut promised to have them
fetched, and used to build a pedestal for the alabaster
altar in the museum, as I urged him to do. The re-
maining coffer is 35-4 square, 33-3 high outside, 23-3

inside, and has a foot io-3 high ; its lid is y8 thick.
These coffers probably contained the funeral vases, of
which the fragments were found among the rubbish in
the chamber. All the pieces were closely searched
for, but yet none of the vases could be completed, and
of some only one or two fragments remain. Every
piece from the pyramid was compared with the others,
to make as complete a record of the contents as pos-
sible. All the pieces of each object were then wrapped
together, and the whole of the parcels thus sorted
were delivered at Bulak with the altar, in hopes that
they may be restored and placed with it as a series.
The following are the objects thus noted :—

PL V).
Parts of 9 or 10 duck bowls of Ptahneferu, largest

All the above of alabaster.

1 lazuli beard for inlaying, 2-i wide, bands on it

The most remarkable point about the inscriptions
is the innovation of all the birds being without legs,
though the leg hieroglyphs i, an, and b, are not
avoided. That the altar was so engraved not merely
to save space or labour, is shown by the erasure of all
the legs of the birds which had at first been engraved
on the vase-inscriptions. Some mystical idea must,
therefore, be attached to this remarkable change, a
change which is quite unknown in later times.

27. Last year the Roman cemetery was nearly
exhausted, but the position of the early tombs was
not then known. On returning to Hawara I began
work on the buildings which I had partly explored
before, marked as Crocodile Tomb Chapels on
PI. XXV of " Hawara." In mentioning these before
I noticed the large hollows adjoining the chapels,
usually on the north side. Some of these I had dug
in to about twelve feet deep last season, without result.
I now determined on clearing one, and the rock was