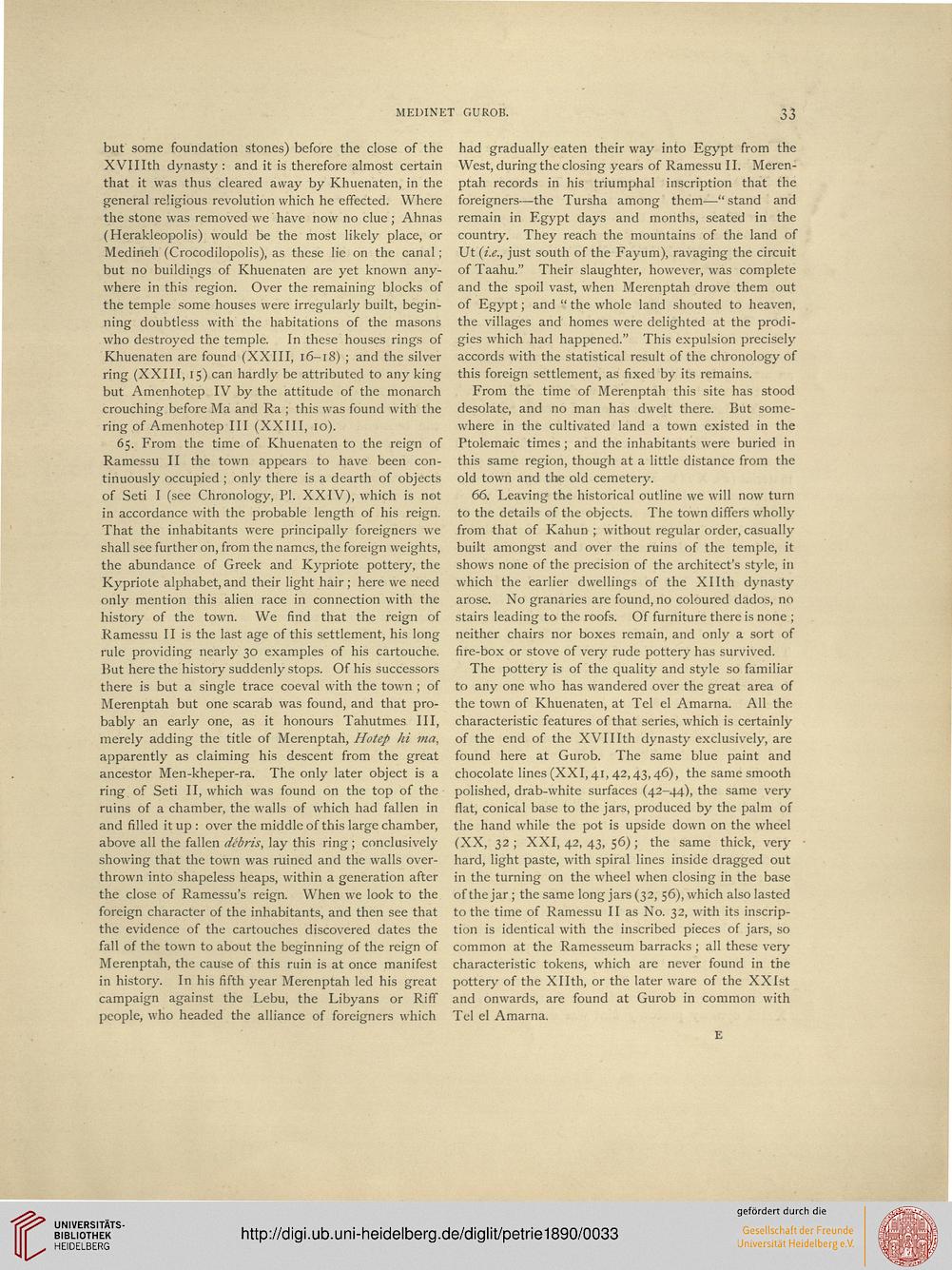 but some foundation stones) before the close of the
XVIIIth dynasty : and it is therefore almost certain
that it was thus cleared away by Khuenaten, in the
general religious revolution which he effected. Where
the stone was removed we have now no clue ; Ahnas
(Herakleopolis) would be the most likely place, or
Medineh (Crocodilopolis), as these lie on the canal;
but no buildings of Khuenaten are yet known any-
where in this region. Over the remaining blocks of
the temple some houses were irregularly built, begin-
ning doubtless with the habitations of the masons
who destroyed the temple. In these houses rings of
Khuenaten are found (XXIII, 16-18) ; and the silver
ring (XXIII, 15) can hardly be attributed to any king
but Amenhotep IV by the attitude of the monarch
crouching before Ma and Ra ; this was found with the
ring of Amenhotep III (XXIII, 10).

65. From the time of Khuenaten to the reign of
Ramessu II the town appears to have been con-
tinuously occupied ; only there is a dearth of objects
of Seti I (see Chronology, PI. XXIV), which is not
in accordance with the probable length of his reign.
That the inhabitants were principally foreigners we
shall see further on, from the names, the foreign weights,
the abundance of Greek and Kypriote pottery, the
Kypriote alphabet, and their light hair; here we need
only mention this alien race in connection with the
history of the town. We find that the reign of
Ramessu II is the last age of this settlement, his long
rule providing nearly 30 examples of his cartouche.
But here the history suddenly stops. Of his successors
there is but a single trace coeval with the town ; of
Merenptah but one scarab was found, and that pro-
bably an early one, as it honours Tahutmes III,
merely adding the title of Merenptah, Hotep hi ma,
apparently as claiming his descent from the great
ancestor Men-kheper-ra. The only later object is a
ring of Seti II, which was found on the top of the
ruins of a chamber, the walls of which had fallen in
and filled it up : over the middle of this large chamber,
above all the fallen debris, lay this ring; conclusively
showing that the town was ruined and the walls over-
thrown into shapeless heaps, within a generation after
the close of Ramessu's reign. When we look to the
foreign character of the inhabitants, and then see that
the evidence of the cartouches discovered dates the
fall of the town to about the beginning of the reign of
Merenptah, the cause of this ruin is at once manifest
in history. In his fifth year Merenptah led his great
campaign against the Lebu, the Libyans or Riff
people, who headed the alliance of foreigners which

had gradually eaten their way into Egypt from the
West, during the closing years of Ramessu II. Meren-
ptah records in his triumphal inscription that the
foreigners—the Tursha among them—"stand and
remain in Egypt days and months, seated in the
country. They reach the mountains of the land of
Ut (i.e., just south of the Fayum), ravaging the circuit
of Taahu." Their slaughter, however, was complete
and the spoil vast, when Merenptah drove them out
of Egypt; and " the whole land shouted to heaven,
the villages and homes were delighted at the prodi-
gies which had happened." This expulsion precisely
accords with the statistical result of the chronology of
this foreign settlement, as fixed by its remains.

From the time of Merenptah this site has stood
desolate, and no man has dwelt there. But some-
where in the cultivated land a town existed in the
Ptolemaic times ; and the inhabitants were buried in
this same region, though at a little distance from the
old town and the old cemetery.

66. Leaving the historical outline we will now turn
to the details of the objects. The town differs wholly
from that of Kahun ; without regular order, casually
built amongst and over the ruins of the temple, it
shows none of the precision of the architect's style, in
which the earlier dwellings of the Xllth dynasty
arose. No granaries are found, no coloured dados, no
stairs leading to the roofs. Of furniture there is none ;
neither chairs nor boxes remain, and only a sort of
fire-box or stove of very rude pottery has survived.

The pottery is of the quality and style so familiar
to any one who has wandered over the great area of
the town of Khuenaten, at Tel el Amarna. All the
characteristic features of that series, which is certainly
of the end of the XVIIIth dynasty exclusively, are
found here at Gurob. The same blue paint and
chocolate lines (XXI, 41,42,43,46), the same smooth
polished, drab-white surfaces (42-44), the same very
flat, conical base to the jars, produced by the palm of
the hand while the pot is upside down on the wheel
(XX, 32 ; XXI, 42, 43, 56) ; the same thick, very
hard, light paste, with spiral lines inside dragged out
in the turning on the wheel when closing in the base
of the jar; the same long jars (32, 56), which also lasted
to the time of Ramessu II as No. 32, with its inscrip-
tion is identical with the inscribed pieces of jars, so
common at the Ramesseum barracks ; all these very
characteristic tokens, which are never found in the
pottery of the Xllth, or the later ware of the XXIst
and onwards, are found at Gurob in common with
Tel el Amarna.