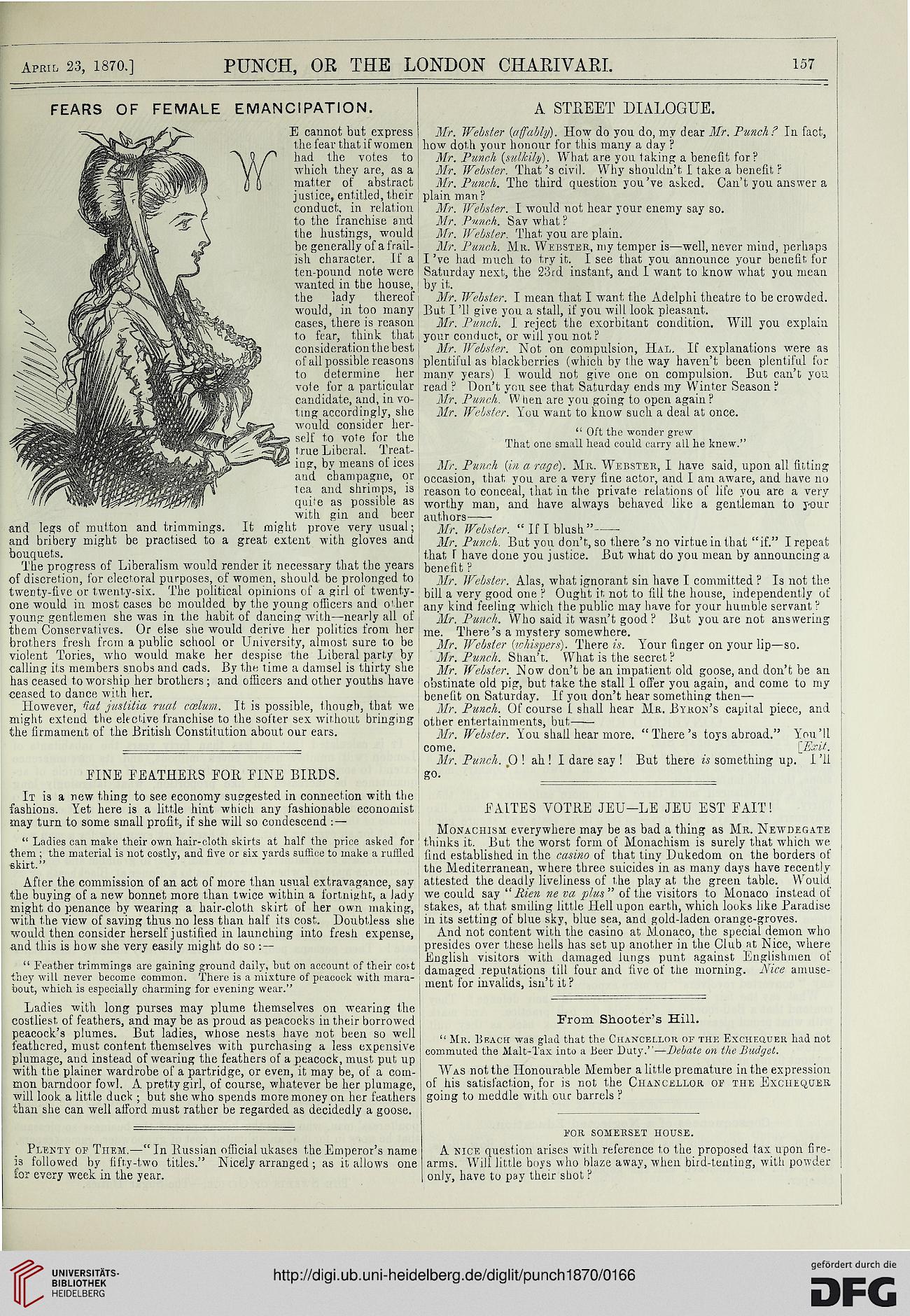 E cannot but express
the fear that if women
had the votes to
which they are, as a
matter of abstract
justice, entitled, their

and legs of mutton and trimmings. It might prove very usual
and bribery might be practised to a great extent with gloves and

Mr. Webster {affably). How do you do, my dear Mr. Punch ? In fact,
how doth your honour for this many a day ?

Mr. Punch (sulkily). What are you taking a benefit for?
Mr. Webster. That's civil. Why shouldn't I take a benefit ?
Mr. Punch. The third question you've asked. Can't you answer a
plain man?

conduct, in relation ] Mr. Webster. I would not hear your enemy say so.
to the franchise and ; Mr. Punch. Sav what ?

Mr. Webster. That you are plain.

Mr. Punch. Mr. Webster, my temper is—well, never mind, perhaps
I've had much to try it. I see that you announce your benefit for
Saturday next, the 23rd instant, and I want to know what you mean
by it.

Mr. Webster. I mean that I want the Adelphi theatre to be crowded.
But 1 '11 give you a stall, if you will look pleasant.
Mr. Punch. I reject the exorbitant condition. Will you explain
to fear, think that j your conduct, or will you not ?
considerationthebest j Mr. Webster. Not on compulsion, Hal. If explanations were as
of all possible reasons [ plentiful as blackberries (which by the way haven't been plentiful for
to determine _ her \ many years) I would not give one on compulsion. But can't you
vote for a particular , read ? Don't you see that Saturday ends my Winter Season ?
candidate, and, in vo- Mr. Punch. W lien are you going to open again ?
ting accordingly, she Mr. Webster. You want to know such a deal at once,
would consider her-1

ing, by means of ices j Mr. pmch (in a rage). Mr. Webster, I have said, upon all fitting
and champagne, or occasion, that you are a very fine actor, and I am aware, and have no
tea and shrimps, is reason to conceal, that in the private relations of life you are a very
quite as possible as worthy man, and have always behaved like a gentleman to your
with gin and beer auth0rs-

the hustings, would
be generally of afrail-
ish character. If a
ten-pound note were
wanted in the house,
the lady thereof
would, in too many
cases, there is reason

bouquets. ... i that T have done you justice. But what do you mean by announcing a

The progress of Liberalism would render it necessary that the years benefit ?
of discretion, for electoral purposes, of women, should be prolonged to : Mr. Webster. Alas, what ignorant sin have I committed ? Is not the
twenty-five or twenty-six. The political opinions of a girl of twenty- bill a very good one ? Ought it not to fill the house, independently of
one would in most cases be moulded by the young officers and o'her : anv fee)ing which the public may have for your humble servant?
young gentlemen she was m the habit of dancing with—nearly all of , Mr. Punch. Who said it wasn't good ? But you are not answering
them Conservatives. Or else she would derive her politics from her \ me There's a mystery somewhere.

brothers fresh from a public school or University, almost sure to be \ Mr. Webster (whispers). There is. Your finger on your lip—so.
violent Tories, who would make her despise the Liberal party by j Mr. Punch. Shan't. What is the secret ?

calling its members snobs and cads. By the time a damsel is thirty she j Mr. Webster. Now don't be an impatient old goose, and don't be an
has ceased to worship her brothers; and officers and other youths have I obstinate old pig, but take the stall 1 offer you again, and come to my
ceased to dance with her. ,! benefit on Saturday. If you don't hear something then—

However, <iat jushtia mat caelum. It is possible, though, that we J Mr. Punch. Of course 1 shall hear Mr. Byron's capital piece, and
might extend the elective tranchise to the sotter sex without bringing 0tber entertainments, but_

the firmament of the British Constitution about our ears.

Monachism everywhere may be as bad a thing as Mr. JNewdegate

" Ladies can make their own hair-cloth skirts at half the price asked for thinks it. But the worst form of Monachism is surely that which we
them | the material is not costly, and five or sis yards suffice to make a ruffled find established in the casino of that tiny Dukedom on the borders of
«kirt." the Mediterranean, where three suicides in as many days have recently

After the commission of an act of more than usual extravagance, say j attested the deadly liveliness of the play at the green table. Would
the buying of a new bonnet more than twice within a fortnight, a Jady we could say "Mien, ne va plus " of the visitors to Monaco instead of
might do penance by wearing a hair-cloth skirt of her own making, 1 stakes, at that smiling little Hell upon earth, which looks like Paradise
with the view of saving thus no less than half its cost. Doubtless she j in its setting of blue sky, blue sea, and gold-laden orange-groves,
would then consider herself justified in launching into fresh expense, And not content with the casino at Monaco, the special demon who
and this is how she very easily might do so :— presides over these hells has set up another in the Club at Nice, where

. . „ , , 1 English visitors with damaged lungs punt against Englishmen of

" Feather trimmings are gaining ground daily, but on account of their cut j damaged reputations till four and five of the morning. Nice amuse-
xney will never become common. there is a mixture oi peacock with mara- . j- • JIkj- : >Mf?

bout, which is especially charming for evening wear."

Ladies with long purses may plume themselves on wearing the
costliest of feathers, and may be as proud as peacocks in their borrowed
peacock's plumes. But ladies, whose nests have not been so well
feathered, must content themselves with purchasing a less expensive
plumage, and instead of wearing the feathers of a peacock, must put up
with the plainer wardrobe of a partridge, or even, it may be, of a com-
mon barndoor fowl. A pretty girl, of course, whatever be her plumage,
will look a little duck ; but she who spends more money on her feathers
than she can well afford must rather be regarded as decidedly a goose.

Plenty op Them.—"In Russian official ukases the Emperor's name
is followed by fifty-two titles." Nicely arranged ; as it allows one
Cor every week in the year.

" Mr. Beach was glad that the Chancellor of the Exchequer had not
commuted the Malt-lax into a Beer Duty."—Debate on the Budget.

Was not the Honourable Member a little premature in the expression
of his satisfaction, for is not the Chancellor op the Exchequer
going to meddle with our barrels ?

A nice question arises with reference to the proposed tax upon fire-
arms. Will little boys who blaze away, when bird-tenting, with powder
only, have to pay their shot ?