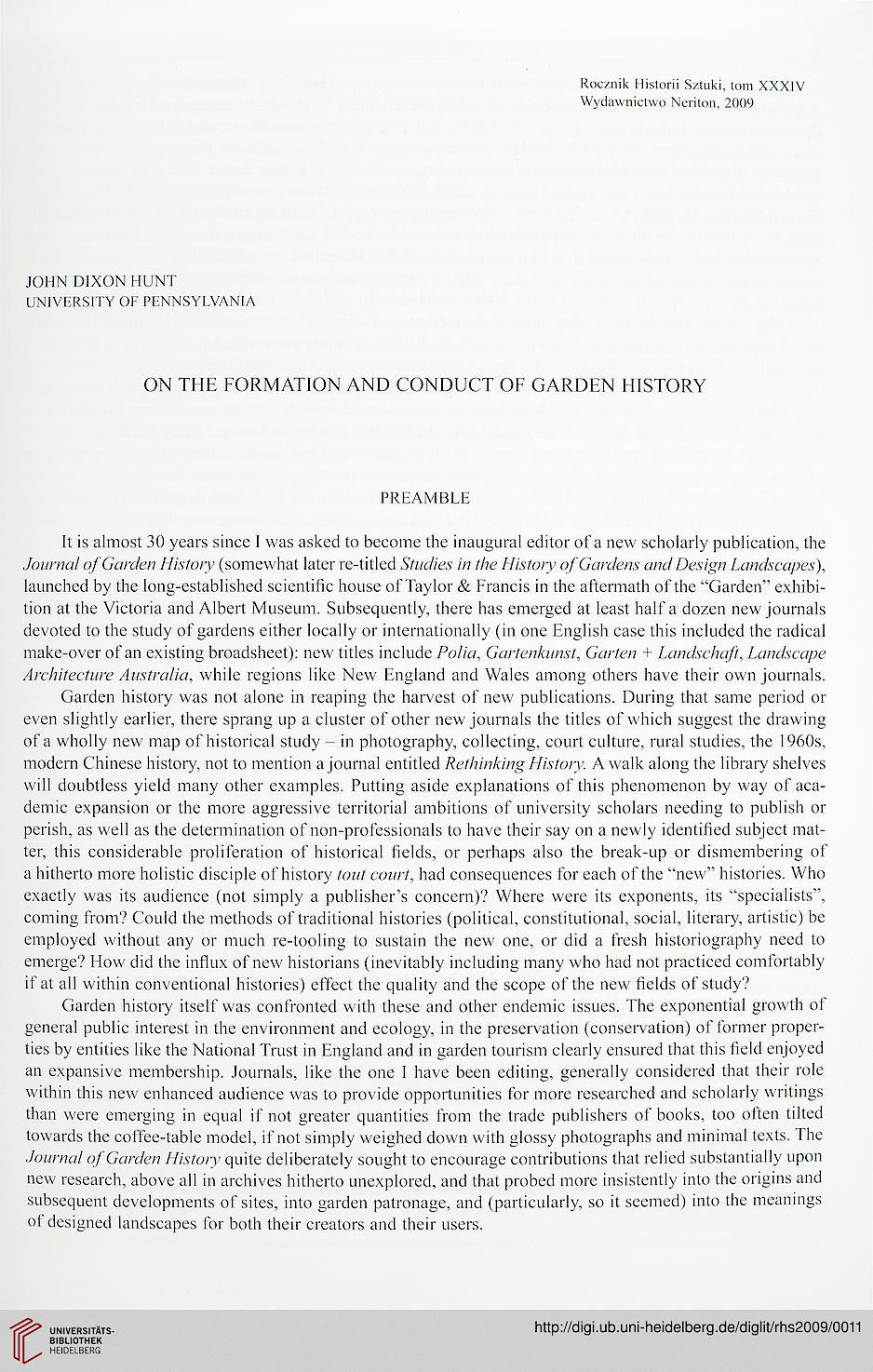 ON THE FORMATION AND CONDUCT OF GARDEN HISTORY

It is almost 30 years sińce I was asked to become the inaugural editor of a new scholarly publication, the
Journal of Garden History (somewhat later re-titled Studies in the History of Gardem and Design Landscapes),
launched by the long-established scientific house of Taylor & Francis in the aftermath of the "Garden" exhibi-
tion at the Victoria and Albert Muséum. Subsequently, there has emerged at least half a dozen new journals
devoted to the study of gardens either locally or internationally (in one English case this included the radical
make-over of an existing broadsheet): new titles include Polia, Gartenkunst, Garten + Landschaft, Landscape
Architecture Australia, while régions like New England and Wales among others have their own journals.

Garden history was not alone in reaping the harvest of new publications. During that same period or
even slightly earlier, there sprang up a cluster of other new journals the titles of which suggest the drawing
of a wholly new map of historical study - in photography, collecting, court culture, rural studies, the 1960s,
modern Chinese history, not to mention ajournai entitled Rethinking History. A walk along the library shelves
will doubtless yield many other examples. Putting aside explanations of this phenomenon by way of aca-
démie expansion or the more aggressive territorial ambitions of university scholars needing to publish or
perish, as well as the détermination of non-professionals to have their say on a newly identified subject mat-
ter, this considérable prolifération of historical fields, or perhaps also the break-up or dismembering of
a hitherto more holistic disciple of history tout court, had conséquences for each of the "new" historiés. Who
exactly was its audience (not simply a publisher's concern)? Where were its exponents, its "specialists",
coming from? Could the methods of traditional historiés (political, constitutional, social, literary, artistic) be
employed without any or much re-tooling to sustain the new one, or did a fresh historiography need to
émerge? How did the influx of new historians (inevitably including many who had not practiced comfortably
if at ail within conventional historiés) effect the quality and the scope of the new fields of study?

Garden history itself was confronted with thèse and other endémie issues. The exponential growth of
gênerai public interest in the environment and ecology, in the préservation (conservation) of former proper-
ties by entities like the National Trust in England and in garden tourism clearly ensured that this field enjoyed
an expansive membership. Journals, like the one I have been editing, generally considered that their role
within this new enhanced audience was to provide opportunities for more researched and scholarly writings
than were emerging in equal if not greater quantities from the trade publishers of books, too often tilted
towards the coffee-table model, if not simply weighed down with glossy photographs and minimal texts. The
Journal of Garden History quite deliberately sought to encourage contributions that relied substantially upon
new research, above ail in archives hitherto unexplored, and that probed more insistently into the origins and
subséquent developments of sites, into garden patronage, and (particularly, so it seemed) into the meanings
of designed landscapes for both their creators and their users.