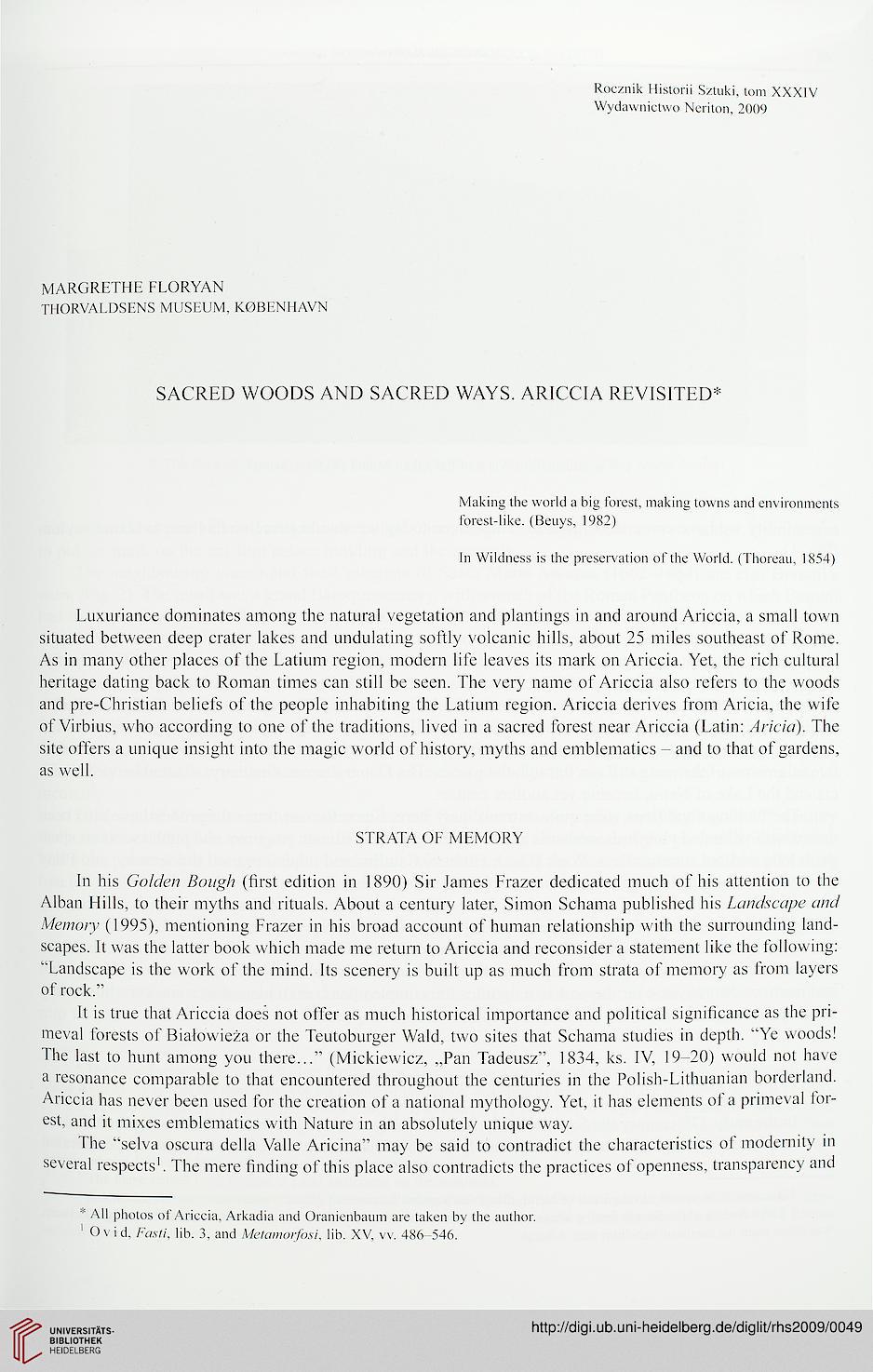 In Wildness is the préservation of the World. (Thoreau, 1854)

Luxuriance dominâtes among the natural végétation and plantings in and around Ariccia, a smali town
situated between deep crater lakes and undulating softly volcanic hills, about 25 miles southeast of Rome.
As in many other places of the Latium region, modern lite leaves its mark on Ariccia. Yet, the rich cultural
héritage dating back to Roman times can still be seen. The very name of Ariccia also refers to the woods
and pre-Christian beliefs of the people inhabiting the Latium region. Ariccia dérives from Aricia, the wife
of Virbius, who according to one of the traditions, lived in a sacred forest near Ariccia (Latin: Aricia). The
site offers a unique insight into the magie world of history, myths and emblematics - and to that of gardens,
as well.

In his Golden Bough (first édition in 1890) Sir James Frazer dedicated much of his attention to the
Alban Hills, to their myths and rituals. About a century later, Simon Schama published his Landscape and
Memory (1995), mentioning Frazer in his broad account of human relationship with the surrounding land-
scapes. It was the latter book which made me return to Ariccia and reconsider a statement like the following:
"Landscape is the work of the mind. Its scenery is built up as much from strata of memory as from layers
of rock."

It is true that Ariccia doeś not offer as much historical importance and political significance as the pri-
meval forests of Białowieża or the Teutoburger Wald, two sites that Schama studies in depth. "Ye woods!
The last to hunt among you there..." (Mickiewicz, „Pan Tadeusz", 1834, ks. IV, 19-20) would not have
a résonance comparable to that encountered throughout the centuries in the Polish-Lithuanian borderland.
Ariccia has never been used for the création of a national mythology. Yet, it has éléments of a primeval for-
est, and it mixes emblematics with Nature in an absolutely unique way.

The "selva oscura délia Valle Aricina" may be said to contradict the characteristics of modernity in
several respects1. The mere finding of this place also contradicts the practices of openness, transparency and