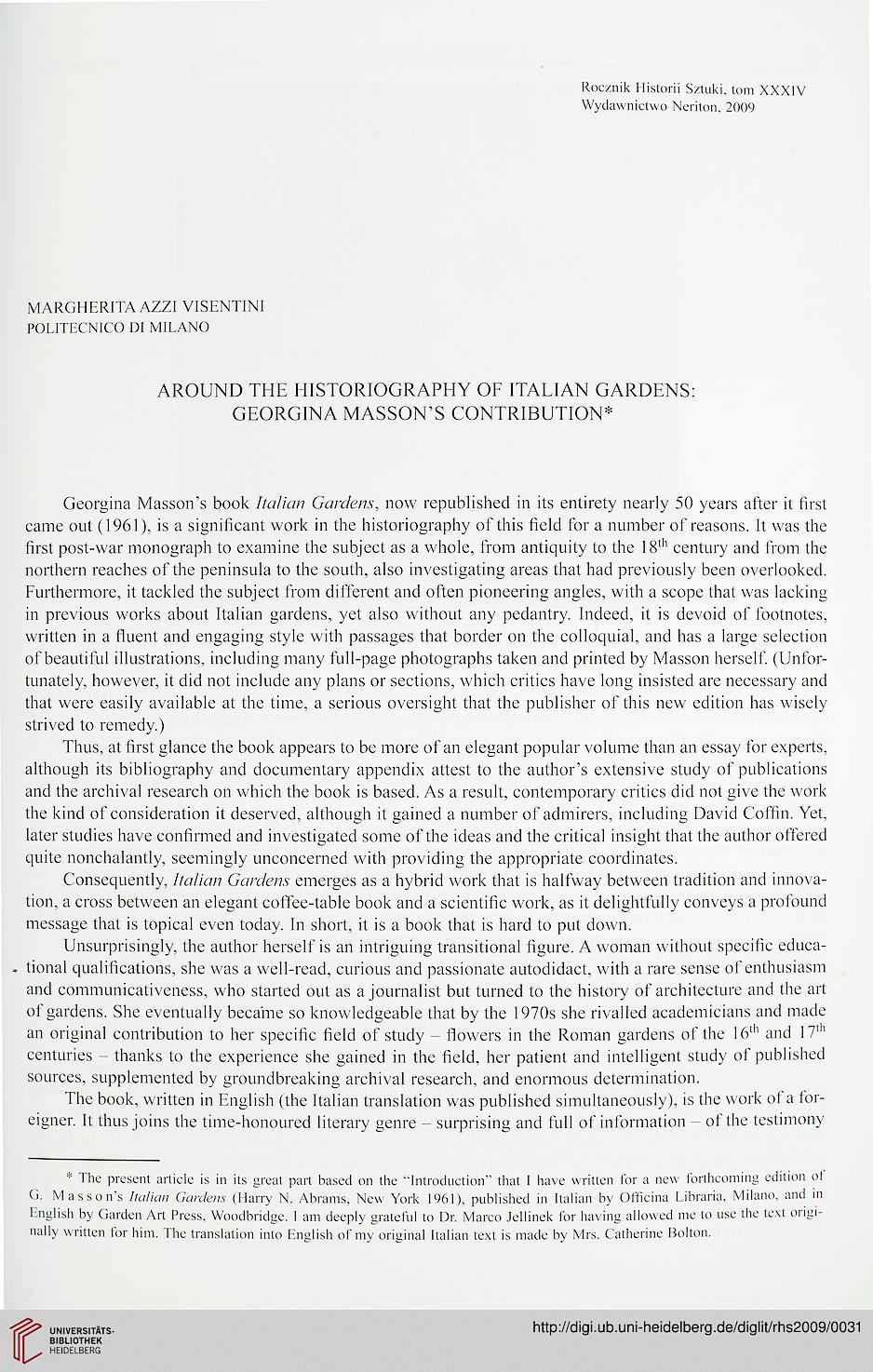 AROUND THE HISTORIOGRAPHY OF ITALIAN GARDENS:
GEORGINA MASSON'S CONTRIBUTION*

Georgina Masson's book Italian Gardem, now republished in its entirety nearly 50 years after it first
came out (1961), is a significant work in the historiography of this field for a number of reasons. It was the
first post-war monograph to examine the subject as a whole, from antiquity to the 18th century and from the
northern reaches of the peninsula to the south, also investigating areas that had previously been overlooked.
Furthermore, it tackled the subject from différent and often pioneering angles, with a scope that was lacking
in previous works about Italian gardens, yet also without any pedantry. Indeed, it is devoid of footnotes,
written in a fluent and engaging style with passages that border on the colloquial, and has a large sélection
of beautiful illustrations, including many full-page photographs taken and printed by Masson herself. (Unfor-
tunately, however, it did not include any plans or sections, which critics have long insisted are necessary and
that were easily available at the time, a serious oversight that the publisher of this new édition has wisely
strived to remedy.)

Thus, at first glance the book appears to be more of an elegant popular volume than an essay for experts,
although its bibliography and documentary appendix attest to the author's extensive study of publications
and the archivai research on which the book is based. As a resuit, contemporary critics did not give the work
the kind of considération it deserved, although it gained a number of admirers, including David Coffin. Yet,
later studies have confirmed and investigated some of the ideas and the critical insight that the author offered
quite nonchalantly, seemingly unconcerned with providing the appropriate coordinates.

Consequently, Italian Gardens émerges as a hybrid work that is halfway between tradition and innova-
tion, a cross between an elegant coffee-table book and a scientific work, as it delightfully conveys a profound
message that is topical even today. In short, it is a book that is hard to put down.

Unsurprisingly, the author herself is an intriguing transitional figure. A woman without spécifie educa-
« tional qualifications, she was a well-read, curious and passionate autodidact, with a rare sensé of enthusiasm
and communicativeness, who started out as a journalist but turned to the hi story of architecture and the art
of gardens. She eventually beca'me so knowledgeable that by the 1970s she rivalled academicians and made
an original contribution to her spécifie field of study - flowers in the Roman gardens of the 16* and 17
centuries - thanks to the expérience she gained in the field, her patient and intelligent study of published
sources, supplemented by groundbreaking archivai research, and enormous détermination.

The book, written in English (the Italian translation was published simultaneously), is the work of a for-
eigner. It thus joins the time-honoured literary genre - surprising and full of information - of the testimony

* The présent article is in its great part based on the "Introduction" that I have written for a new fortheoming édition oi
G. Masson's Italian Gardens (Harry N. Abrams, New York 1961), published in Italian by Officina Libraria, Milano, and in
English by Garden Art Press, Woodbridge. 1 am deeply grateful to Dr. Marco Jellinek for having allowed me to use the text origi-
nally written for him. The translation into English of my original Italian text is made by Mrs. Catherine Bolton.