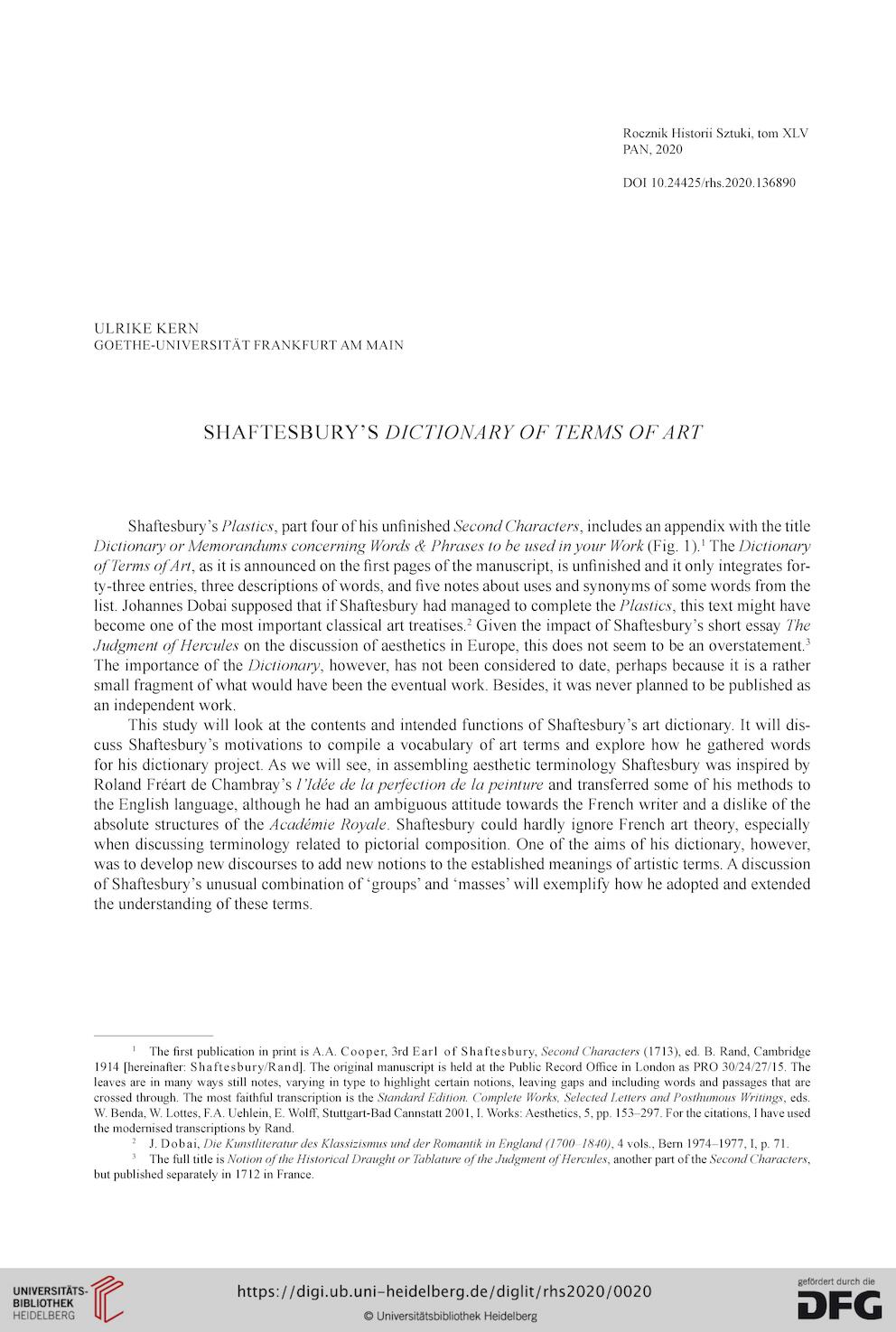 Shaftesbury’s Plastics, part four of his unfinished Second Characters, includes an appendix with the title
Dictionary or Memorandums concerning Words & Phrases to be used in your Work (Fig. I).1 The Dictionary
of Terms of Art, as it is announced on the first pages of the manuscript, is unfinished and it only integrates for-
ty-three entries, three descriptions of words, and five notes about uses and synonyms of some words from the
list. Johannes Dobai supposed that if Shaftesbury had managed to complete the Plastics, this text might have
become one of the most important classical art treatises.2 Given the impact of Shaftesbury’s short essay The
Judgment of Hercules on the discussion of aesthetics in Europe, this does not seem to be an overstatement.3
The importance of the Dictionary, however, has not been considered to date, perhaps because it is a rather
small fragment of what would have been the eventual work. Besides, it was never planned to be published as
an independent work.
This study will look at the contents and intended functions of Shaftesbury’s art dictionary. It will dis-
cuss Shaftesbury’s motivations to compile a vocabulary of art terms and explore how he gathered words
for his dictionary project. As we will see, in assembling aesthetic terminology Shaftesbury was inspired by
Roland Fréart de Chambray’s l’Idée de la perfection de la peinture and transferred some of his methods to
the English language, although he had an ambiguous attitude towards the French writer and a dislike of the
absolute structures of the Académie Royale. Shaftesbury could hardly ignore French art theory, especially
when discussing terminology related to pictorial composition. One of the aims of his dictionary, however,
was to develop new discourses to add new notions to the established meanings of artistic terms. A discussion
of Shaftesbury’s unusual combination of ‘groups’ and ‘masses’ will exemplify how he adopted and extended
the understanding of these terms.

1 The first publication in print is A.A. Cooper, 3rd Earl of Shaftesbury, Second Characters (1713), ed. B. Rand, Cambridge
1914 [hereinafter: Shaftesbury/Rand], The original manuscript is held at the Public Record Office in London as PRO 30/24/27/15. The
leaves are in many ways still notes, varying in type to highlight certain notions, leaving gaps and including words and passages that are
crossed thr ough. The most faithful tr anscription is the Standard Edition. Complete Works, Selected Letters and Posthumous Writings, eds.
W. Benda, W. Lottes, F.A. Uehlein, E. Wolff, Stuttgart-Bad Cannstatt 2001,1. Works: Aesthetics, 5, pp. 153-297. For the citations, I have used
the modernised h anscriptions by Rand.
2 J. Dobai, Die Kunstliteratur des Klassizismus und der Romantik in England (1700--1840), 4 vols., Bem 1974-1977,1, p. 71.
3 The full title is Notion of the Historical Draught or Tablature of the Judgment of Hercules, another part of the Second Characters,
but published separately in 1712 in France.