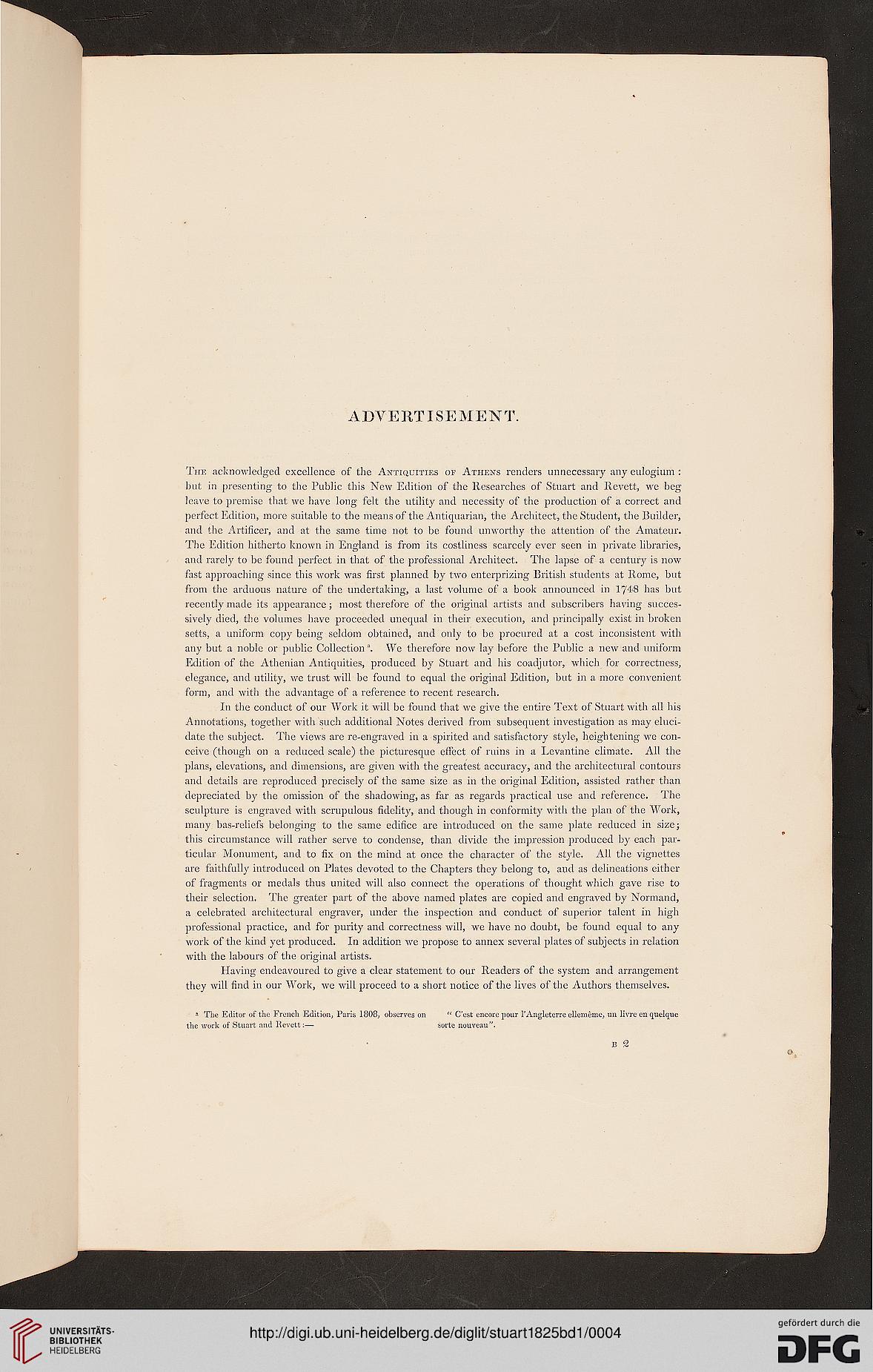 The acknowledged excellence of the Antiquities of Athens renders unnecessary any eulogium :
but in presenting to the Public this New Edition of the Researches of Stuart and Revett, we beg
leave to premise that we have long felt the utility and necessity of the production of a correct and
perfect Edition, more suitable to the means of the Antiquarian, the Architect, the Student, the Builder,
and the Artificer, and at the same time not to be found unworthy the attention of the Amateur.
The Edition hitherto known in England is from its costliness scarcely ever seen in private libraries,
and rarely to be found perfect in that of the professional Architect. The lapse of a century is now
fast approaching since this work was first planned by two enterprizing British students at Rome, but
from the arduous nature of the undertaking, a last volume of a book announced in 1748 has but
recently made its appearance; most therefore of the original artists and subscribers having succes-
sively died, the volumes have proceeded unequal in their execution, and principally exist in broken
setts, a uniform copy being seldom obtained, and only to be procured at a cost inconsistent with
any but a noble or public Collectiona. We therefore now lay before the Public a new and uniform
Edition of the Athenian Antiquities, produced by Stuart and his coadjutor, which for correctness,
elegance, and utility, we trust will be found to equal the original Edition, but in a more convenient
form, and with the advantage of a reference to recent research.

In the conduct of our Work it will be found that we give the entire Text of Stuart with all his
Annotations, together with such additional Notes derived from subsequent investigation as may eluci-
date the subject. The views are re-engraved in a spirited and satisfactory style, heightening we con-
ceive (though on a reduced scale) the picturesque effect of ruins in a Levantine climate. All the
plans, elevations, and dimensions, are given with the greatest accuracy, and the architectural contours
and details are reproduced precisely of the same size as in the original Edition, assisted rather than
depreciated by the omission of the shadowing, as far as regards practical use and reference. The
sculpture is engraved with scrupulous fidelity, and though in conformity with the plan of the Work,
many bas-reliefs belonging to the same edifice are introduced on the same plate reduced in size;
this circumstance will rather serve to condense, than divide the impression produced by each par-
ticular Monument, and to fix on the mind at once the character of the style. All the vignettes
are faithfully introduced on Plates devoted to the Chapters they belong to, and as delineations either
of fragments or medals thus united will also connect the operations of thought which gave rise to
their selection. The greater part of the above named plates are copied and engraved by Normand,
a celebrated architectural engraver, under the inspection and conduct of superior talent in high
professional practice, and for purity and correctness will, we have no doubt, be found equal to any
work of the kind yet produced. In addition we propose to annex several plates of subjects in relation
with the labours of the original artists.

Having endeavoured to give a clear statement to our Readers of the system and arrangement
they will find in our Work, we will proceed to a short notice of the lives of the Authors themselves.

» The Editor of the French Edition, Paris 1808, observes on
the work of Stuart and Revctt:—