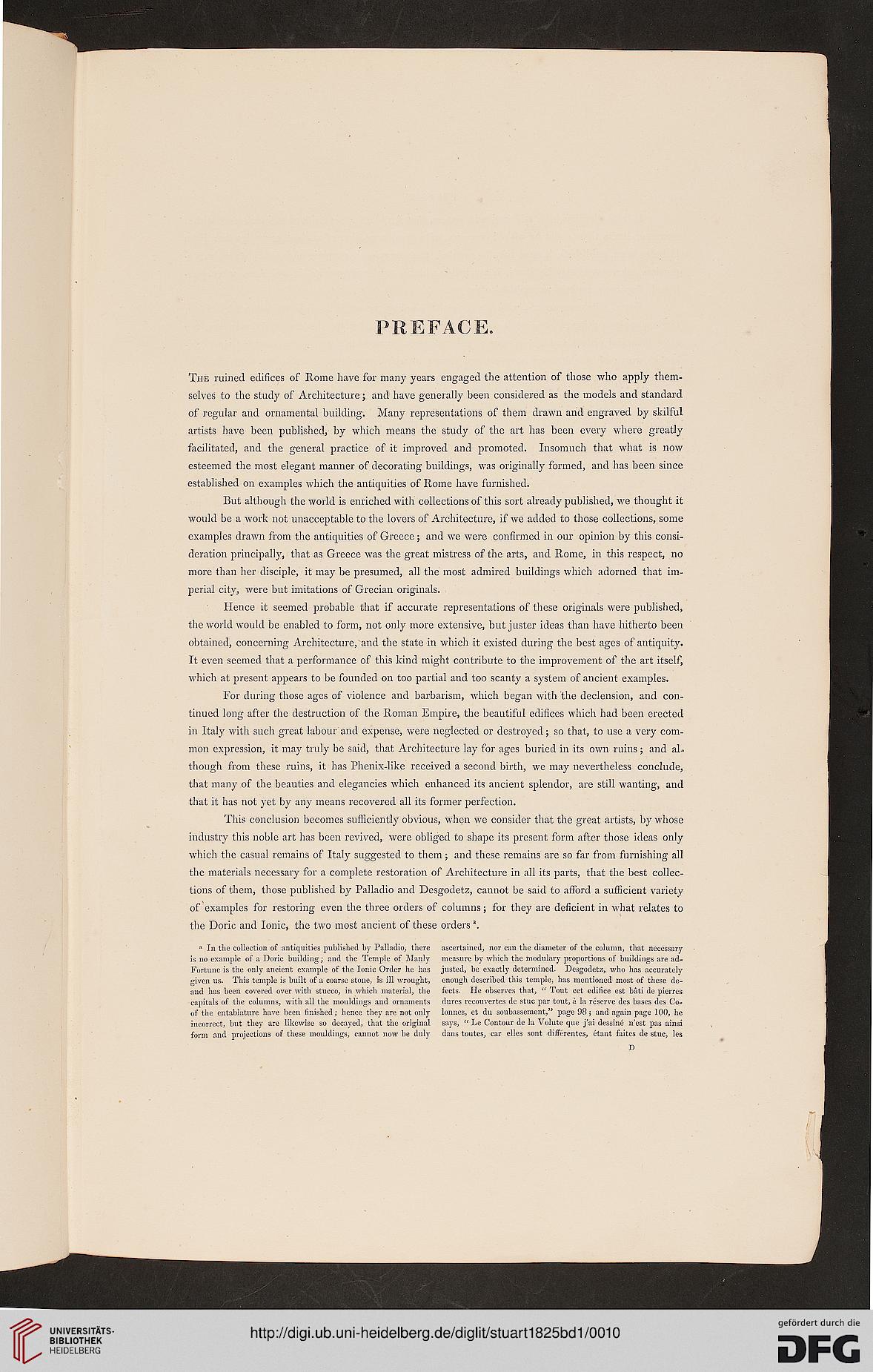 The ruined edifices of Rome have for many years engaged the attention of those who apply them-
selves to the study of Architecture; and have generally been considered as the models and standard
of regular and ornamental building. Many representations of them drawn and engraved by skilful
artists have been published, by which means the study of the art has been every where greatly
facilitated, and the general practice of it improved and promoted. Insomuch that what is now
esteemed the most elegant manner of decorating buildings, was originally formed, and has been since
established on examples which the antiquities of Rome have furnished.

But although the world is enriched with collections of this sort already published, we thought it
would be a work not unacceptable to the lovers of Architecture, if we added to those collections, some
examples drawn from the antiquities of Greece; and we were confirmed in our opinion by this consi-
deration principally, that as Greece was the great mistress of the arts, and Rome, in this respect, no
more than her disciple, it may be presumed, all the most admired buildings which adorned that im-
perial city, were but imitations of Grecian originals.

Hence it seemed probable that if accurate representations of these originals were published,
the world would be enabled to form, not only more extensive, but juster ideas than have hitherto been
obtained, concerning Architecture, and the state in which it existed during the best ages of antiquity.
It even seemed that a performance of this kind might contribute to the improvement of the art itself,
which at present appears to be founded on too partial and too scanty a system of ancient examples.

For during those ages of violence and barbarism, which began with the declension, and con-
tinued long after the destruction of the Roman Empire, the beautiful edifices which had been erected
in Italy with such great labour and expense, were neglected or destroyed; so that, to use a very com-
mon expression, it may truly be said, that Architecture lay for ages buried in its own ruins; and al-
though from these ruins, it has Phenix-like received a second birth, we may nevertheless conclude,
that many of the beauties and elegancies which enhanced its ancient splendor, are still wanting, and
that it has not yet by any means recovered all its former perfection.

This conclusion becomes sufficiently obvious, when we consider that the great artists, by whose
industry this noble art has been revived, were obliged to shape its present form after those ideas only
which the casual remains of Italy suggested to them; and these remains are so far from furnishing all
the materials necessary for a complete restoration of Architecture in all its parts, that the best collec-
tions of them, those published by Palladio and Desgodetz, cannot be said to afford a sufficient variety
of examples for restoring even the three orders of columns; for they are deficient in what relates to
the Doric and Ionic, the two most ancient of these ordersa.

a In tlie collection of antiquities published by Palladio, there ascertained, nor can the diameter of the column, that necessary
is no example of a Doric building; and the Temple of Manly measure by which the modular)' proportions of buildings are ad-
Fortune is the only ancient example of the Ionic Order he has justed, be exactly determined. Desgodetz, who has accurately
given us. This temple is built of a coarse stone, is ill wrought, enough described this temple, has mentioned most of these de-
and has been covered over with stucco, in which material, the fects. He observes that, " Tout cet edifice est bati de pierres
capitals of the columns, with all the mouldings and ornaments dures rccouvertes de stuc par tout, a la reserve des bases des Co-
of the entablature have been finished; hence they are not only lonnes, et du soubassement," page 98; and again page 100, he
incorrect, but they are likewise so decayed, that the original says, " Le Contour de la Volute que j'ai dessine n'est pas ainsi
form and projections of these mouldings, cannot now be duly dans toutes, car ellcs sont differentes, etant faites de stuc, les