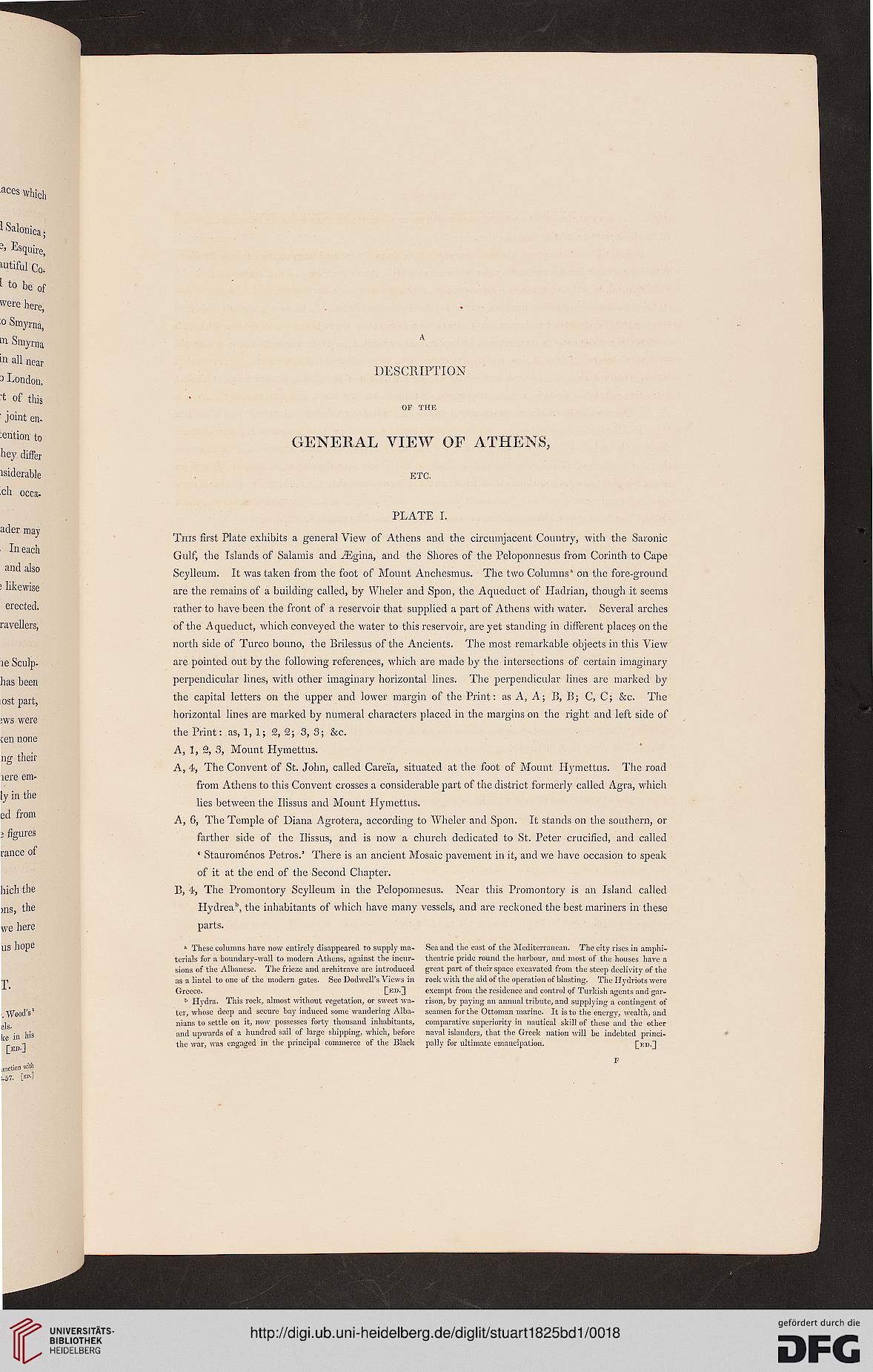 This first Plate exhibits a general View of Athens and the circumjacent Country, with the Saronic
Gulf, the Islands of Salamis and iEgina, and the Shores of the Peloponnesus from Corinth to Cape
Scylleum. It was taken from the foot of Mount Anchesmus. The two Columns3 on the fore-ground
are the remains of a building called, by Wheler and Spon, the Aqueduct of Hadrian, though it seems
rather to have been the front of a reservoir that supplied a part of Athens with water. Several arches
of the Aqueduct, which conveyed the water to this reservoir, are yet standing in different places on the
north side of Turco bouno, the Brilessus of the Ancients. The most remarkable objects in this View
are pointed out by the following references, which are made by the intersections of certain imaginary
perpendicular lines, with other imaginary horizontal lines. The perpendicular lines are marked by
the capital letters on the upper and lower margin of the Print: as A, A; B, B; C, C; &c. The
horizontal lines are marked by numeral characters placed in the margins on the right and left side of
the Print: as, 1, 1; 2, 2; 3, 3; &c.
A, 1, 2, 3, Mount Hymettus.
A, 4, The Convent of St. John, called Careia, situated at the foot of Mount Hymettus. The road

from Athens to this Convent crosses a considerable part of the district formerly called Agra, which

lies between the Ilissus and Mount Hymettus.

A, 6, The Temple of Diana Agrotera, according to Wheler and Spon. It stands on the southern, or

farther side of the Ilissus, and is now a church dedicated to St. Peter crucified, and called
' Stauromenos Petros.' There is an ancient Mosaic pavement in it, and we have occasion to speak
of it at the end of the Second Chapter.

B, 4, The Promontory Scylleum in the Peloponnesus. Near this Promontory is an Island called

Hydrea", the inhabitants of which have many vessels, and are reckoned the best mariners in these
parts.

» These columns have now entirely disappeared to supply ma-
terials for a boundary-wall to modern Athens, against the incur-
sions of the Albanese. The frieze and architrave are introduced
as a lintel to one of the modern gates. See Dodwell's Views in
Greece. I>d.]

b Hydra. This rock, almost without vegetation, or sweet wa-
ter, whose deep and secure bay induced some wandering Alba-
nians to settle on it, now possesses forty thousand inhabitants,
and upwards of a hundred sail of large shipping, which, before
the war, was engaged in the principal commerce of the Black

Sea and the east of the Mediterranean. The city rises in amphi-
theatric pride round the harbour, and most of the houses have a
great part of their space excavated from the steep declivity of the
rock with the aid of the operation of blasting. The Hydriots were
exempt from the residence and control of Turkish agents and gar-
rison, by paying an annual tribute, and supplying a contingent of
seamen for the Ottoman marine. It is to the energy, wealth, and
comparative superiority in nautical skill of these and the other
naval islanders, that the Greek nation will be indebted princi-
pally for ultimate emancipation. LKn-Jl