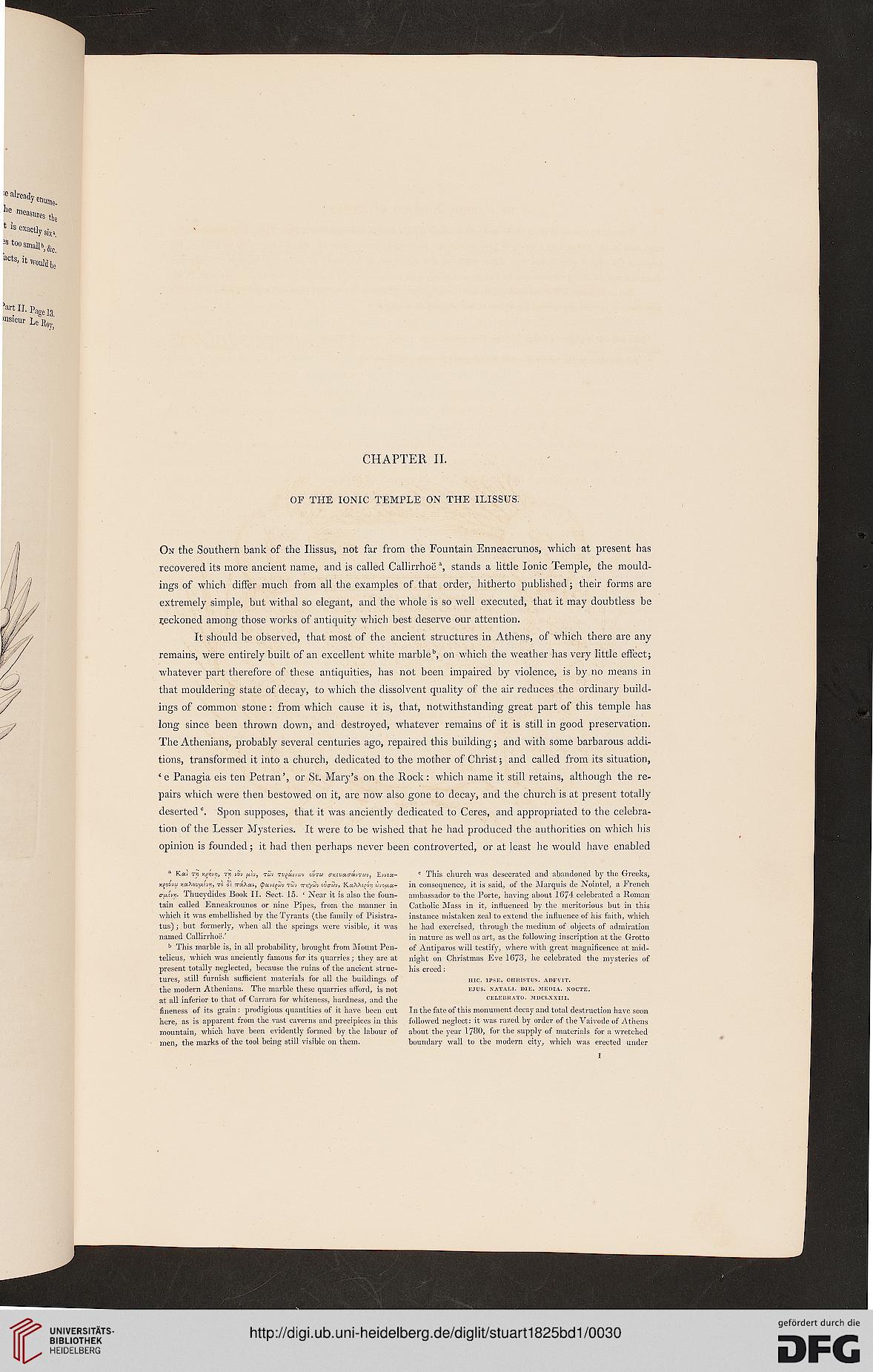 OF THE IONIC TEMPLE ON THE ILISSUS.

On the Southern bank of the Ilissus, not far from the Fountain Enneacrunos, which at present has
recovered its more ancient name, and is called Callirrhoe'a, stands a little Ionic Temple, the mould-
ings of which differ much from all the examples of that order, hitherto published; their forms are
extremely simple, but withal so elegant, and the whole is so well executed, that it may doubtless be
reckoned among those works of antiquity which best deserve our attention.

It should be observed, that most of the ancient structures in Athens, of which there are any
remains, were entirely built of an excellent white marbleb, on which the weather has very little effect;
whatever part therefore of these antiquities, has not been impaired by violence, is by no means in
that mouldering state of decay, to which the dissolvent quality of the air reduces the ordinary build-
ings of common stone: from which cause it is, that, notwithstanding great part of this temple has
long since been thrown down, and destroyed, whatever remains of it is still in good preservation.
The Athenians, probably several centuries ago, repaired this building; and with some barbarous addi-
tions, transformed it into a church, dedicated to the mother of Christ; and called from its situation,
' e Panagia eis ten Petran', or St. Mary's on the Rock: which name it still retains, although the re-
pairs which were then bestowed on it, are now also gone to decay, and the church is at present totally
deserted0. Spon supposes, that it was anciently dedicated to Ceres, and appropriated to the celebra-
tion of the Lesser Mysteries. It were to be wished that he had produced the authorities on which his
opinion is founded; it had then perhaps never been controverted, or at least he would have enabled

b This marble is, in all probability, brought from Mount Pen-
telicus, which was anciently famous for its quarries; they are at
present totally neglected, because the ruins of the ancient struc-
tures, still furnish sufficient materials for all the buildings of
the modern Athenians. The marble these quarries afford, is not
at all inferior to that of Carrara for whiteness, hardness, and the
fineness of its grain: prodigious quantities of it have been cut
here, as is apparent from the vast caverns and precipices in this
mountain, which have been evidently formed by the labour of
men, the marks of the tool being still visible on them.

c This church was desecrated and abandoned by the Greeks,
in consequence, it is said, of the Marquis do Nointel, a French
ambassador to the Porte, having about 1674 celebrated a Roman
Catholic Mass in it, influenced by the meritorious but in this
instance mistaken zeal to extend the influence of his faith, which
he had exercised, through the medium of objects of admiration
in nature as well as art, as the following inscription at the Grotto
of Antiparos will testify, where with great magnificence at mid-
night on Christmas Eve 1673, he celebrated the mysteries of
his creed:

In the fate of this monument decay and total destruction have soon
followed neglect: it was razed by order of the Vaivode of Athens
about the year 1780, for the supply of materials for a wretched
boundary wall to the modern city, which was erected under