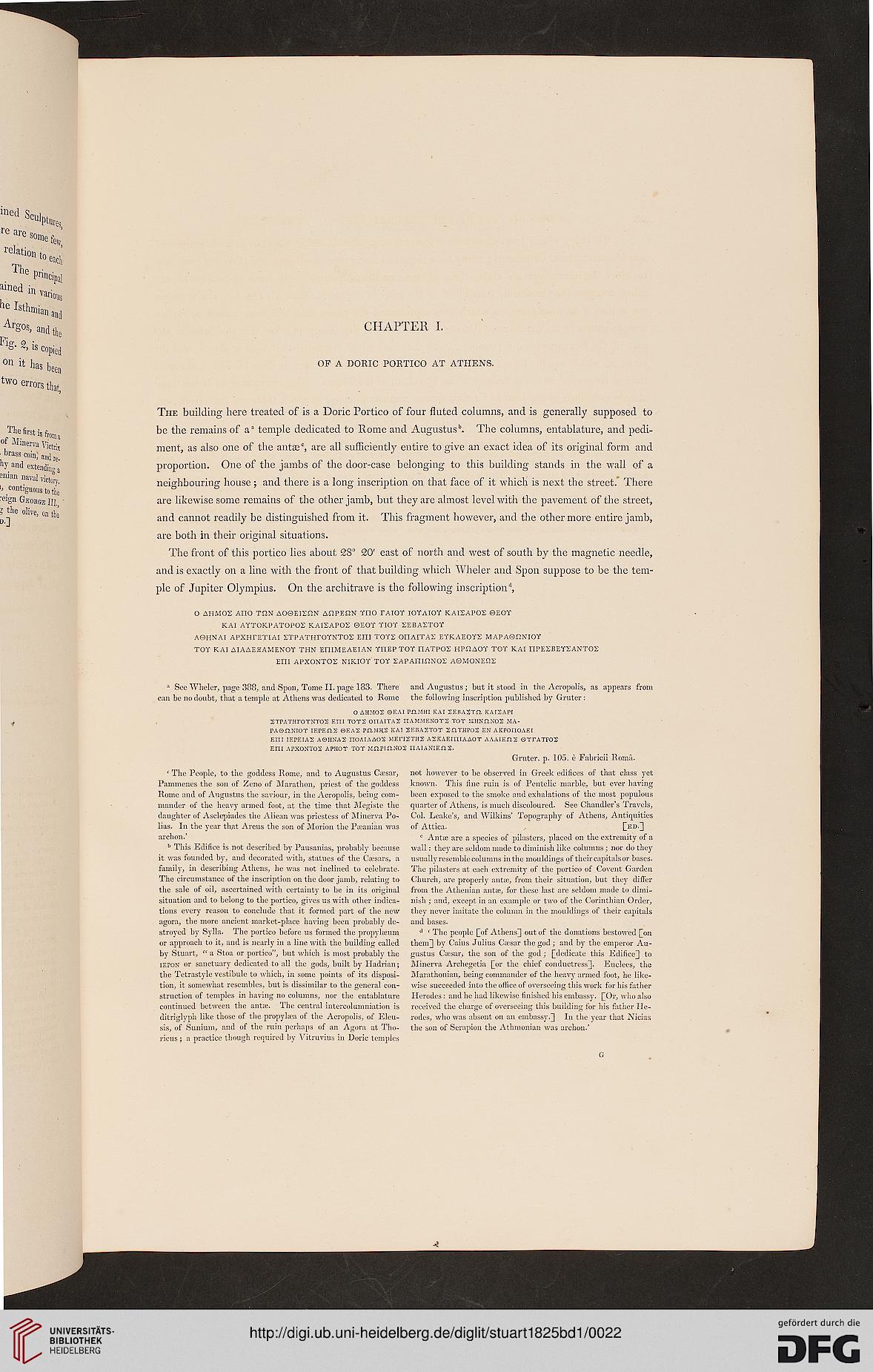 ^rasscoinjandre.
hy and extendi^ a
sman naval vict0I7,
<■> contiguous to the
:eign Geobge III., '
I the olive, on tie

OP A DORIC PORTICO AT ATHENS.

The building here treated of is a Doric Portico of four fluted columns, and is generally supposed to
be the remains of aa temple dedicated to Rome and Augustus6. The columns, entablature, and pedi-
ment, as also one of the anta2c, are all sufficiently entire to give an exact idea of its original form and
proportion. One of the jambs of the door-case belonging to this building stands in the wall of a
neighbouring house; and there is a long inscription on that face of it which is next the street." There
are likewise some remains of the other jamb, but they are almost level with the pavement of the street,
and cannot readily be distinguished from it. This fragment however, and the other more entire jamb,
are both in their original situations.

The front of this portico lies about 28° 20' east of north and west of south by the magnetic needle,
and is exactly on a line with the front of that building which Wheler and Spoil suppose to be the tem-
ple of Jupiter Olympius. On the architrave is the following inscriptiond,

a See Wheler, page 388, and Spon, Tome II. page 183. There
can be no doubt, that a temple at Athens was dedicated to Rome

and Augustus ,• but it stood in the Acropolis,
the following inscription published by Gruter :

' The People, to the goddess Rome, and to Augustus Cresar,
Pammcncs the son of Zeno of Marathon, priest of the goddess
Rome and of Augustus the saviour, in the Acropolis, being com-
mander of the heavy armed foot, at the time that Mcgistc the
daughter of Asclepiades the Aliean was priestess of Minerva Po-
lias. In the year that Areus the son of Morion the Paeanian was
archon.'

b This Edifice is not described by Pausanias, probably because
it was founded by, and decorated with, statues of the Caesars, a
family, in describing Athens, he was not inclined to celebrate.
The circumstance of the inscription on the door jamb, relating to
the sale of oil, ascertained with certainty to be in its original
situation and to belong to the portico, gives us with other indica-
tions every reason to conclude that it formed part of the new
agora, the more ancient market-place having been probably de-
stroyed by Sylla. The portico before us formed the propylaeum
or approach to it, and is nearly in a line with the building called
by Stuart, " a Stoa or portico", but which is most probably the
iepon or sanctuary dedicated to all the gods, built by Hadrian;
the Tetrastyle vestibule to which, in some points of its disposi-
tion, it somewhat resembles, but is dissimilar to the general con-
struction of temples in having no columns, nor the entablature
continued between the antic. The central intcrcolumniation is
ditriglyph like those of the propylaea of the Acropolis, of Eleu-
sis, of Sunium, and of the ruin perhaps of an Agora at Tho-
ricus; a practice though required by Yitruvius in Doric temples

not however to be observed in Greek edifices of that class yet
known. This fine ruin is of Pentelic marble, but ever having
been exposed to the smoke and exhalations of the most pojmlous
quarter of Athens, is much discoloured. See Chandler's Travels,
Col. Leake's, and Wilkins' Topography of Athens, Antiquities
of Attica. [bd.]

c Antse are a species of pilasters, placed on the extremity of a
wall: they are seldom made to diminish like columns; nor do they
usually resemble columns in the mouldings of their capitals or bases.
The pilasters at each extremity of the portico of Covent Garden
Church, are properly antte, from their situation, but they differ
from the Athenian antae, for these last are seldom made to dimi-
nish ; and, except in an example or two of the Corinthian Order,
they never imitate the column in the mouldings of their capitals
and bases.

d ( The people f_of Athens] out of the donations bestowed \jm
them] by Cains Julius Ca;sar the god; and by the emperor Au-
gustus Caesar, the son of the god; [^dedicate this Edifice] to
Minerva Archegetia f_or the chief conductress]. Euclees, the
Marathonian, being commander of the heavy armed foot, he like-
wise succeeded into the office of overseeing this work for his father
Herodcs: and he had likewise finished his embassy. \X)r, who also
received the charge of overseeing this building for his father Ile-
rodes, who was absont on an embassy.] In the year that Nicias
the son of Serapion the Athmonian was archon.'