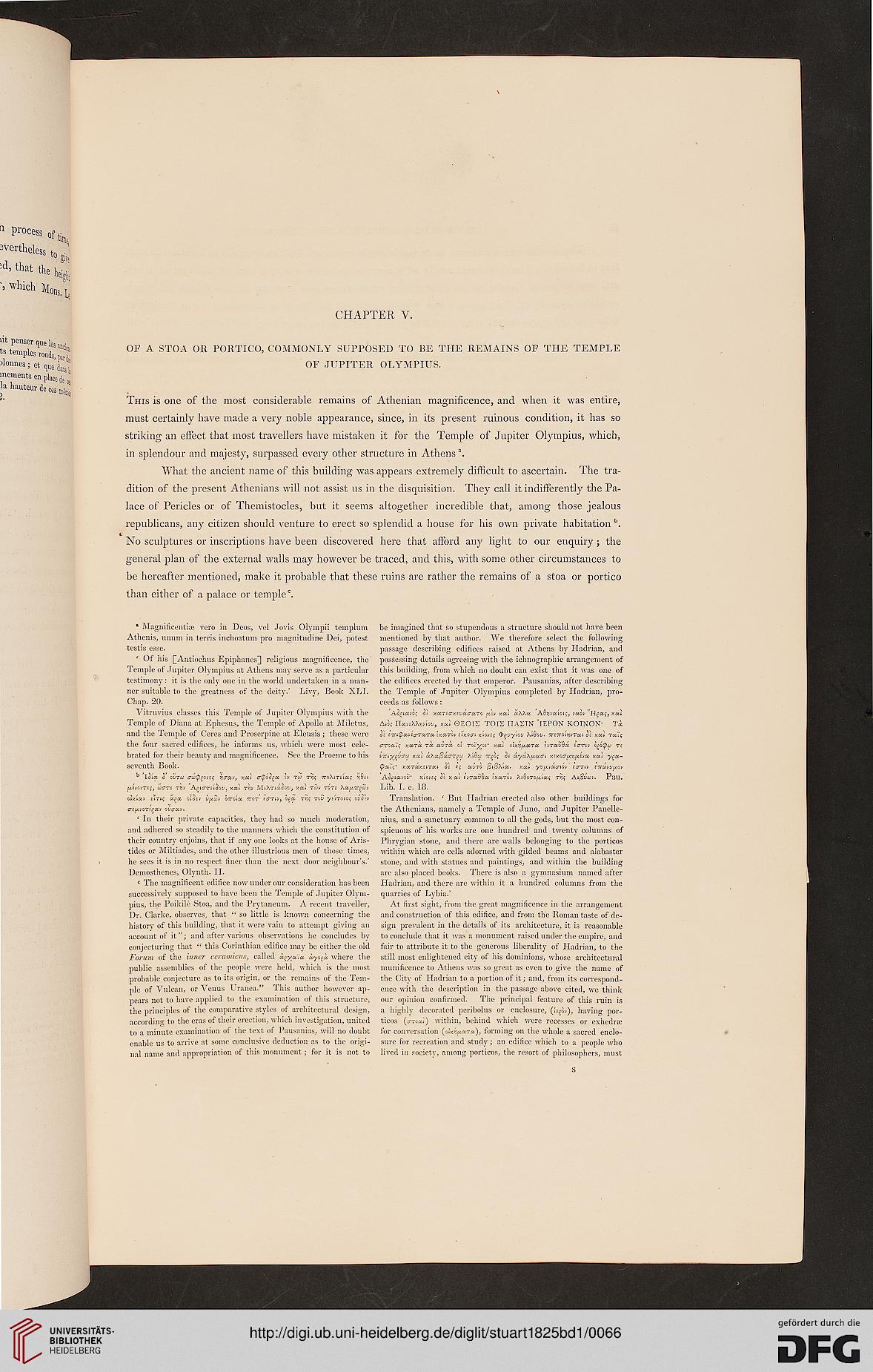 Information about OCR text
1 Process of ^

OF A STOA OR PORTICO, COMMONLY SUPPOSED TO BE THE REMAINS OF THE TEMPLE

This is one of the most considerable remains of Athenian magnificence, and when it was entire,
must certainly have made a very noble appearance, since, in its present ruinous condition, it has so
striking an effect that most travellers have mistaken it for the Temple of Jupiter Olympius, which,
in splendour and majesty, surpassed every other structure in Athens'.

What the ancient name of this building was appears extremely difficult to ascertain. The tra-
dition of the present Athenians will not assist us in the disquisition. They call it indifferently the Pa-
lace of Pericles or of Themistocles, but it seems altogether incredible that, among those jealous
republicans, any citizen should venture to erect so splendid a house for his own private habitation h.
No sculptures or inscriptions have been discovered here that afford any light to our enquiry; the
general plan of the external walls may however be traced, and this, with some other circumstances to
be hereafter mentioned, make it probable that these ruins are rather the remains of a stoa or portico
than either of a palace or templec.

' Of his nAntiochus Epiphanes] religious magnificence, the'
Temple of Jupiter Olympius at Athens may serve as a particular
testimony: it is the only one in the world undertaken in a man-
ner suitahle to the greatness of the deity.' Livy, Book XLI.
Chap. 20.

Vitruvius classes this Temple of Jupiter Olympius with the
Temple of Diana at Ephesus, the Temple of Apollo at Miletus,
and the Temple of Ceres and Proserpine at Eleusis; these were
the four sacred edifices, he informs us, which were most cele-
brated for their beauty and magnificence. See the Proeme to his
seventh Book.

' In their private capacities, they had so much moderation,
and adhered so steadily to the manners which the constitution of
their country enjoins, that if any one looks at the house of Aris-
tides or Jliltiades, and the other illustrious men of those times,
he sees it is in no respect finer than the next door neighbour's.'
Demosthenes, Olynth. II.

c The magnificent edifice now under our consideration has been
successively supposed to have been the Temple of Jupiter Olym-
pius, the Poikile Stoa, and the Prytaneum. A recent traveller,
Dr. Clarke, observes, that " so little is known concerning the
history of this building, that it were vain to attempt giving an
account of it"; and after various observations he concludes by
conjecturing that " this Corinthian edifice may be either the old
Forum of the inner ceramicus, called apya'ia ayoca. where the
public assemblies of the people were held, which is the most
probable conjecture as to its origin, or the remains of the Tem-
ple of Vulcan, or Venus Uranea." This author however ap-
pears not to have applied to the examination of this structure,
the principles of the comparative styles of architectural design,
according to the eras of their erection, which investigation, united
to a minute examination of the text of Pausanias, will no doubt
enable us to arrive at some conclusive deduction as to the origi-
nal name and appropriation of this monument ; for it is not to

be imagined that so stupendous a structure should not have been
mentioned by that author. We therefore select the following
passage describing edifices raised at Athens by Hadrian, and
possessing details agreeing with the ichnographic arrangement of
this building, from which no doubt can exist that it was one of
the edifices erected by that emperor. Pausauias, after describing
the Temple of Jupiter Olympius completed by Hadrian, pro-
ceeds as follows:

Translation. ' But Hadrian erected also other buildings for
the Athenians, namely a Temple of Juno, and Jupiter Panelle-
nius, and a sanctuary common to all the gods, but the most con-
spicuous of his works are one hundred and twenty columns of
Phrygian stone, and there are walls belonging to the porticos
within which are cells adorned with gilded beams and alabaster
stone, and with statues and paintings, and within the building
are also placed books. There is also a gymnasium named after
Hadrian, and there are within it a hundred columns from the
quarries of Lybia.'

At first sight, from the great magnificence in the arrangement
and construction of this edifice, and from the Roman taste of de-
sign prevalent in the details of its architecture, it is reasonable
to conclude that it was a monument raised under the empire, and
fair to attribute it to the generous liberality of Hadrian, to the
still most enlightened city of his dominions, whose architectural
munificence to Athens was so great as even to give the name of
the City of Hadrian to a portion of it; and, from its correspond-
ence with the description in the passage above cited, we think
our opinion confirmed. The principal feature of this ruin is
a highly decorated peribolus or enclosure, (Uplv), having por-
ticos (c-roai) within, behind which were recesses or exhedrse
for conversation (o«^4»;t«), forming on the whole a sacred enclo-
sure for recreation and study; an edifice which to a people who
lived in society, among porticos, the resort of philosophers, must