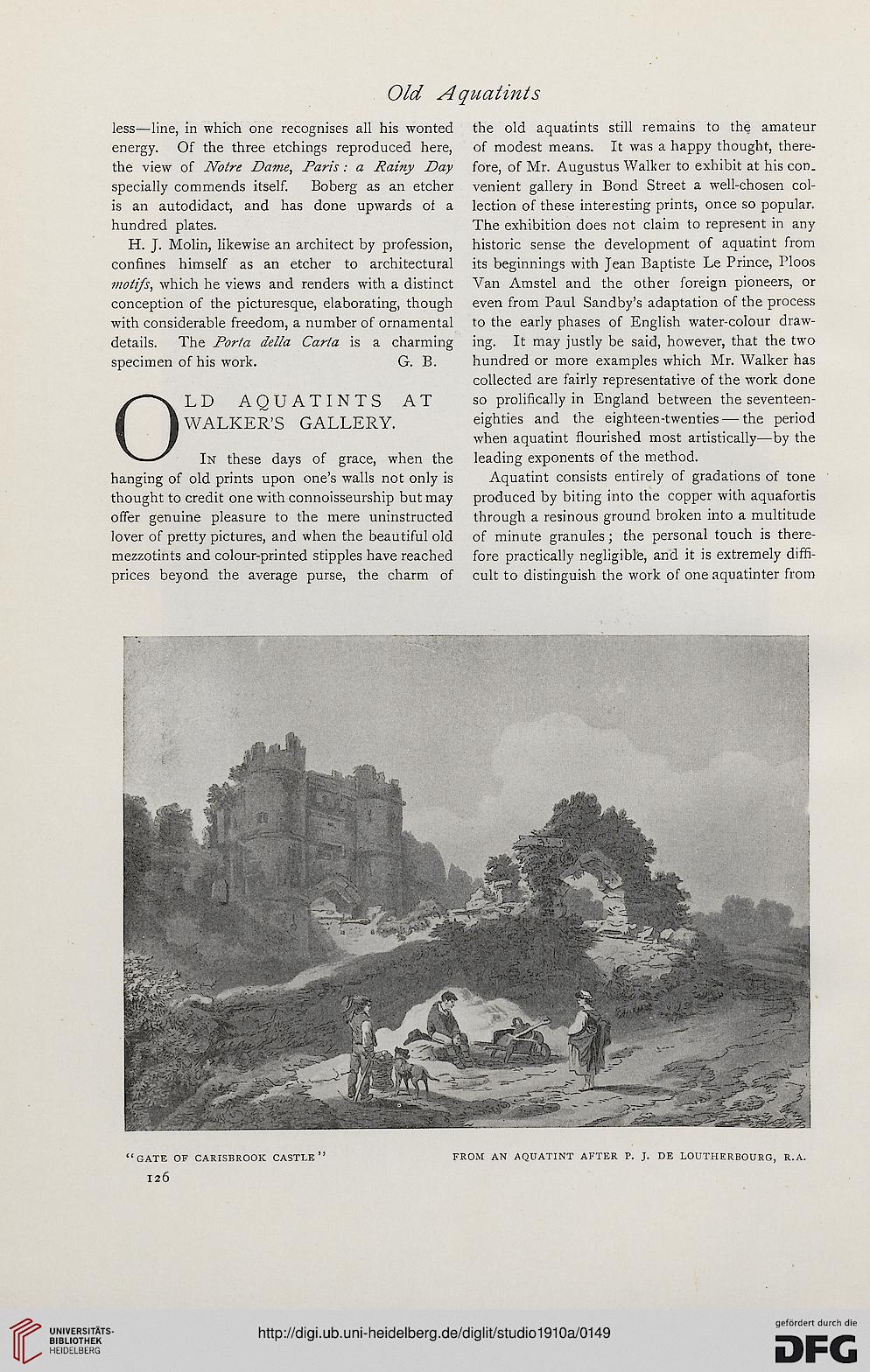 less—line, in which one recognises all his wonted
energy. Of the three etchings reproduced here,
the view of Notre Dame, Paris: a Rainy Day
specially commends itself. Boberg as an etcher
is an autodidact, and has done upwards of a
hundred plates.

H. J. Molin, likewise an architect by profession,
confines himself as an etcher to architectural
motifs, which he views and renders with a distinct
conception of the picturesque, elaborating, though
with considerable freedom, a number of ornamental
details. The Porta della Carta is a charming
specimen of his work. G. B.

In these days of grace, when the
hanging of old prints upon one’s walls not only is
thought to credit one with connoisseurship but may
offer genuine pleasure to the mere uninstructed
lover of pretty pictures, and when the beautiful old
mezzotints and colour-printed stipples have reached
prices beyond the average purse, the charm of

the old aquatints still remains to the amateur
of modest means. It was a happy thought, there-
fore, of Mr. Augustus Walker to exhibit at his con.
venient gallery in Bond Street a well-chosen col-
lection of these interesting prints, once so popular.
The exhibition does not claim to represent in any
historic sense the development of aquatint from
its beginnings with Jean Baptiste Le Prince, Ploos
Van Amstel and the other foreign pioneers, or
even from Paul Sandby’s adaptation of the process
to the early phases of English water-colour draw-
ing. It may justly be said, however, that the two
hundred or more examples which Mr. Walker has
collected are fairly representative of the work done
so prolifically in England between the seventeen-
eighties and the eighteen-twenties—the period
when aquatint flourished most artistically—by the
leading exponents of the method.

Aquatint consists entirely of gradations of tone
produced by biting into the copper with aquafortis
through a resinous ground broken into a multitude
of minute granules; the personal touch is there-
fore practically negligible, and it is extremely diffi-
cult to distinguish the work of one aquatinter from

FROM AN AQUATINT AFTER P. J. DE LOUTHERBOURG, R.A.