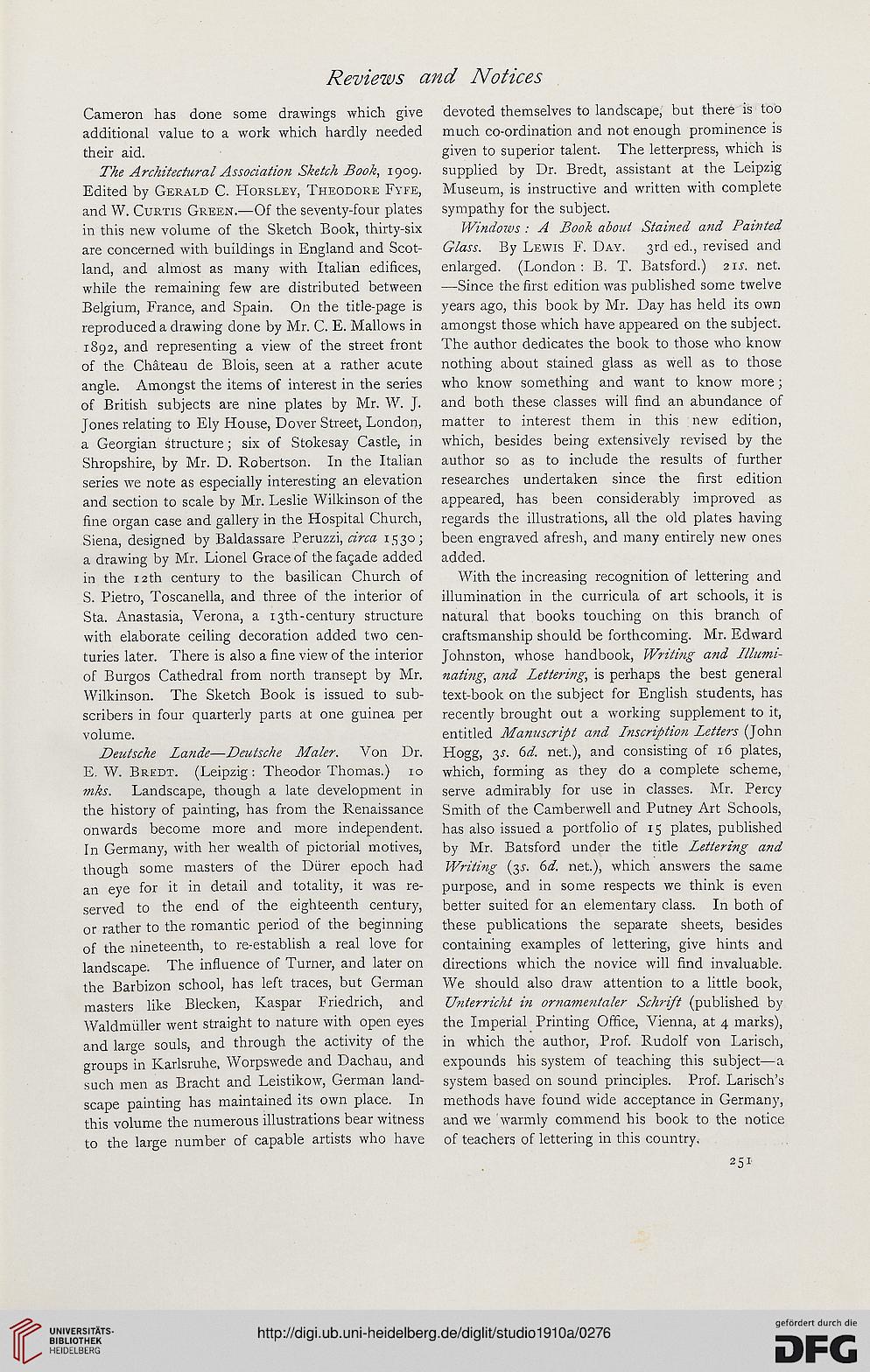 Cameron has done some drawings which give
additional value to a work which hardly needed
their aid.

The Architectural Association Sketch Book, 1909.
Edited by Gerald C. Horsley, Theodore Fyfe,
and W. Curtis Green.—Of the seventy-four plates
in this new volume of the Sketch Book, thirty-six
are concerned with buildings in England and Scot-
land, and almost as many with Italian edifices,
while the remaining few are distributed between
Belgium, France, and Spain. On the title-page is
reproduced a drawing done by Mr. C. E. Mallows in
1892, and representing a view of the street front
of the Chateau de Blois, seen at a rather acute
angle. Amongst the items of interest in the series
of British subjects are nine plates by Mr. W. J.
Jones relating to Ely House, Dover Street, London,
a Georgian structure; six of Stokesay Castle, in
Shropshire, by Mr. D. Robertson. In the Italian
series we note as especially interesting an elevation
and section to scale by Mr. Leslie Wilkinson of the
fine organ case and gallery in the Hospital Church,
Siena, designed by Baldassare Peruzzi, circa 1530;
a drawing by Mr. Lionel Grace of the fagade added
in the 12th century to the basilican Church of
S. Pietro, Toscanella, and three of the interior of
Sta. Anastasia, Verona, a 13th-century structure
with elaborate ceiling decoration added two cen-
turies later. There is also a fine view of the interior
of Burgos Cathedral from north transept by Mr.
Wilkinson. The Sketch Book is issued to sub-
scribers in four quarterly parts at one guinea per
volume.

Deutsche Lande—Deutsche Maler. Von Dr.
E. W. Bredt. (Leipzig: Theodor Thomas.) 10
mks. Landscape, though a late development in
the history of painting, has from the Renaissance
onwards become more and more independent.
In Germany, with her wealth of pictorial motives,
though some masters of the Diirer epoch had
an eye for it in detail and totality, it was re-
served to the end of the eighteenth century,
or rather to the romantic period of the beginning
of the nineteenth, to re-establish a real love for
landscape. The influence of Turner, and later on
the Barbizon school, has left traces, but German
masters like Blecken, Kaspar Friedrich, and
Waldmiiller went straight to nature with open eyes
and large souls, and through the activity of the
groups in Karlsruhe, Worpswede and Dachau, and
such men as Bracht and Leistikow, German land-
scape painting has maintained its own place. In
this volume the numerous illustrations bear witness
to the large number of capable artists who have

devoted themselves to landscape, but there is too
much co-ordination and not enough prominence is
given to superior talent. The letterpress, which is
supplied by Dr. Bredt, assistant at the Leipzig
Museum, is instructive and written with complete
sympathy for the subject.

Windows : A Book about Stained and Painted
Glass. By Lewis F. Day. 3rd ed., revised and
enlarged. (London : B. T. Batsford.) 21s. net.
—Since the first edition was published some twelve
years ago, this book by Mr. Day has held its own
amongst those which have appeared on the subject.
The author dedicates the book to those who know
nothing about stained glass as well as to those
who know something and want to know more;
and both these classes will find an abundance of
matter to interest them in this new edition,
which, besides being extensively revised by the
author so as to include the results of further
researches undertaken since the first edition
appeared, has been considerably improved as
regards the illustrations, all the old plates having
been engraved afresh, and many entirely new ones
added.

With the increasing recognition of lettering and
illumination in the curricula of art schools, it is
natural that books touching on this branch of
craftsmanship should be forthcoming. Mr. Edward
Johnston, whose handbook, Writing and Illumi-
nating, and Lettering, is perhaps the best general
text-book on the subject for English students, has
recently brought out a working supplement to it,
entitled Manuscript and Inscriptio7i Letters (John
Hogg, 3-r. 6d. net.), and consisting of 16 plates,
which, forming as they do a complete scheme,
serve admirably for use in classes. Mr. Percy
Smith of the Camberwell and Putney Art Schools,
has also issued a portfolio of 15 plates, published
by Mr. Batsford under the title Lettering and
Writing (3.f. 6d. net.), which answers the same
purpose, and in some respects we think is even
better suited for an elementary class. In both of
these publications the separate sheets, besides
containing examples of lettering, give hints and
directions which the novice will find invaluable.
We should also draw attention to a little book,
Unterricht iti ortiamentaler Schrift (published by
the Imperial Printing Office, Vienna, at 4 marks),
in which the author, Prof. Rudolf von Larisch,
expounds his system of teaching this subject—a
system based on sound principles. Prof. Larisch’s
methods have found wide acceptance in Germany,
and we warmly commend his book to the notice
of teachers of lettering in this country.