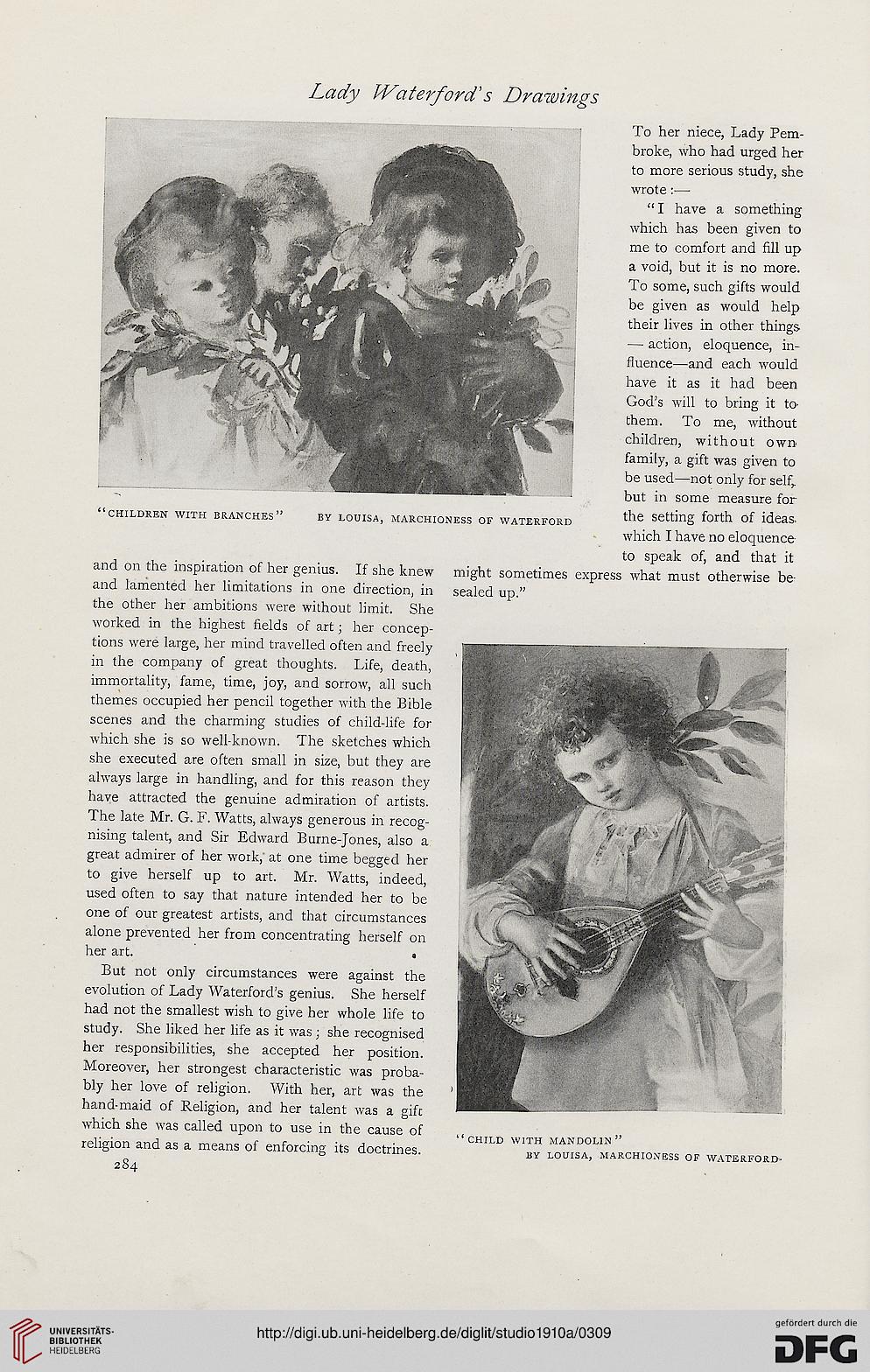 and on the inspiration of her genius. If she knew
and lamented her limitations in one direction, in
the other her ambitions were without limit. She
worked in the highest fields of art; her concep-
tions were large, her mind travelled often and freely
in the company of great thoughts. Life, death,
immortality, fame, time, joy, and sorrow, all such
themes occupied her pencil together with the Bible
scenes and the charming studies of child-life for
which she is so well-known. The sketches which
she executed are often small in size, but they are
always large in handling, and for this reason they
have attracted the genuine admiration of artists.
The late Mr. G. F. Watts, always generous in recog-
nising talent, and Sir Edward Burne-Jones, also a
great admirer of her work, at one time begged her
to give herself up to art. Mr. Watts, indeed,
used often to say that nature intended her to be
one of our greatest artists, and that circumstances
alone prevented her from concentrating herself on
her art. •

But not only circumstances were against the
evolution of Lady Waterford’s genius. She herself
had not the smallest wish to give her whole life to
study. She liked her life as it was; she recognised
her responsibilities, she accepted her position.
Moreover, her strongest characteristic was proba-
bly her love of religion. With her, art was the
hand-maid of Religion, and her talent was a gift
which she was called upon to use in the cause of
religion and as a means of enforcing its doctrines.

To her niece, Lady Pem-
broke, who had urged her
to more serious study, she
wrote:—

“ I have a something
which has been given to
me to comfort and fill up
a void, but it is no more.
To some, such gifts would
be given as would help
their lives in other things
— action, eloquence, in-
fluence—and each would
have it as it had been
God’s will to bring it to-
them. To me, without
children, without own
family, a gift was given to
be used—not only for self,,
but in some measure for
the setting forth of ideas,
which I have no eloquence
to speak of, and that it
might sometimes express what must otherwise be
sealed up.”

BY LOUISA, MARCHIONESS OF WATERFORD-

BY LOUISA, MARCHIONESS OF WATERFORD