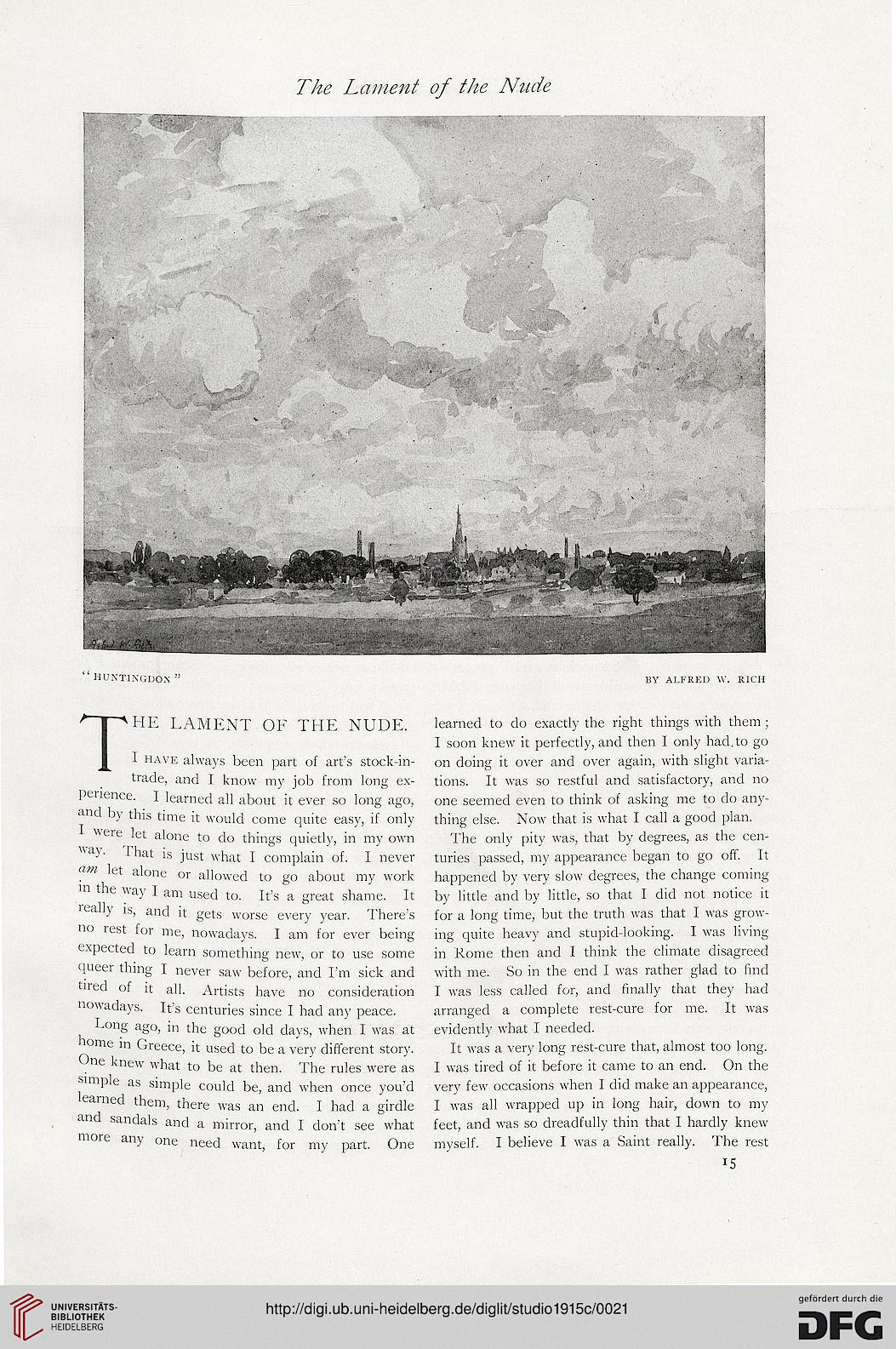 Information about OCR text
The Lament of the Nude

The lament of the nude.

I have always been part of art’s stock-in-
trade, and I know my job from long ex-
perience. I learned all about it ever so long ago,
and by this time it would come quite easy, if only
I were let alone to do things quietly, in my own
way. That is just what I complain of. I never
am let alone or allowed to go about my work
in the way I am used to. It’s a great shame. It
really is, and it gets worse every year. Iheres
no rest for me, nowadays. I am for ever being
expected to learn something new, or to use some
queer thing I never saw before, and I’m sick and
tired of it all. Artists have no consideration

nowadays. It’s centuries since I had any peace.

Long ago, in the good old days, when I was at
home in Greece, it used to be a very different stor).
One knew what to be at then. The rules were as
simple as simple could be, and when once you d
learned them, there was an end. I had a girdle
and sandals and a mirror, and I don’t see what
more any one need want, for my part. One

learned to do exactly the right things with them;

I soon knew it perfectly, and then I only had,to go
on doing it over and over again, with slight varia-
tions. It was so restful and satisfactory, and no
one seemed even to think of asking me to do any-
thing else. Now that is what I call a good plan.

The only pity was, that by degrees, as the cen-
turies passed, my appearance began to go off. It
happened by very slow degrees, the change coming
by little and by little, so that I did not notice it
for a long time, but the truth was that I was grow-
ing quite heavy and stupid-looking. I was living
in Rome then and I think the climate disagreed
with me. So in the end I was rather glad to find
I was less called for, and finally that they had
arranged a complete rest-cure for me. It was
evidently what I needed.

It was a very long rest-cure that, almost too long.
I was tired of it before it came to an end. On the
very few occasions when I did make an appearance,
I was all wrapped up in long hair, down to my
feet, and was so dreadfully thin that I hardly knew
myself. I believe I was a Saint really. The rest