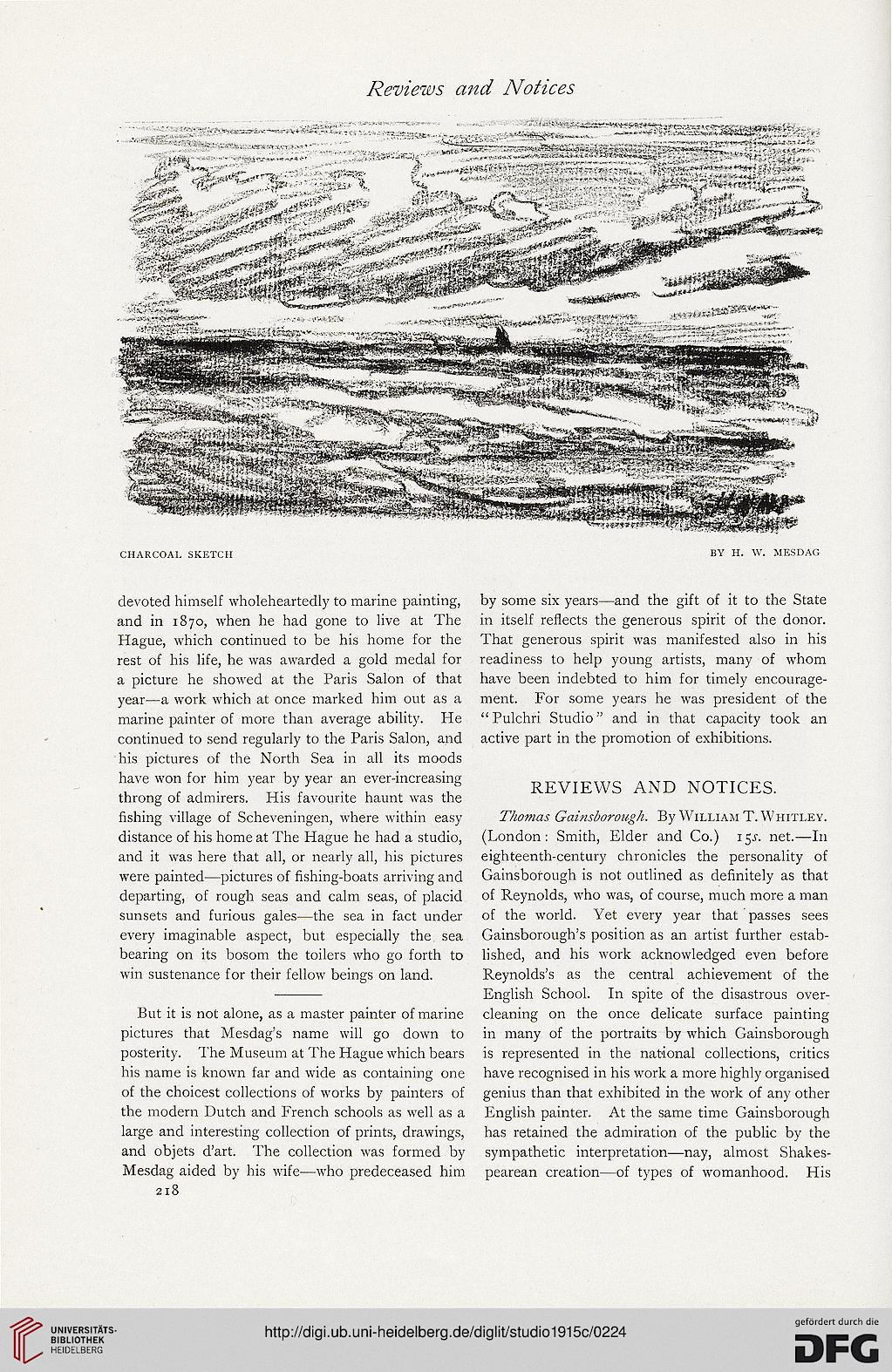 devoted himself wholeheartedly to marine painting,
and in 1870, when he had gone to live at The
Hague, which continued to be his home for the
rest of his life, he was awarded a gold medal for
a picture he showed at the Paris Salon of that
year—a work which at once marked him out as a
marine painter of more than average ability. He
continued to send regularly to the Paris Salon, and
his pictures of the North Sea in all its moods
have won for him year by year an ever-increasing
throng of admirers. His favourite haunt was the
fishing village of Scheveningen, where within easy
distance of his home at The Hague he had a studio,
and it was here that all, or nearly all, his pictures
were painted—pictures of fishing-boats arriving and
departing, of rough seas and calm seas, of placid
sunsets and furious gales—the sea in fact under
every imaginable aspect, but especially the sea
bearing on its bosom the toilers who go forth to
win sustenance for their fellow beings on land.

But it is not alone, as a master painter of marine
pictures that Mesdag’s name will go down to
posterity. The Museum at The Hague which bears
his name is known far and wide as containing one
of the choicest collections of works by painters of
the modern Dutch and French schools as well as a
large and interesting collection of prints, drawings,
and objets d’art. The collection was formed by
Mesdag aided by his wife—who predeceased him

by some six years—and the gift of it to the State
in itself reflects the generous spirit of the donor.
That generous spirit was manifested also in his
readiness to help young artists, many of whom
have been indebted to him for timely encourage-
ment. For some years he was president of the
“Pulchri Studio” and in that capacity took an
active part in the promotion of exhibitions.

Thomas Gainsborough. By William T. Whitley.
(London: Smith, Elder and Co.) 155. net.—In
eighteenth-century chronicles the personality of
Gainsborough is not outlined as definitely as that
of Reynolds, who was, of course, much more a man
of the world. Yet every year that passes sees
Gainsborough’s position as an artist further estab-
lished, and his work acknowledged even before
Reynolds’s as the central achievement of the
English School. In spite of the disastrous over-
cleaning on the once delicate surface painting
in many of the portraits by which Gainsborough
is represented in the national collections, critics
have recognised in his work a more highly organised
genius than that exhibited in the work of any other
English painter. At the same time Gainsborough
has retained the admiration of the public by the
sympathetic interpretation—nay, almost Shakes-
pearean creation—of types of womanhood. His