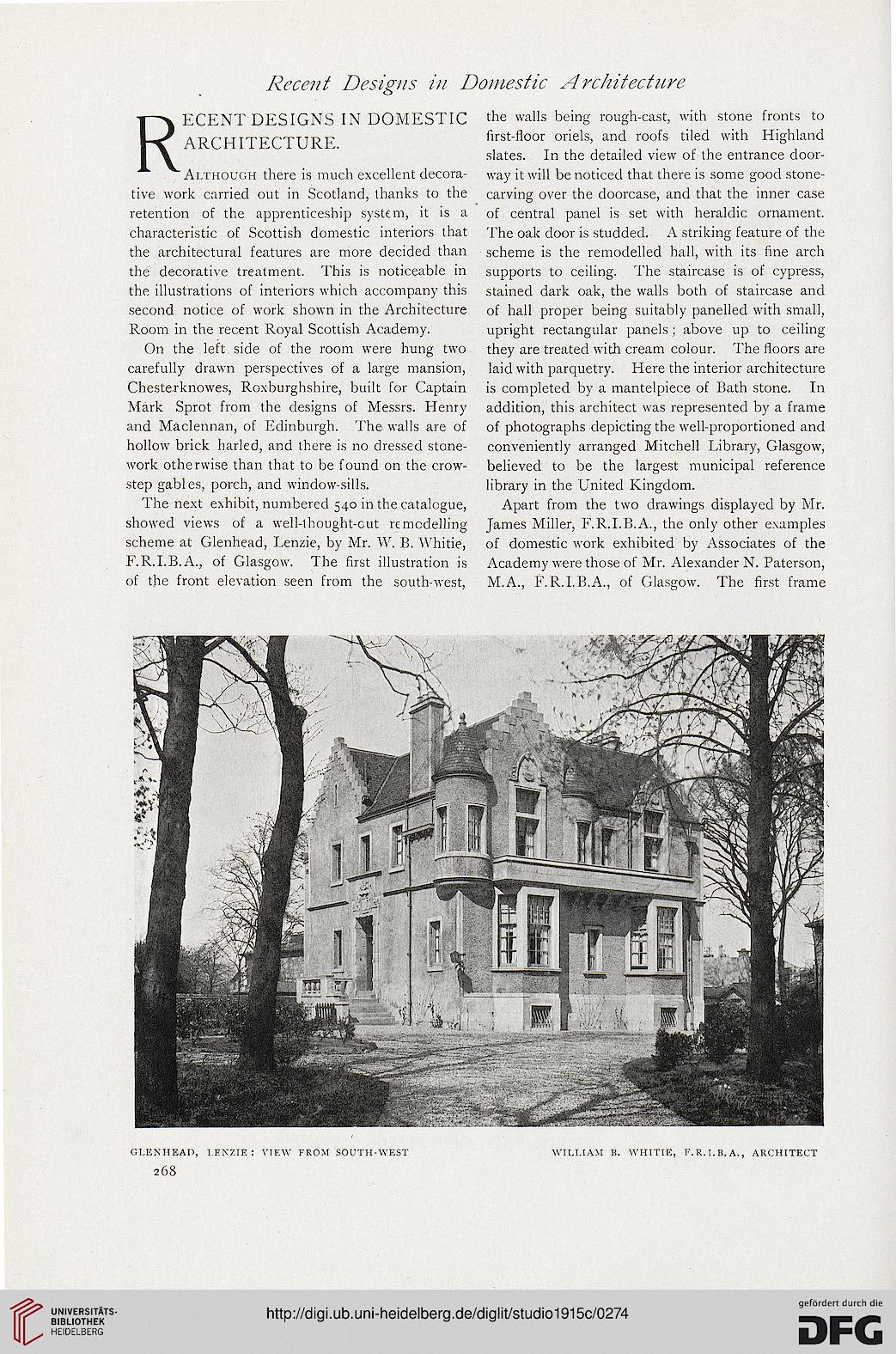 'Although there is much excellent decora-
tive work carried out in Scotland, thanks to the
retention of the apprenticeship system, it is a
characteristic of Scottish domestic interiors that
the architectural features are more decided than
the decorative treatment. This is noticeable in
the illustrations of interiors which accompany this
second notice of work shown in the Architecture
Room in the recent Royal Scottish Academy.

On the left side of the room were hung two
carefully drawn perspectives of a large mansion,
Cheste.rknowes, Roxburghshire, built for Captain
Mark Sprot from the designs of Messrs. Henry
and Maclennan, of Edinburgh. The walls are of
hollow brick barled, and there is no dressed stone-
work otherwise than that to be found on the crow-
step gables, porch, and window-sills.

The next exhibit, numbered 540 in the catalogue,
showed views of a well-thought-cut remodelling
scheme at Glenhead, Lenzie, by Mr. W. B. Whitie,
F.R.I.B.A., of Glasgow. The first illustration is
of the front elevation seen from the south-west,

the walls being rough-cast, with stone fronts to
first-floor oriels, and roofs tiled with Highland
slates. In the detailed view of the entrance door-
way it will be noticed that there is some good stone-
carving over the doorcase, and that the inner case
of central panel is set with heraldic ornament.
The oak door is studded. A striking feature of the
scheme is the remodelled hall, with its fine arch
supports to ceiling. The staircase is of cypress,
stained dark oak, the walls both of staircase and
of hall proper being suitably panelled with small,
upright rectangular panels; above up to ceiling
they are treated with cream colour. The floors are
laid with parquetry. Here the interior architecture
is completed by a mantelpiece of Bath stone. In
addition, this architect was represented by a frame
of photographs depicting the well-proportioned and
conveniently arranged Mitchell Library, Glasgow,
believed to be the largest municipal reference
library in the United Kingdom.

Apart from the two drawings displayed by Mr.
James Miller, F.R.I.B.A., the only other examples
of domestic work exhibited by Associates of the
Academy were those of Mr. Alexander N. Paterson,
M.A., F.R.I.B.A., of Glasgow. The first frame