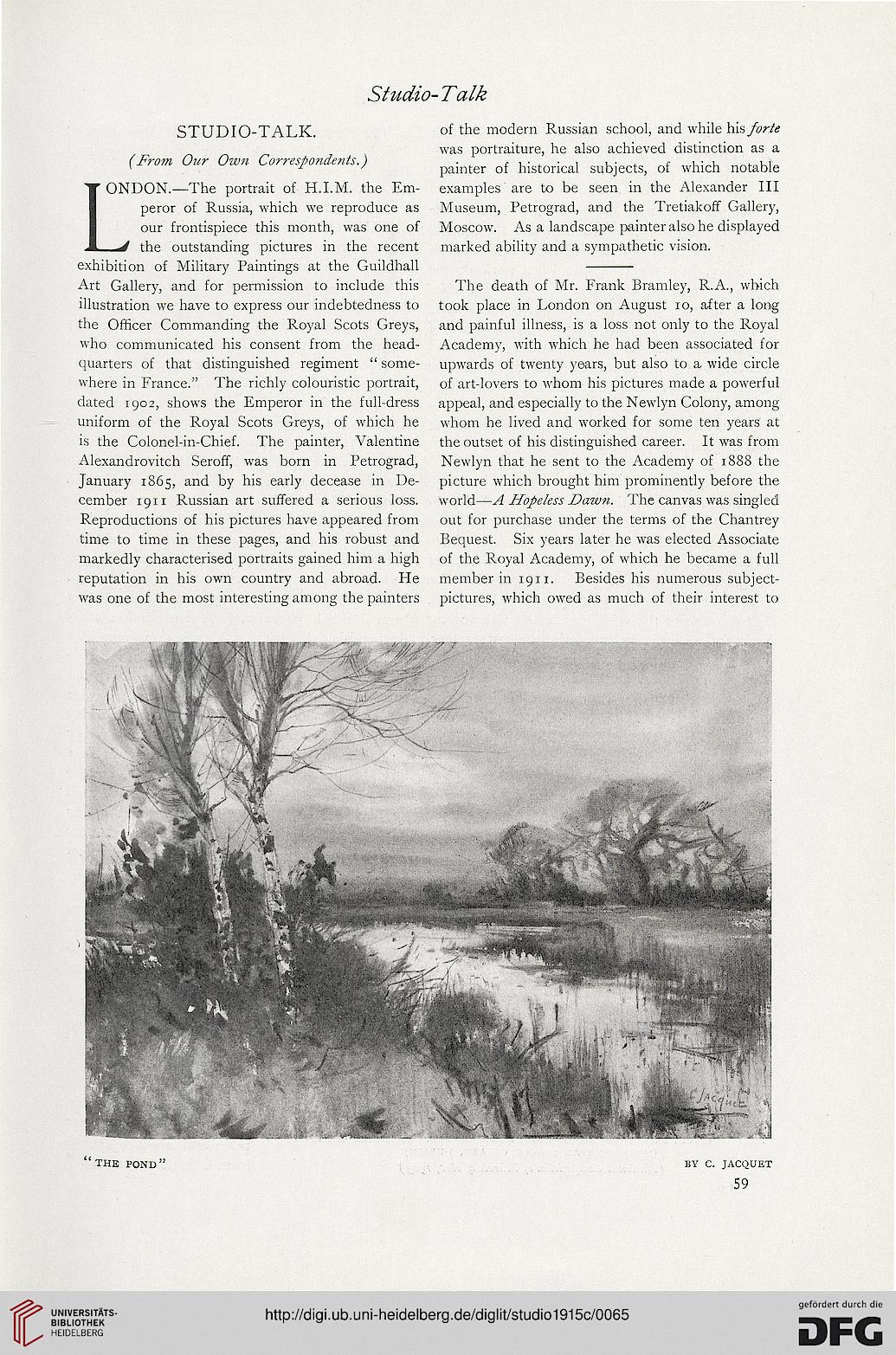 EDON.—The portrait of H.I.M. the Em-
peror of Russia, which we reproduce as
our frontispiece this month, was one of
the outstanding pictures in the recent
exhibition of Military Paintings at the Guildhall
Art Gallery, and for permission to include this
illustration we have to express our indebtedness to
the Officer Commanding the Royal Scots Greys,
who communicated his consent from the head-
quarters of that distinguished regiment “ some-
where in France.” The richly colouristic portrait,
dated 1902, shows the Emperor in the full-dress
uniform of the Royal Scots Greys, of which he
is the Colonel-in-Chief. The painter, Valentine
Alexandrovitch Seroff, was born in Petrograd,
January 1865, and by his early decease in De-
cember 1911 Russian art suffered a serious loss.
Reproductions of his pictures have appeared from
time to time in these pages, and his robust and
markedly characterised portraits gained him a high
reputation in his own country and abroad. He
was one of the most interesting among the painters

of the modern Russian school, and while his forte
was portraiture, he also achieved distinction as a
painter of historical subjects, of which notable
examples are to be seen in the Alexander III
Museum, Petrograd, and the Tretiakoff Gallery,
Moscow. As a landscape painter also he displayed
marked ability and a sympathetic vision.

The death of Mr. Frank Bramley, R.A., which
took place in London on August 10, after a long
and painful illness, is a loss not only to the Royal
Academy, with which he had been associated for
upwards of twenty years, but also to. a wide circle
of art-lovers to whom his pictures made a powerful
appeal, and especially to the Newlyn Colony, among
whom he lived and worked for some ten years at
the outset of his distinguished career. It was from
Newlyn that he sent to the Academy of 1888 the
picture which brought him prominently before the
world—A Hopeless Dawn. The canvas was singled
out for purchase under the terms of the Chantrey
Bequest. Six years later he was elected Associate
of the Royal Academy, of which he became a full
member in 1911. Besides his numerous subject-
pictures, which owed as much of their interest to