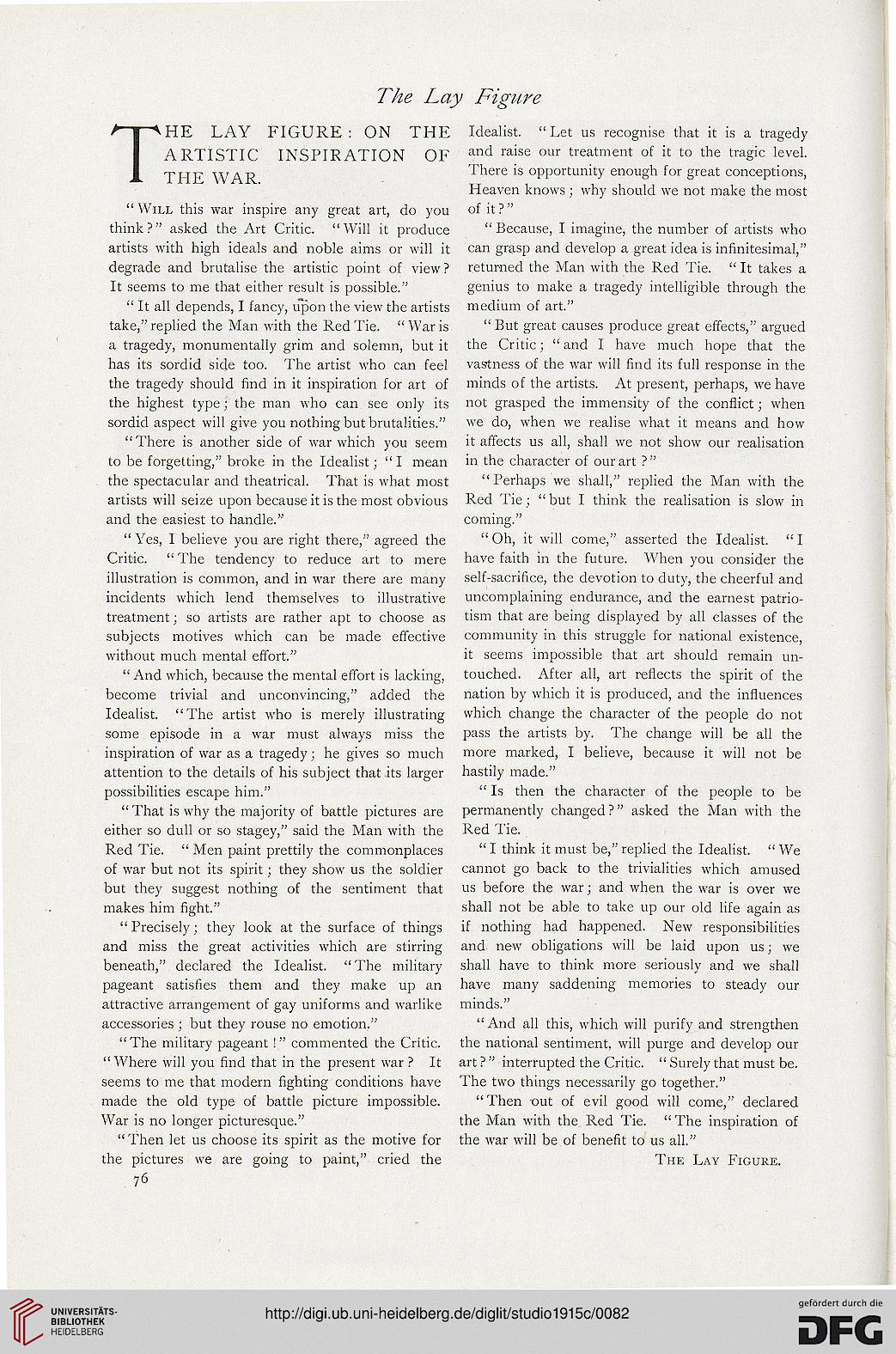 ARTISTIC INSPIRATION OF
THE WAR.

“ Will this war inspire any great art, do you
think?” asked the Art Critic. “Will it produce
artists with high ideals and noble aims or will it
degrade and brutalise the artistic point of view?
It seems to me that either result is possible.”

“ It all depends, I fancy, upon the view the artists
take,” replied the Man with the Red Tie. “War is
a tragedy, monumentally grim and solemn, but it
has its sordid side too. The artist who can feel
the tragedy should find in it inspiration for art of
the highest type; the man who can see only its
sordid aspect will give you nothing but brutalities.”
“There is another side of war which you seem
to be forgetting,” broke in the Idealist; “ I mean
the spectacular and theatrical. That is what most
artists will seize upon because it is the most obvious
and the easiest to handle.”

“ Yes, I believe you are right there,” agreed the
Critic. “ The tendency to reduce art to mere
illustration is common, and in war there are many
incidents which lend themselves to illustrative
treatment; so artists are rather apt to choose as
subjects motives which can be made effective
without much mental effort.”

“ And which, because the mental effort is lacking,
become trivial and unconvincing,” added the
Idealist. “The artist who is merely illustrating
some episode in a war must always miss the
inspiration of war as a tragedy; he gives so much
attention to the details of his subject that its larger
possibilities escape him.”

“ That is why the majority of battle pictures are
either so dull or so stagey,” said the Man with the
Red Tie. “ Men paint prettily the commonplaces
of war but not its spirit; they show us the soldier
but they suggest nothing of the sentiment that
makes him fight.”

“ Precisely; they look at the surface of things
and miss the great activities which are stirring
beneath,” declared the Idealist. “The military
pageant satisfies them and they make up an
attractive arrangement of gay uniforms and warlike
accessories ; but they rouse no emotion,”

“The military pageant1” commented the Critic.

“ Where will you find that in the present war ? It
seems to me that modern fighting conditions have
made the old type of battle picture impossible.
War is no longer picturesque.”

“ Then let us choose its spirit as the motive for
the pictures we are going to paint,” cried the
76

Idealist. “ Let us recognise that it is a tragedy
and raise our treatment of it to the tragic level.
There is opportunity enough for great conceptions,
Heaven knows; why should we not make the most
of it ? ”

“ Because, I imagine, the number of artists who
can grasp and develop a great idea is infinitesimal,”
returned the Man with the Red Tie. “ It takes a
genius to make a tragedy intelligible through the
medium of art.”

“ But great causes produce great effects,” argued
the Critic; “ and I have much hope that the
vastness of the war will find its full response in the
minds of the artists. At present, perhaps, we have
not grasped the immensity of the conflict; when
we do, when we realise what it means and how
it affects us all, shall we not show our realisation
in the character of our art ? ”

“Perhaps we shall,” replied the Man with the
Red Tie ; “but I think the realisation is slow in
coming.”

“ Oh, it will come,” asserted the Idealist. “ I
have faith in the future. When you consider the
self-sacrifice, the devotion to duty, the cheerful and
uncomplaining endurance, and the earnest patrio-
tism that are being displayed by all classes of the
community in this struggle for national existence,
it seems impossible that art should remain un-
touched. After all, art reflects the spirit of the
nation by which it is produced, and the influences
which change the character of the people do not
pass the artists by. The change will be all the
more marked, I believe, because it will not be
hastily made.”

“ Is then the character of the people to be
permanently changed?” asked the Man with the
Red Tie.

“ I think it must be,” replied the Idealist. “ We
cannot go back to the trivialities which amused
us before the war; and when the war is over we
shall not be able to take up our old life again as
if nothing had happened. New responsibilities
and new obligations will be laid upon us; we
shall have to think more seriously and we shall
have many saddening memories to steady our
minds.”

“ And all this, which will purify and strengthen
the national sentiment, will purge and develop our
art ? ” interrupted the Critic. “ Surely that must be.
The two things necessarily go together.”

“ Then out of evil good will come,” declared
the Man with the Red Tie. “ The inspiration of
the war will be of benefit to us all.”