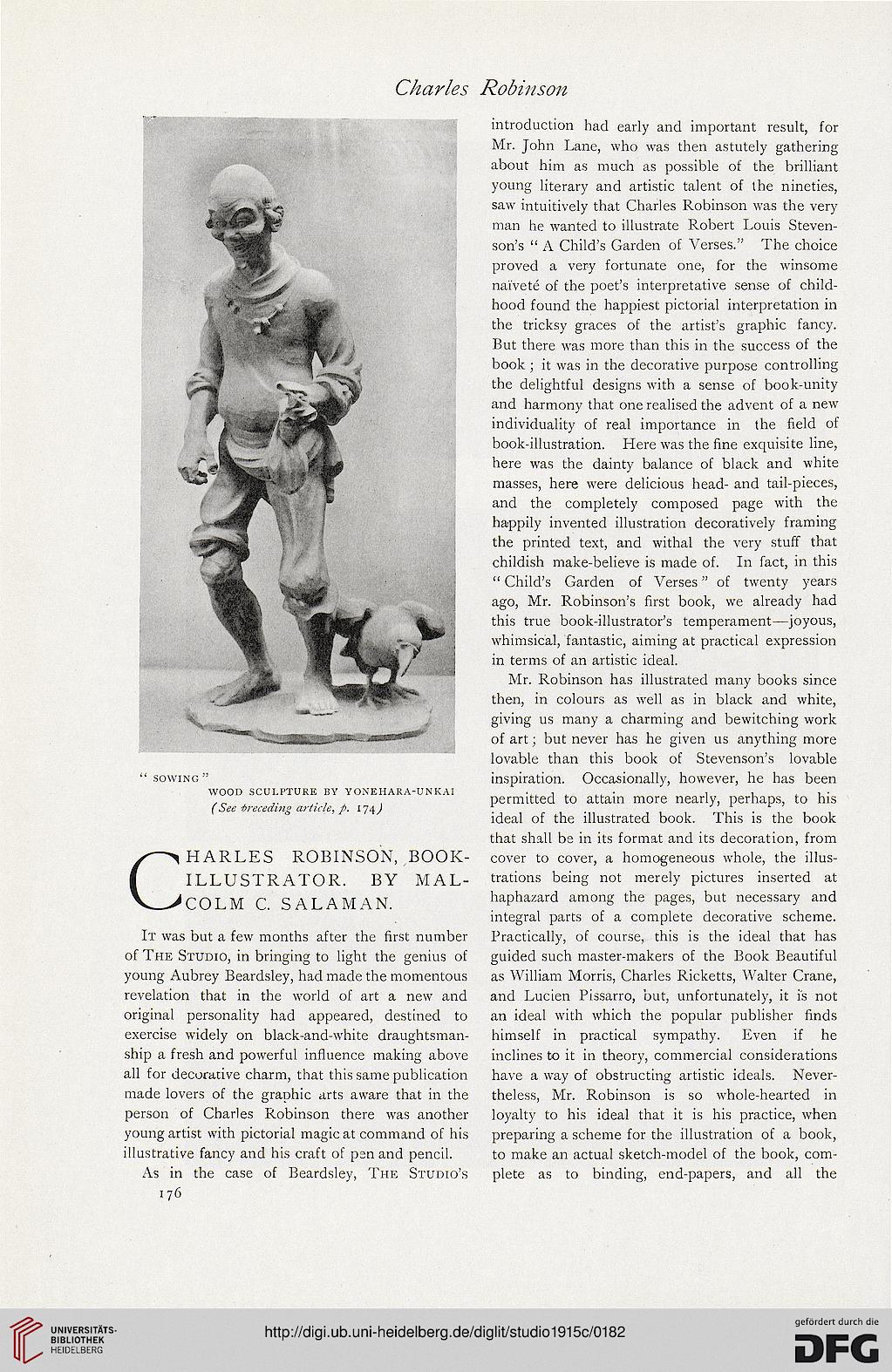 It was but a few months after the first number
of The Studio, in bringing to light the genius of
young Aubrey Beardsley, had made the momentous
revelation that in the world of art a new and
original personality had appeared, destined to
exercise widely on black-and-white draughtsman-
ship a fresh and powerful influence making above
all for decorative charm, that this same publication
made lovers of the graphic arts aware that in the
person of Charles Robinson there was another
young artist with pictorial magic at command of his
illustrative fancy and his craft of pen and pencil.

As in the case of Beardsley, The Studio’s

introduction had early and important result, for
Mr. John Lane, who was then astutely gathering
about him as much as possible of the brilliant
young literary and artistic talent of the nineties,
saw intuitively that Charles Robinson was the very
man he wanted to illustrate Robert Louis Steven-
son’s “ A Child’s Garden of Verses.” The choice
proved a very fortunate one, for the winsome
naivete of the poet’s interpretative sense of child-
hood found the happiest pictorial interpretation in
the tricksy graces of the artist’s graphic fancy.
But there was more than this in the success of the
book ; it was in the decorative purpose controlling
the delightful designs with a sense of book-unity
and harmony that one realised the advent of a new
individuality of real importance in the field of
book-illustration. Here was the fine exquisite line,
here was the dainty balance of black and white
masses, here were delicious head- and tail-pieces,
and the completely composed page with the
happily invented illustration decoratively framing
the printed text, and withal the very stuff that
childish make-believe is made of. In fact, in this
“ Child’s Garden of Verses ” of twenty years
ago, Mr. Robinson’s first book, we already had
this true book-illustrator’s temperament—joyous,
whimsical, fantastic, aiming at practical expression
in terms of an artistic ideal.

Mr. Robinson has illustrated many books since
then, in colours as well as in black and white,
giving us many a charming and bewitching work
of art; but never has he given us anything more
lovable than this book of Stevenson’s lovable
inspiration. Occasionally, however, he has been
permitted to attain more nearly, perhaps, to his
ideal of the illustrated book. This is the book
that shall be in its format and its decoration, from
cover to cover, a homogeneous whole, the illus-
trations being not merely pictures inserted at
haphazard among the pages, but necessary and
integral parts of a complete decorative scheme.
Practically, of course, this is the ideal that has
guided such master-makers of the Book Beautiful
as William Morris, Charles Ricketts, Walter Crane,
and Lucien Pissarro, but, unfortunately, it is not
an ideal with which the popular publisher finds
himself in practical sympathy. Even if he
inclines to it in theory, commercial considerations
have a way of obstructing artistic ideals. Never-
theless, Mr. Robinson is so whole-hearted in
loyalty to his ideal that it is his practice, when
preparing a scheme for the illustration of a book,
to make an actual sketch-model of the book, com-
plete as to binding, end-papers, and all the