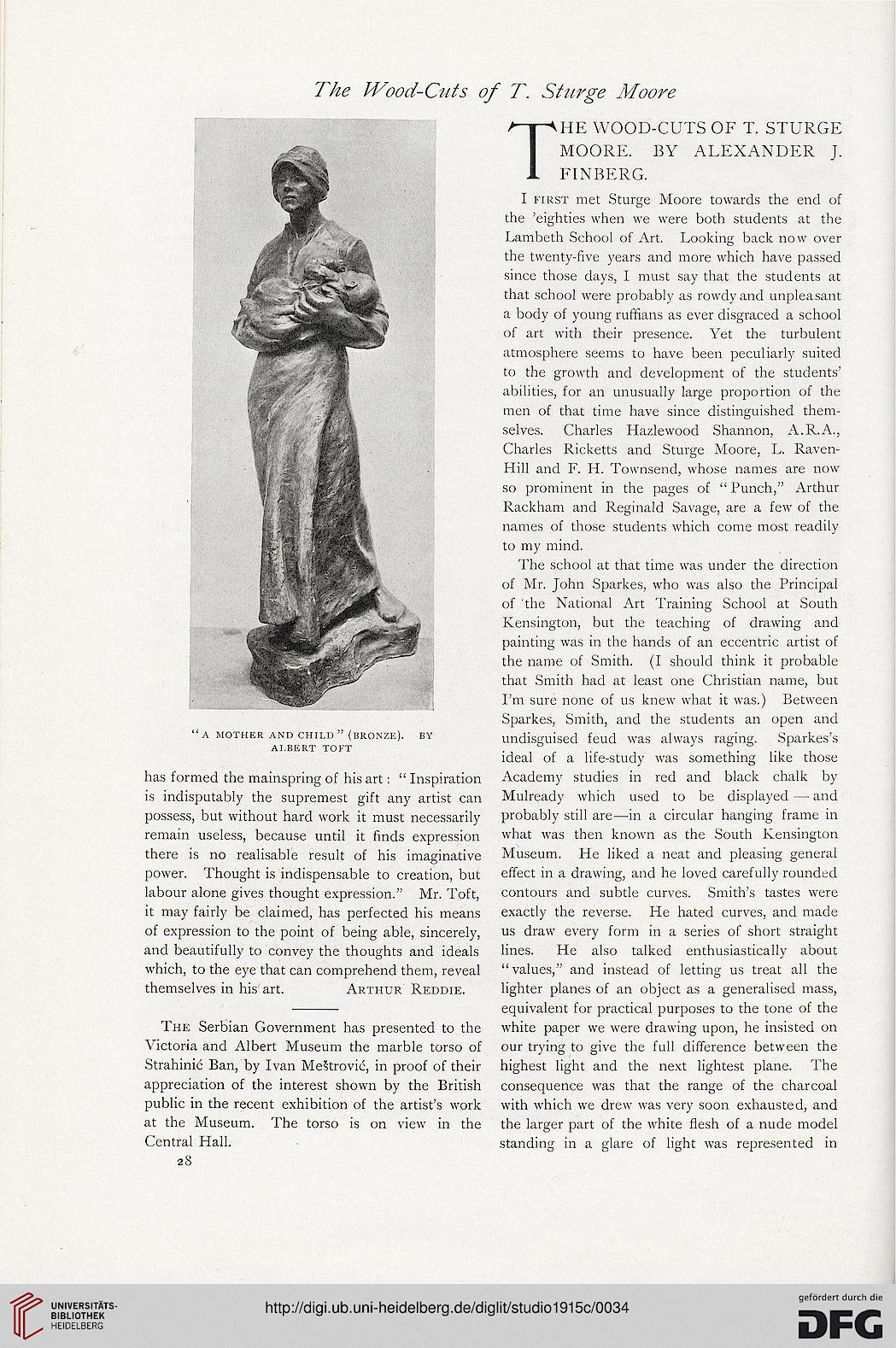 “ A MOTHER AND CHILD ” (BRONZE). BY
ALBERT TOFT

has formed the mainspring of his art: “ Inspiration
is indisputably the supremest gift any artist can
possess, but without hard work it must necessarily
remain useless, because until it finds expression
there is no realisable result of his imaginative
power. Thought is indispensable to creation, but
labour alone gives thought expression.” Mr. Toft,
it may fairly be claimed, has perfected his means
of expression to the point of being able, sincerely,
and beautifully to convey the thoughts and ideals
which, to the eye that can comprehend them, reveal
themselves in his art. Arthur Reddie.

The Serbian Government has presented to the
Victoria and Albert Museum the marble torso of
Strahinic Ban, by Ivan MeStrovic, in proof of their
appreciation of the interest shown by the British
public in the recent exhibition of the artist’s work
at the Museum. The torso is on view in the
Central Hall.

The wood-cuts of t. sturge

I first met Sturge Moore towards the end of
the ’eighties when we were both students at the
Lambeth School of Art. Looking back now over
the twenty-five years and more which have passed
since those days, I must say that the students at
that school were probably as rowdy and unpleasant
a body of young ruffians as ever disgraced a school
of art with their presence. Yet the turbulent
atmosphere seems to have been peculiarly suited
to the growth and development of the students’
abilities, for an unusually large proportion of the
men of that time have since distinguished them-
selves. Charles Hazlewood Shannon, A.R.A.,
Charles Ricketts and Sturge Moore, L. Raven-
Hill and F. H. Townsend, whose names are now
so prominent in the pages of “Punch,” Arthur
Rackham and Reginald Savage, are a few of the
names of those students which come most readily
to my mind.

The school at that time was under the direction
of Mr. John Sparkes, who was also the Principal
of 'the National Art Training School at South
Kensington, but the teaching of drawing and
painting was in the hands of an eccentric artist of
the name of Smith. (I should think it probable
that Smith had at least one Christian name, but
I’m sure none of us knew what it was.) Between
Sparkes, Smith, and the students an open and
undisguised feud was always raging. Sparkes’s
ideal of a life-study was something like those
Academy studies in red and black chalk by
Mulready which used to be displayed — and
probably still are—in a circular hanging frame in
what was then known as the South Kensington
Museum. He liked a neat and pleasing general
effect in a drawing, and he loved carefully rounded
contours and subtle curves. Smith’s tastes were
exactly the reverse. He hated curves, and made
us draw every form in a series of short straight
lines. He also talked enthusiastically about
“ values,” and instead of letting us treat all the
lighter planes of an object as a generalised mass,
equivalent for practical purposes to the tone of the
white paper we were drawing upon, he insisted on
our trying to give the full difference between the
highest light and the next lightest plane. The
consequence was that the range of the charcoal
with which we drew was very soon exhausted, and
the larger part of the white flesh of a nude model
standing in a glare of light was represented in