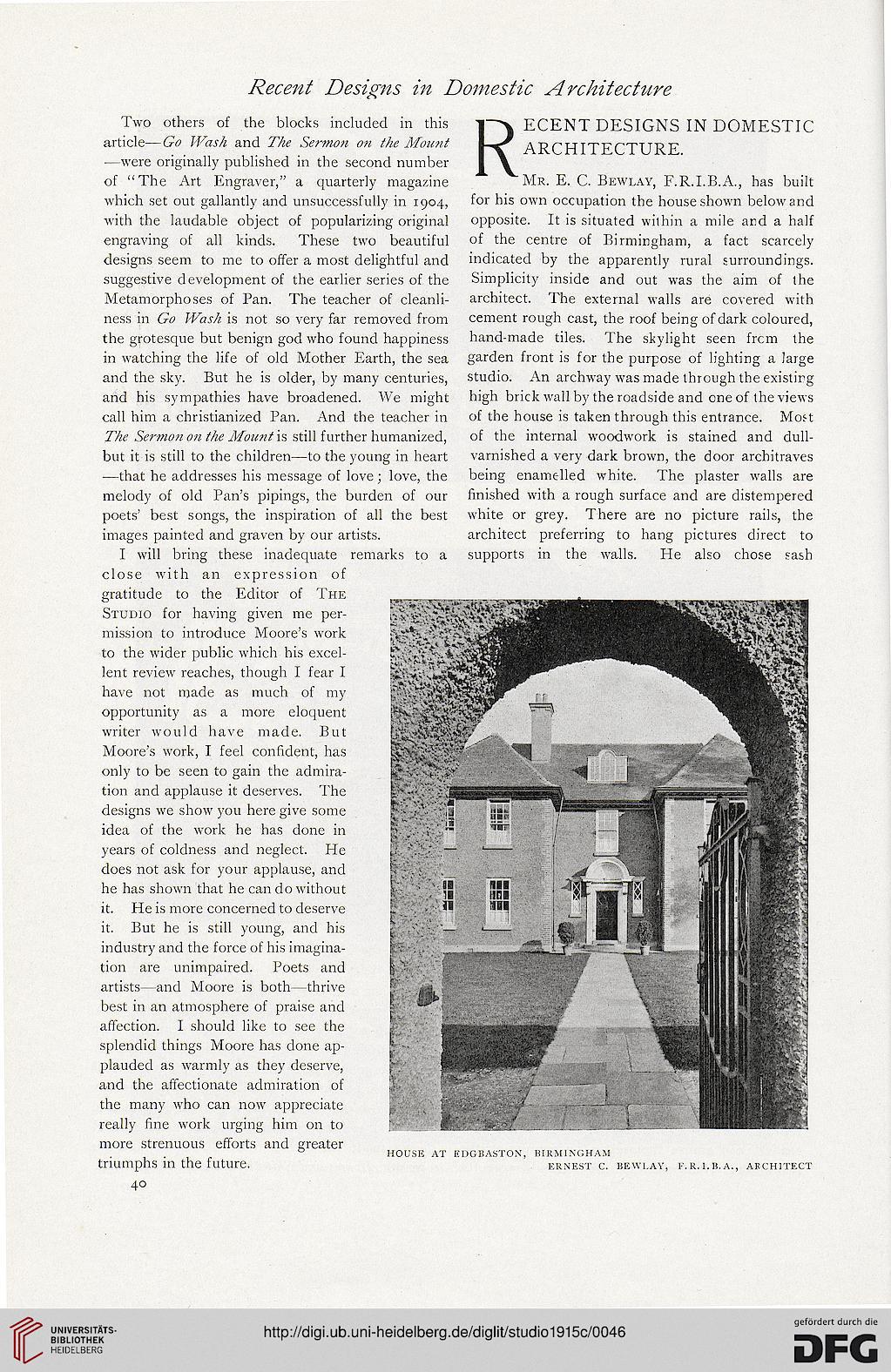 Two others of the blocks included in this
article—Go Wash and The Sermon on the Mount
—were originally published in the second number
of “The Art Engraver,” a quarterly magazine
which set out gallantly and unsuccessfully in 1904,
with the laudable object of popularizing original
engraving of all kinds. These two beautiful
designs seem to me to offer a most delightful and
suggestive development of the earlier series of the
Metamorphoses of Pan. The teacher of cleanli-
ness in Go Wash is not so very far removed from
the grotesque but benign god who found happiness
in watching the life of old Mother Earth, the sea
and the sky. But he is older, by many centuries,
and his sympathies have broadened. We might
call him a christianized Pan. And the teacher in
The Sermon on the Mount is still further humanized,
but it is still to the children—to the young in heart
—that he addresses his message of love ; love, the
melody of old Pan’s pipings, the burden of our
poets’ best songs, the inspiration of all the best
images painted and graven by our artists.

I will bring these inadequate remarks to a
close with an expression of
gratitude to the Editor of The
Studio for having given me per-
mission to introduce Moore’s work
to the wider public which his excel-
lent review reaches, though I fear I
have not made as much of my
opportunity as a more eloquent
writer would have made. But
Moore’s work, I feel confident, has
only to be seen to gain the admira-
tion and applause it deserves. The
designs we show you here give some
idea of the work he has done in
years of coldness and neglect. He
does not ask for your applause, and
he has shown that he can do without
it. He is more concerned to deserve
it. But he is still young, and his
industry and the force of his imagina-
tion are unimpaired. Poets and
artists—and Moore is both—thrive
best in an atmosphere of praise and
affection. I should like to see the
splendid things Moore has done ap-
plauded as warmly as they deserve,
and the affectionate admiration of
the many who can now appreciate
really fine work urging him on to
more strenuous efforts and greater
triumphs in the future.

Mr. E. C. Bewlay, F.R.I.B.A., has built
for his own occupation the house shown below and
opposite. It is situated within a mile and a half
of the centre of Birmingham, a fact scarcely
indicated by the apparently rural surroundings.
Simplicity inside and out was the aim of the
architect. The external walls are covered with
cement rough cast, the roof being of dark coloured,
hand-made tiles. The skylight seen frcm the
garden front is for the purpose of lighting a large
studio. An archway was made through the existing
high brick wall by the roadside and one of the views
of the house is taken through this entrance. Most
of the internal woodwork is stained and dull-
varnished a very dark brown, the door architraves
being enamelled white. The plaster walls are
finished with a rough surface and are distempered
white or grey. There are no picture rails, the
architect preferring to hang pictures direct to
supports in the walls. He also chose sash