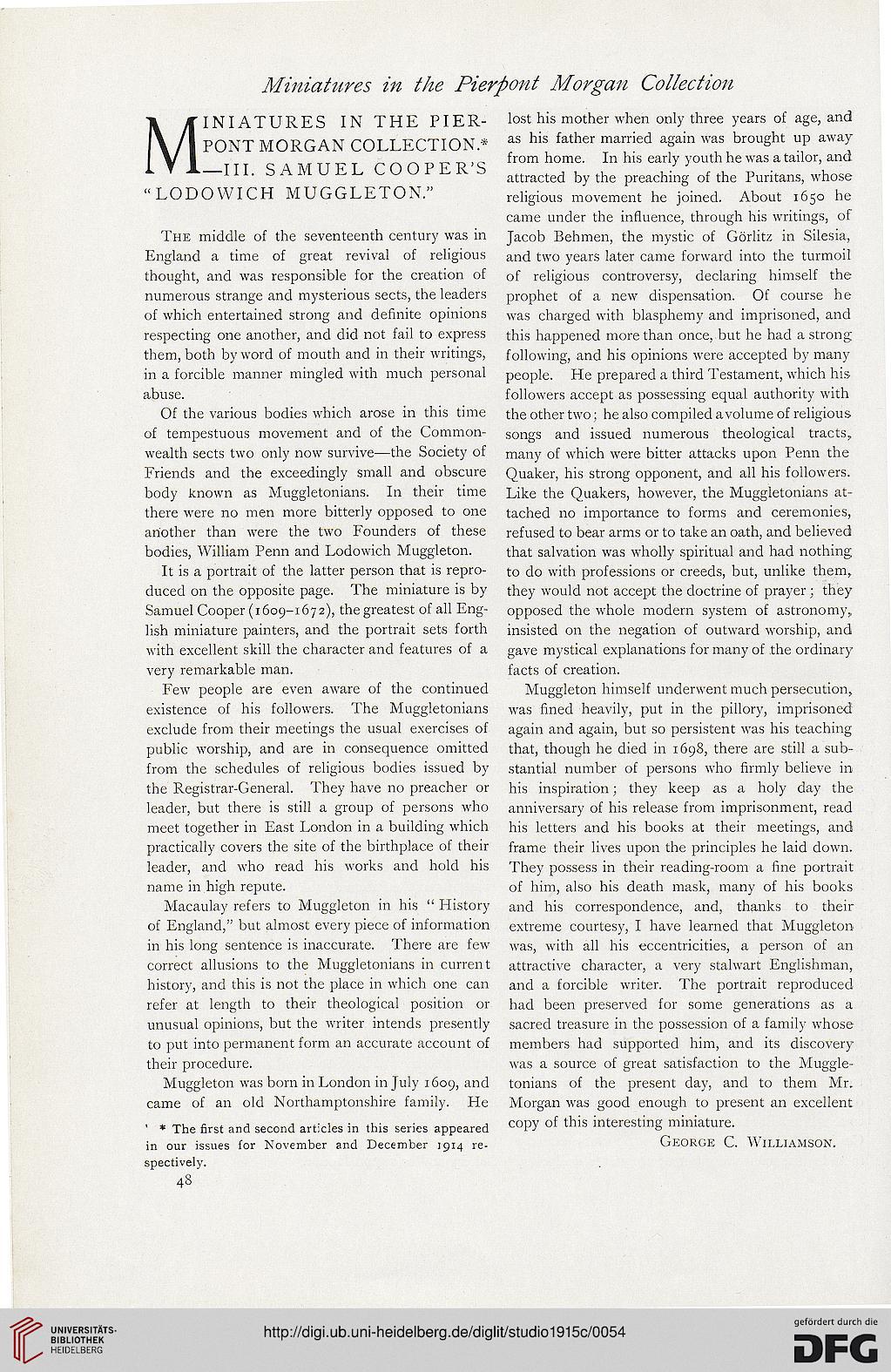 The middle of the seventeenth century was in
England a time of great revival of religious
thought, and was responsible for the creation of
numerous strange and mysterious sects, the leaders
of which entertained strong and definite opinions
respecting one another, and did not fail to express
them, both by word of mouth and in their writings,
in a forcible manner mingled with much personal
abuse.

Of the various bodies which arose in this time
of tempestuous movement and of the Common-
wealth sects two only now survive—the Society of
Friends and the exceedingly small and obscure
body known as Muggletonians. In their time
there were no men more bitterly opposed to one
another than were the two Founders of these
bodies, William Penn and Lodowich Muggleton.

It is a portrait of the latter person that is repro-
duced on the opposite page. The miniature is by
Samuel Cooper (1609-1672), the greatest of all Eng-
lish miniature painters, and the portrait sets forth
with excellent skill the character and features of a
very remarkable man.

Few people are even aware of the continued
existence of his followers. The Muggletonians
exclude from their meetings the usual exercises of
public worship, and are in consequence omitted
from the schedules of religious bodies issued by
the Registrar-General. They have no preacher or
leader, but there is still a group of persons who
meet together in East London in a building which
practically covers the site of the birthplace of their
leader, and who read his works and hold his
name in high repute.

Macaulay refers to Muggleton in his “ History
of England,” but almost every piece of information
in his long sentence is inaccurate. There are few
correct allusions to the Muggletonians in current
history, and this is not the place in which one can
refer at length to their theological position or
unusual opinions, but the writer intends presently
to put into permanent form an accurate account of
their procedure.

Muggleton was born in London in July 1609, and
came of an old Northamptonshire family. He

' * The first and second articles in this series appeared
in our issues for November and December 1914 re-
spectively.

lost his mother when only three years of age, and
as his father married again was brought up away
from home. In his early youth he was a tailor, and
attracted by the preaching of the Puritans, whose
religious movement he joined. About 1650 he
came under the influence, through his writings, of
Jacob Behmen, the mystic of Gorlitz in Silesia,
and two years later came forward into the turmoil
of religious controversy, declaring himself the
prophet of a new dispensation. Of course he
was charged with blasphemy and imprisoned, and
this happened more than once, but he had a strong
following, and his opinions were accepted by many
people. He prepared a third Testament, which his
followers accept as possessing equal authority with
the other two; he also compiled a volume of religious
songs and issued numerous theological tracts,
many of which were bitter attacks upon Penn the
Quaker, his strong opponent, and all his followers.
Like the Quakers, however, the Muggletonians at-
tached no importance to forms and ceremonies,
refused to bear arms or to take an oath, and believed
that salvation was wholly spiritual and had nothing
to do with professions or creeds, but, unlike them,
they would not accept the doctrine of prayer; they
opposed the whole modern system of astronomy,
insisted on the negation of outward worship, and
gave mystical explanations for many of the ordinary
facts of creation.

Muggleton himself underwent much persecution,
was fined heavily, put in the pillory, imprisoned
again and again, but so persistent was his teaching
that, though he died in 1698, there are still a sub-
stantial number of persons who firmly believe in
his inspiration; they keep as a holy day the
anniversary of his release from imprisonment, read
his letters and his books at their meetings, and
frame their lives upon the principles he laid down.
They possess in their reading-room a fine portrait
of him, also his death mask, many of his books
and his correspondence, and, thanks to their
extreme courtesy, I have learned that Muggleton
was, with all his eccentricities, a person of an
attractive character, a very stalwart Englishman,
and a forcible writer. The portrait reproduced
had been preserved for some generations as a
sacred treasure in the possession of a family whose
members had supported him, and its discovery
was a source of great satisfaction to the Muggle-
tonians of the present day, and to them Mr.
Morgan was good enough to present an excellent
copy of this interesting miniature.