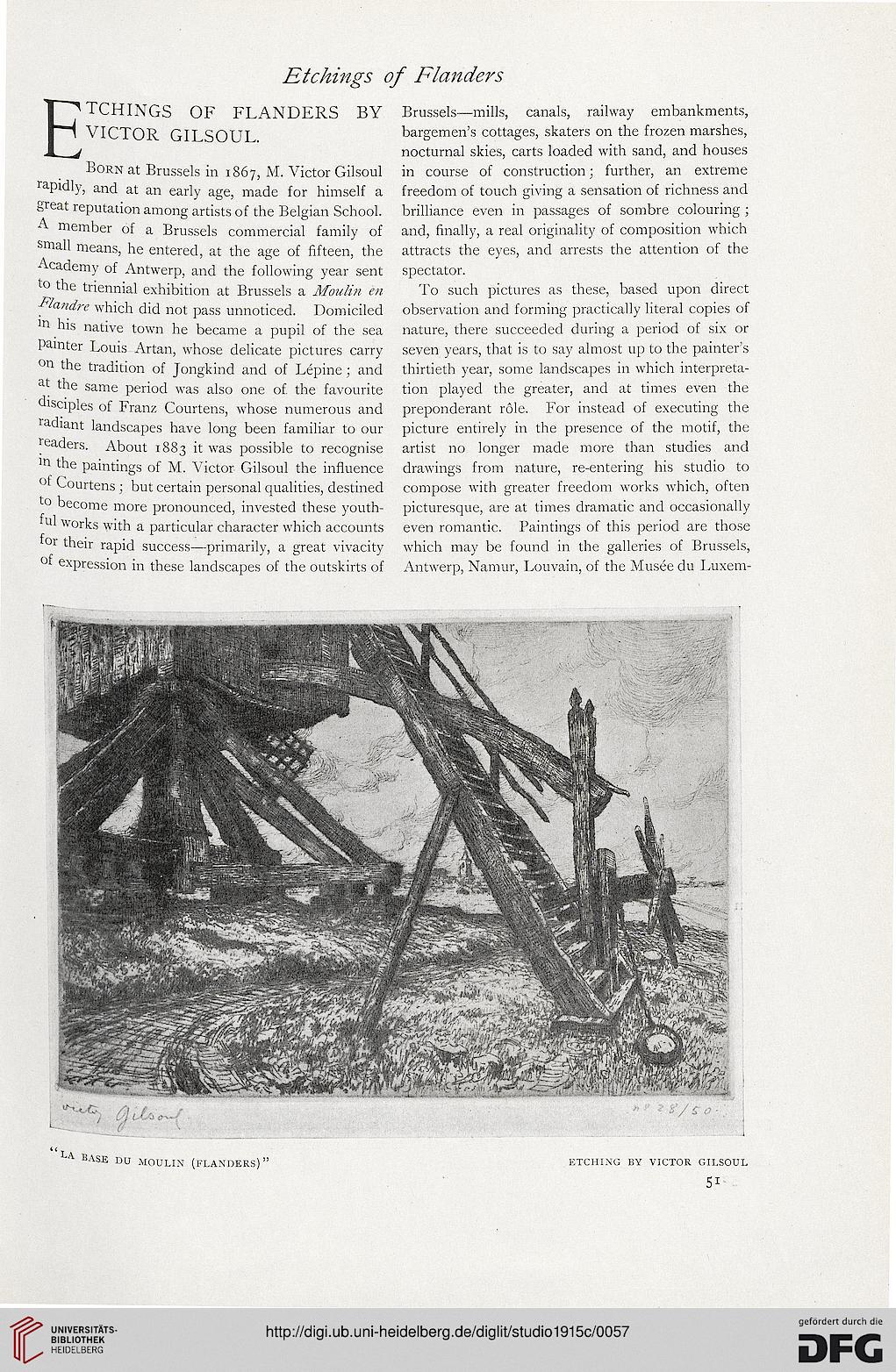 Etchings of flanders by

Born at Brussels in 1867, M. Victor Gilsoul
rapidly, and at an early age, made for himself a
great reputation among artists of the Belgian School.
A member of a Brussels commercial family of
small means, he entered, at the age of fifteen, the
Academy of Antwerp, and the following year sent
to the triennial exhibition at Brussels a Moulin en
Flandre which did not pass unnoticed. Domiciled
m his native town he became a pupil of the sea
Painter Louis Artan, whose delicate pictures carry
°n the tradition of Jongkind and of Lepine; and
at the same period was also one of. the favourite
disciples of Franz Courtens, whose numerous and
radiant landscapes have long been familiar to our
readers. About 1883 it was possible to recognise
'n the paintings of M. Victor Gilsoul the influence
°f Courtens ; but certain personal qualities, destined
to become more pronounced, invested these youth-
ful works with a particular character which accounts
for their rapid success—primarily, a great vivacity
of expression in these landscapes of the outskirts of

Brussels—mills, canals, railway embankments,
bargemen’s cottages, skaters on the frozen marshes,
nocturnal skies, carts loaded with sand, and houses
in course of construction; further, an extreme
freedom of touch giving a sensation of richness and
brilliance even in passages of sombre colouring ;
and, finally, a real originality of composition which
attracts the eyes, and arrests the attention of the
spectator.

To such pictures as these, based upon direct
observation and forming practically literal copies of
nature, there succeeded during a period of six or
seven years, that is to say almost up to the painter’s
thirtieth year, some landscapes in which interpreta-
tion played the greater, and at times even the
preponderant r61e. For instead of executing the
picture entirely in the presence of the motif, the
artist no longer made more than studies and
drawings from nature, re-entering his studio to
compose with greater freedom works which, often
picturesque, are at times dramatic and occasionally
even romantic. Paintings of this period are those
which may be found in the galleries of Brussels,
Antwerp, Namur, Louvain, of the Musee du Luxem-