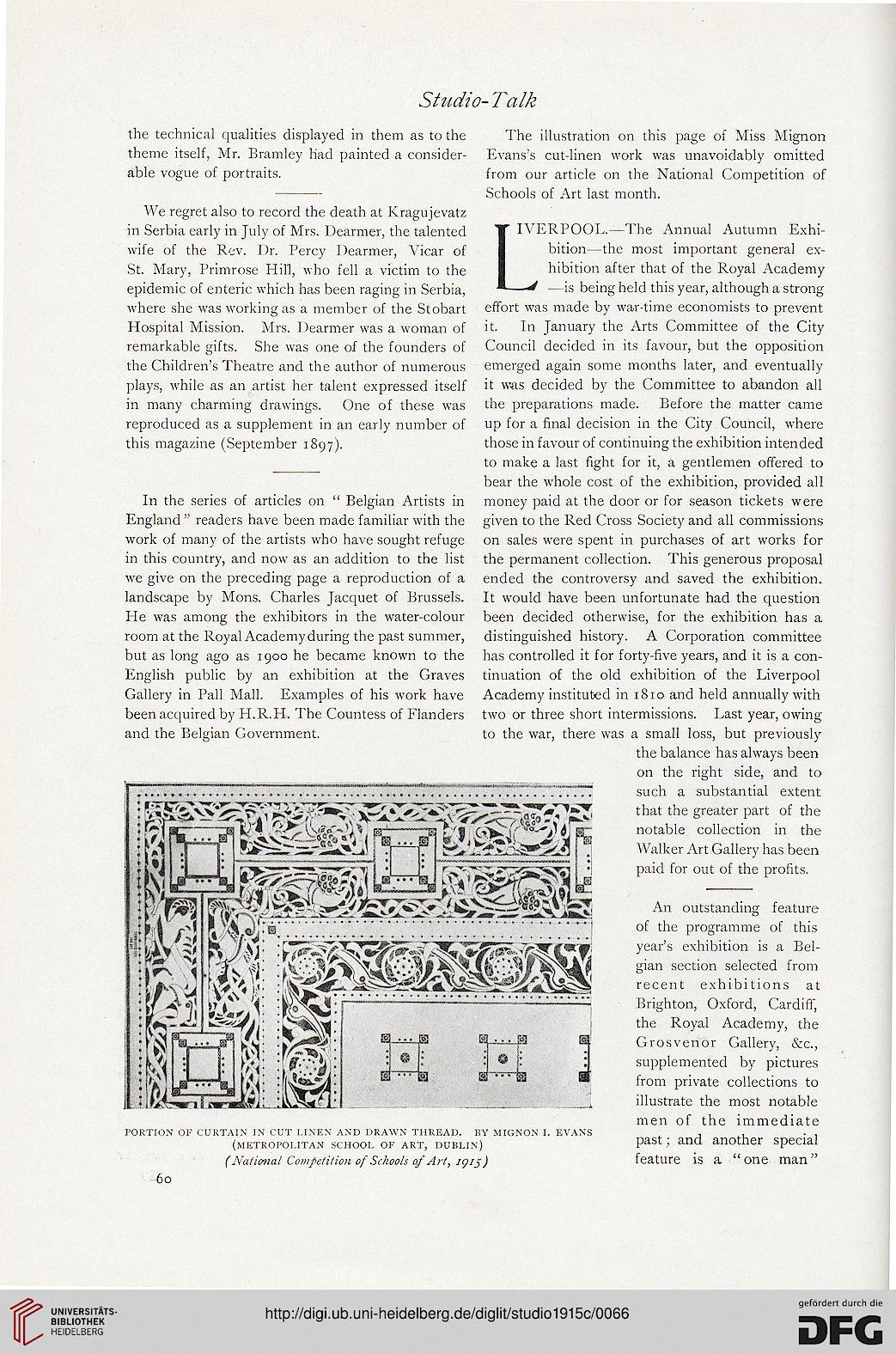 the technical qualities displayed in them as to the
theme itself, Mr. Bramley had painted a consider-
able vogue of portraits.

The illustration on this page of Miss Mignon
Evans’s cut-linen work was unavoidably omitted
from our article on the National Competition of
Schools of Art last month.

We regret also to record the death at Kragujevatz
in Serbia early in July of Mrs. Dearmer, the talented
wife of the Rev. Dr. Percy Dearmer, Vicar of
St. Mary, Primrose Hill, who fell a victim to the
epidemic of enteric which has been raging in Serbia,
where she was working as a member of the Stobart
Hospital Mission. Mrs. Dearmer was a woman of
remarkable gifts. She was one of the founders of
the Children’s Theatre and the author of numerous
plays, while as an artist her talent expressed itself
in many charming drawings. One of these was
reproduced as a supplement in an early number of
this magazine (September 1897).

In the series of articles on “ Belgian Artists in
England ” readers have been made familiar with the
work of many of the artists who have sought refuge
in this country, and now as an addition to the list
we give on the preceding page a reproduction of a
landscape by Mons. Charles Jacquet of Brussels.
He was among the exhibitors in the water-colour
room at the Royal Academy during the past summer,
but as long ago as 1900 he became known to the
English public by an exhibition at the Graves
Gallery in Pall Mall. Examples of his work have
been acquired by H.R.H. The Countess of Flanders
and the Belgian Government.

IVERPOOL.—The Annual Autumn Exhi-
bition—the most important general ex-
hibition after that of the Royal Academy
—is being held this year, although a strong
effort was made by war-time economists to prevent
it. In January the Arts Committee of the City
Council decided in its favour, but the opposition
emerged again some months later, and eventually
it was decided by the Committee to abandon all
the preparations made. Before the matter came
up for a final decision in the City Council, where
those in favour of continuing the exhibition intended
to make a last fight for it, a gentlemen offered to
bear the whole cost of the exhibition, provided all
money paid at the door or for season tickets were
given to the Red Cross Society and all commissions
on sales were spent in purchases of art works for
the permanent collection. This generous proposal
ended the controversy and saved the exhibition.
It would have been unfortunate had the question
been decided otherwise, for the exhibition has a
distinguished history. A Corporation committee
has controlled it for forty-five years, and it is a con-
tinuation of the old exhibition of the Liverpool
Academy instituted in 1810 and held annually with
two or three short intermissions. Last year, owing
to the war, there was a small loss, but previously
the balance has always been
on the right side, and to
such a substantial extent
that the greater part of the
notable collection in the
Walker Art Gallery has been
paid for out of the profits.

PORTION OF CURTAIN IN CUT LINEN AND DRAWN THREAD. BY MIGNON I. EVANS
(METROPOLITAN SCHOOL OF ART, DUBLIN)

(National Competition of Schools of Art, 1915)

An outstanding feature
of the programme of this
year’s exhibition is a Bel-
gian section selected from
recent exhibitions at
Brighton, Oxford, Cardiff,
the Royal Academy, the
Grosvenor Gallery, &c.,
supplemented by pictures
from private collections to
illustrate the most notable
men of the immediate
past; and another special
feature is a “ one man ”