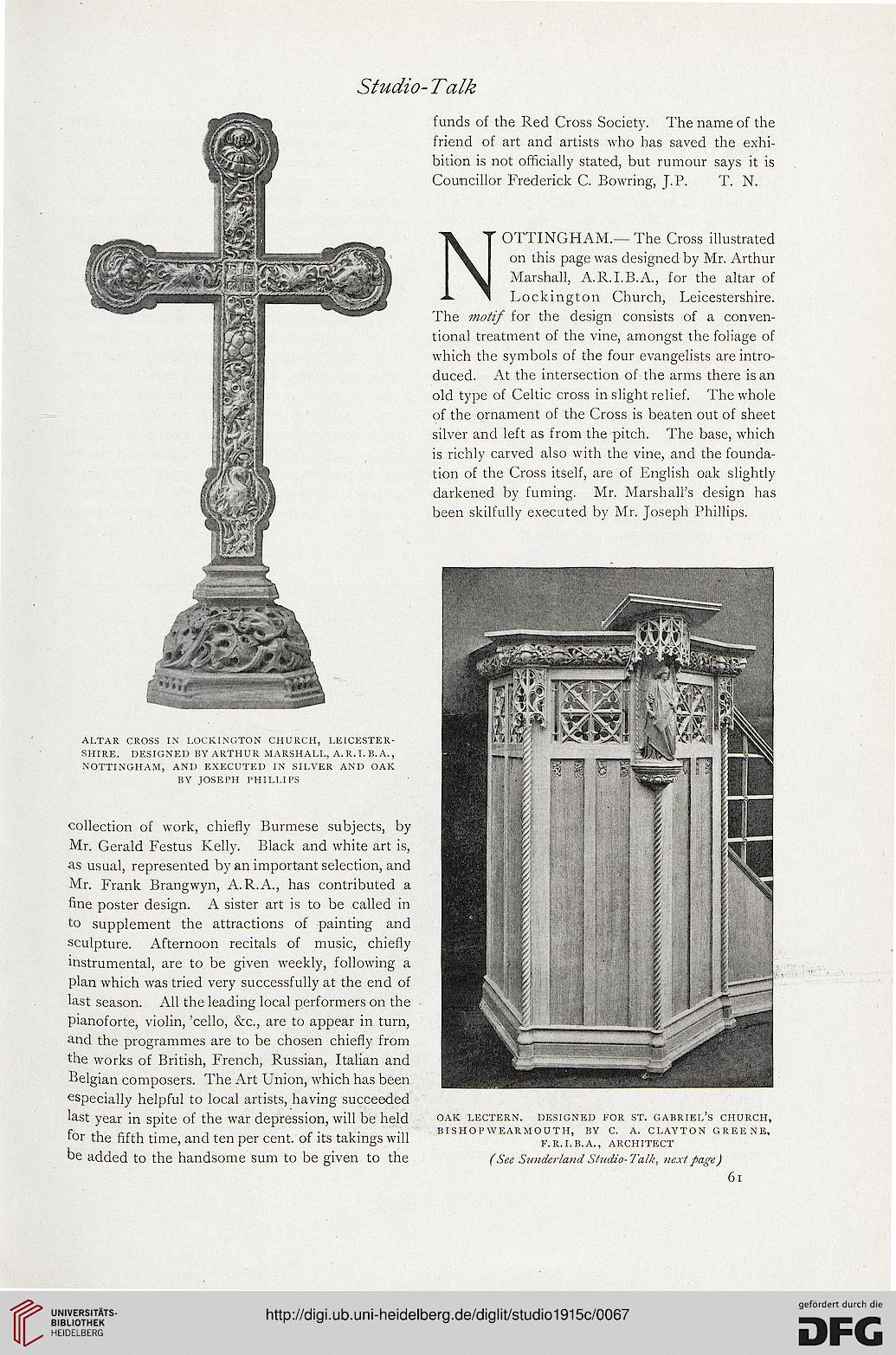 ALTAR CROSS IN LOCKINGTON CHURCH, LEICESTER-
SHIRE. DESIGNED BY ARTHUR MARSHALL, A.R.I.B. A.,
NOTTINGHAM, AND EXECUTED IN SILVER AND OAK
BY JOSEPH PHILLIPS

collection of work, chiefly Burmese subjects, by
Mr. Gerald Festus Kelly. Black and white art is,
as usual, represented by an important selection, and
Mr. Frank Brangwyn, A.R.A., has contributed a
fine poster design. A sister art is to be called in
to supplement the attractions of painting and
sculpture. Afternoon recitals of music, chiefly
instrumental, are to be given weekly, following a
plan which was tried very successfully at the end of
last season. All the leading local performers on the
pianoforte, violin, ’cello, &c., are to appear in turn,
and the programmes are to be chosen chiefly from
the works of British, French, Russian, Italian and
Belgian composers. The Art Union, which has been
especially helpful to local artists, having succeeded
last year in spite of the war depression, will be held
for the fifth time, and ten per cent, of its takings will
t>e added to the handsome sum to be given to the

funds of the Red Cross Society. The name of the
friend of art and artists who has saved the exhi-
bition is not officially stated, but rumour says it is
Councillor Frederick C. Bowring, J.P. T. N.

NOTTINGHAM.— The Cross illustrated
on this page was designed by Mr. Arthur
Marshall, A.R.I.B.A., for the altar of
Lockington Church, Leicestershire.
The motif for the design consists of a conven-
tional treatment of the vine, amongst the foliage of
which the symbols of the four evangelists are intro-
duced. At the intersection of the arms there is an
old type of Celtic cross in slight relief. The whole
of the ornament of the Cross is beaten out of sheet
silver and left as from the pitch. The base, which
is richly carved also with the vine, and the founda-
tion of the Cross itself, are of English oak slightly
darkened by fuming. Mr. Marshall’s design has
been skilfully executed by Mr. Joseph Phillips.