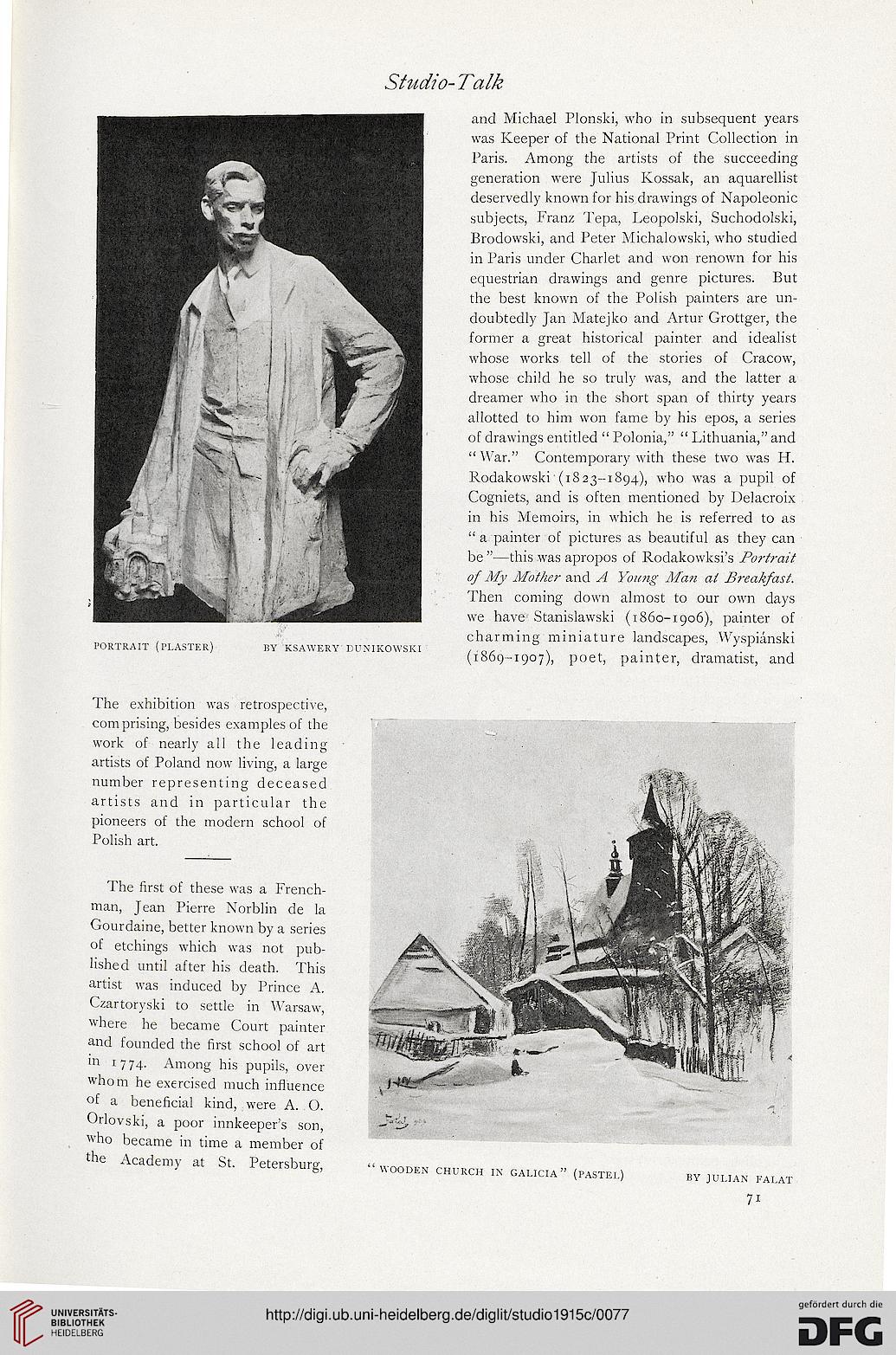 and Michael Plonski, who in subsequent years
was Keeper of the National Print Collection in
Paris. Among the artists of the succeeding
generation were Julius Kossak, an aquarellist
deservedly known for his drawings of Napoleonic
subjects, Franz Tepa, Leopolski, Suchodolski,
Brodowski, and Peter Michalowski, who studied
in Paris under Charlet and won renown for his
equestrian drawings and genre pictures. But
the best known of the Polish painters are un-
doubtedly Jan Matejko and Artur Grottger, the
former a great historical painter and idealist
whose works tell of the stories of Cracow,
whose child he so truly was, and the latter a
dreamer who in the short span of thirty years
allotted to him won fame by his epos, a series
of drawings entitled “ Polonia,” “ Lithuania,” and
“ War.” Contemporary with these two was H.
Rodakowski (1823-1894), who was a pupil of
Cogniets, and is often mentioned by Delacroix
in his Memoirs, in which he is referred to as
“ a painter of pictures as beautiful as they can
be ”—this was apropos of Rodakowksi’s Portrait
of My Mother and A Young Man at Breakfast.
Then coming down almost to our own days
we have; Stanislawski (1860-1906), painter of
charming miniature landscapes, Wyspianski

The exhibition was retrospective,
comprising, besides examples of the
work of nearly all the leading
artists of Poland now living, a large
number representing deceased
artists and in particular the
pioneers of the modern school of
Polish art.

The first of these was a French-
man, Jean Pierre Norblin de la
Gourdaine, better known by a series
of etchings which was not pub-
lished until after his death. This
artist was induced by Prince A.
Czartoryski to settle in Warsaw,
where he became Court painter
and founded the first school of art
in 1774. Among his pupils, over
whom he exercised much influence
of a beneficial kind, were A. O.
Orlovski, a poor innkeeper’s son,
who became in time a member of
the Academy at St. Petersburg,