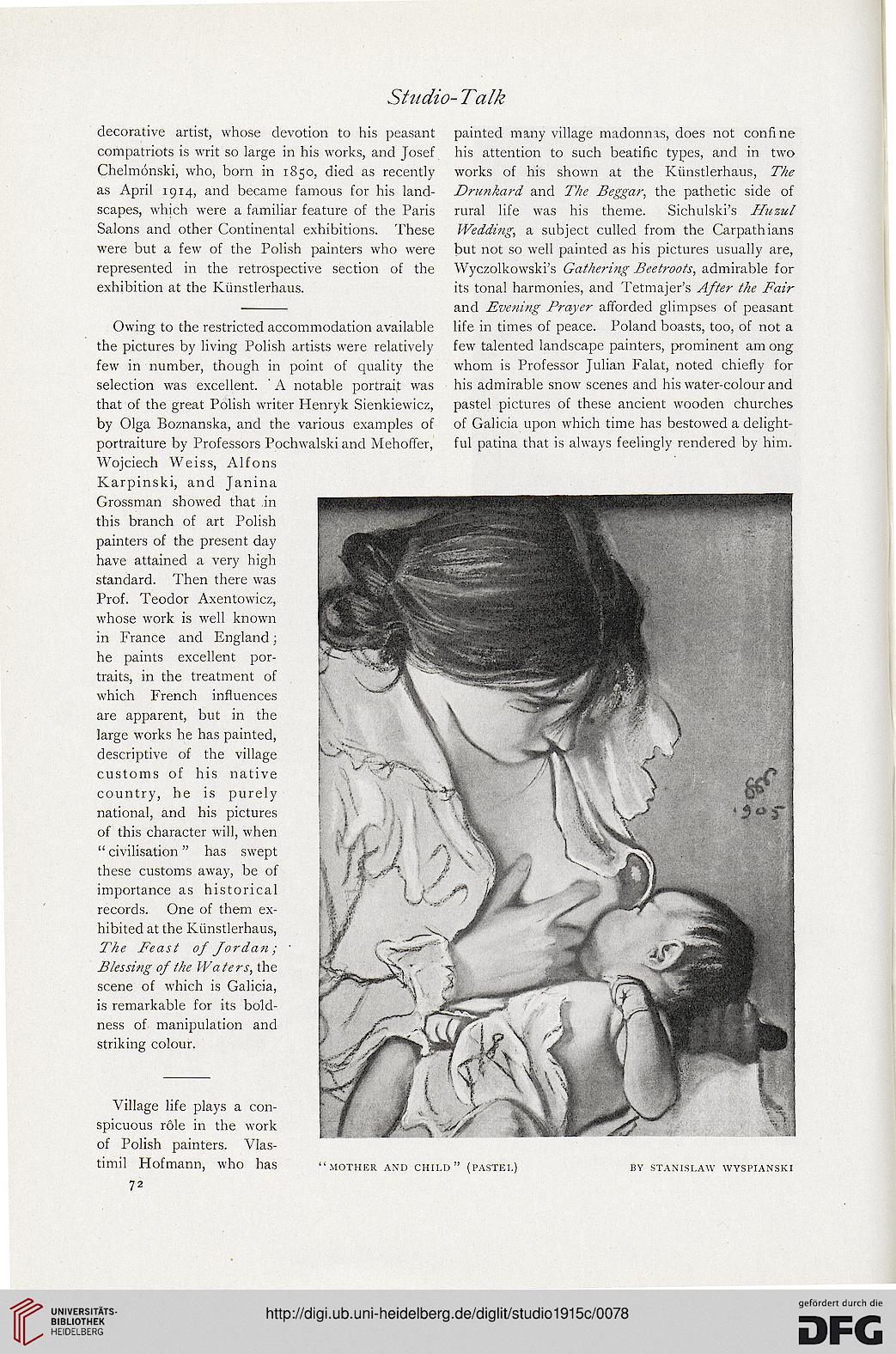 decorative artist, whose devotion to his peasant
compatriots is writ so large in his works, and Josef
Chelmonski, who, born in 1850, died as recently
as April 1914, and became famous for his land-
scapes, which were a familiar feature of the Paris
Salons and other Continental exhibitions. These
were but a few of the Polish painters who were
represented in the retrospective section of the
exhibition at the Kiinstlerhaus.

Owing to the restricted accommodation available
the pictures by living Polish artists were relatively
few in number, though in point of quality the
selection was excellent. ' A notable portrait was
that of the great Polish writer Henryk Sienkiewicz,
by Olga Boznanska, and the various examples of
portraiture by Professors Pochwalski and Mehoffer,
Wojciech Weiss, Alfons
Karpinski, and Janina
Grossman showed that in
this branch of art Polish
painters of the present day
have attained a very high
standard. Then there was
Prof. Teodor Axentowicz,
whose work is well known
in France and England;
he paints excellent por-
traits, in the treatment of
which French influences
are apparent, but in the
large works he has painted,
descriptive of the village
customs of his native
country, he is purely
national, and his pictures
of this character will, when
“ civilisation ” has swept
these customs away, be of
importance as historical
records. One of them ex-
hibited at the Kiinstlerhaus,

The Feast of Jordan; '

Blessing of the Waters, the
scene of which is Galicia,
is remarkable for its bold-
ness of manipulation and
striking colour.

painted many village madonnas, does not confine
his attention to such beatific types, and in two
works of his shown at the Kiinstlerhaus, The
Drunkard and The Beggar, the pathetic side of
rural life was his theme. Sichulski’s Huzul
Wedding, a subject culled from the Carpathians
but not so well painted as his pictures usually are,
Wyczolkowski’s Gathering Beetroots, admirable for
its tonal harmonies, and Tetmajer’s After the Fair
and Evening Prayer afforded glimpses of peasant
life in times of peace. Poland boasts, too, of not a
few talented landscape painters, prominent am ong
whom is Professor Julian Falat, noted chiefly for
his admirable snow scenes and his water-colour and
pastel pictures of these ancient wooden churches
of Galicia upon which time has bestowed a delight-
ful patina that is always feelingly rendered by him.

Village life plays a con-
spicuous role in the work
of Polish painters. Vlas-
timil Hofmann, who has
72