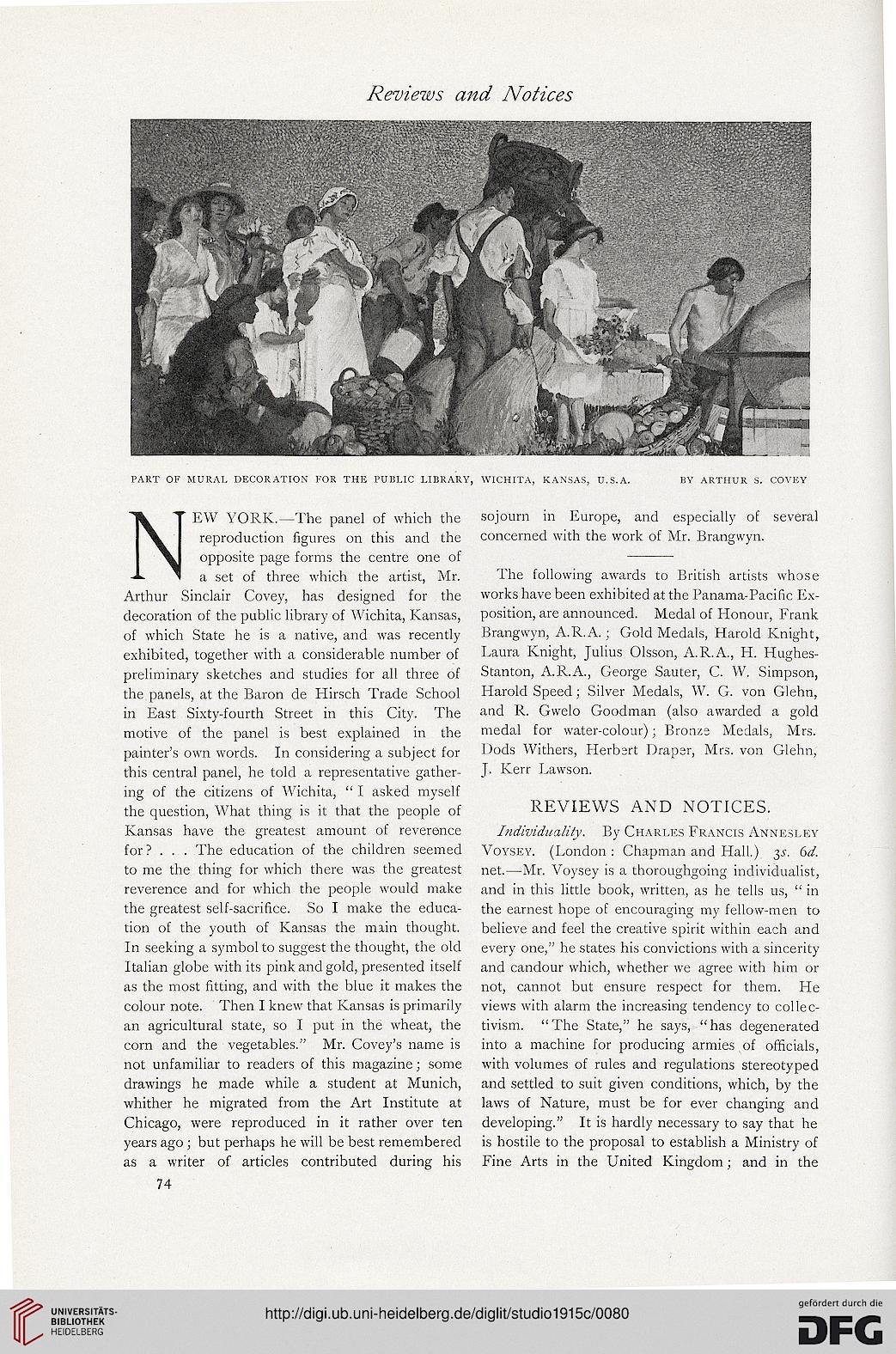 NEW YORK.—The panel of which the
reproduction figures on this and the
opposite page forms the centre one of
a set of three which the artist, Mr.
Arthur Sinclair Covey, has designed for the
decoration of the public library of Wichita, Kansas,
of which State he is a native, and was recently
exhibited, together with a considerable number of
preliminary sketches and studies for all three of
the panels, at the Baron de Hirsch Trade School
in East Sixty-fourth Street in this City. The
motive of the panel is best explained in the
painter’s own words. In considering a subject for
this central panel, he told a representative gather-
ing of the citizens of Wichita, “ I asked myself
the question, What thing is it that the people of
Kansas have the greatest amount of reverence
for ? . . . The education of the children seemed
to me the thing for which there was the greatest
reverence and for which the people would make
the greatest self-sacrifice. So I make the educa-
tion of the youth of Kansas the main thought.
In seeking a symbol to suggest the thought, the old
Italian globe with its pink and gold, presented itself
as the most fitting, and with the blue it makes the
colour note. Then I knew that Kansas is primarily
an agricultural state, so I put in the wheat, the
corn and the vegetables.” Mr. Covey’s name is
not unfamiliar to readers of this magazine; some
drawings he made while a student at Munich,
whither he migrated from the Art Institute at
Chicago, were reproduced in it rather over ten
years ago ; but perhaps he will be best remembered
as a writer of articles contributed during his
74

sojourn in Europe, and especially of several
concerned with the work of Mr. Brangwyn.

Individuality. By Charles Francis Annesley
Voysey. (London : Chapman and Hall.) 3s. 6d.
net.—Mr. Voysey is a thoroughgoing individualist,
and in this little book, written, as he tells us, “ in
the earnest hope of encouraging my fellow-men to
believe and feel the creative spirit within each and
every one,” he states his convictions with a sincerity
and candour which, whether we agree with him or
not, cannot but ensure respect for them. He
views with alarm the increasing tendency to collec-
tivism. “The State,” he says, “has degenerated
into a machine for producing armies of officials,
with volumes of rules and regulations stereotyped
and settled to suit given conditions, which, by the
laws of Nature, must be for ever changing and
developing.” It is hardly necessary to say that he
is hostile to the proposal to establish a Ministry of
Fine Arts in the United Kingdom ; and in the