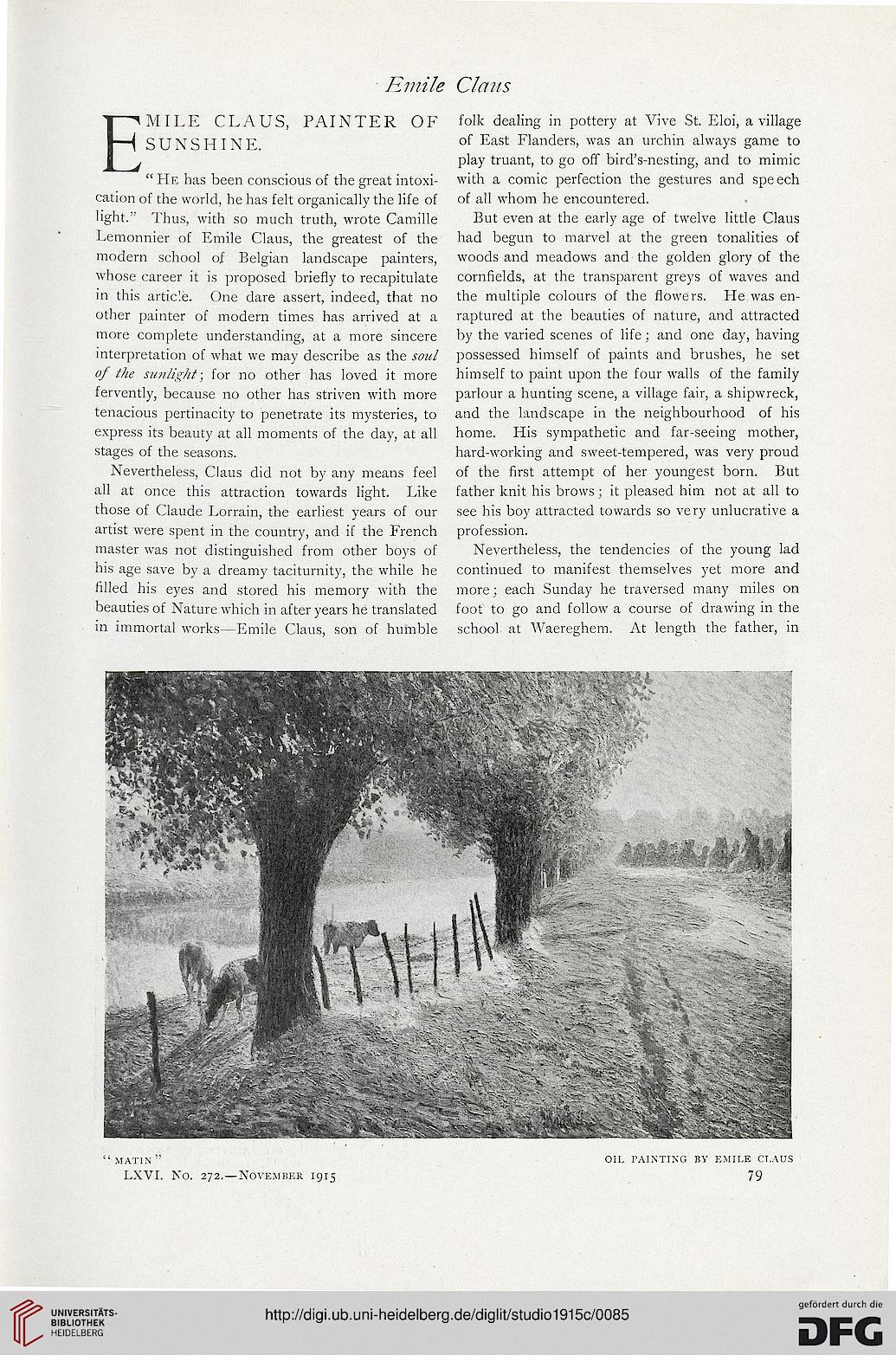 “ He has been conscious of the great intoxi-
cation of the world, he has felt organically the life of
light.” Thus, with so much truth, wrote Camille
Lemonnier of Emile Claus, the greatest of the
modern school of Belgian landscape painters,
whose career it is proposed briefly to recapitulate
in this article. One dare assert, indeed, that no
other painter of modern times has arrived at a
more complete understanding, at a more sincere
interpretation of what we may describe as the soul
of the sunlight; for no other has loved it more
fervently, because no other has striven with more
tenacious pertinacity to penetrate its mysteries, to
express its beauty at all moments of the day, at all
stages of the seasons.

Nevertheless, Claus did not by any means feel
all at once this attraction towards light. Like
those of Claude Lorrain, the earliest years of our
artist were spent in the country, and if the French
master was not distinguished from other boys of
his age save by a dreamy taciturnity, the while he
filled his eyes and stored his memory with the
beauties of Nature which in after years he translated
in immortal works—Emile Claus, son of humble

folk dealing in pottery at Vive St. Eloi, a village
of East Flanders, was an urchin always game to
play truant, to go off bird’s-nesting, and to mimic
with a comic perfection the gestures and speech
of all whom he encountered.

But even at the early age of twelve little Claus
had begun to marvel at the green tonalities of
woods and meadows and the golden glory of the
cornfields, at the transparent greys of waves and
the multiple colours of the flowers. He was en-
raptured at the beauties of nature, and attracted
by the varied scenes of life; and one day, having
possessed himself of paints and brushes, he set
himself to paint upon the four walls of the family
parlour a hunting scene, a village fair, a shipwreck,
and the landscape in the neighbourhood of his
home. His sympathetic and far-seeing mother,
hard-working and sweet-tempered, was very proud
of the first attempt of her youngest born. But
father knit his brows; it pleased him not at all to
see his boy attracted towards so very unlucrative a
profession.

Nevertheless, the tendencies of the young lad
continued to manifest themselves yet more and
more; each Sunday he traversed many miles on
foot to go and follow a course of drawing in the
school at Waereghem. At length the father, in